When I was a small child, I knew exactly three things about the Soviet Union: their country was extremely large, their national anthem was intimidating, and their hockey players were extremely talented. As I got older, became more globally aware, and the Iron Curtain fell, I remained curious about the only country in the world larger than Canada. 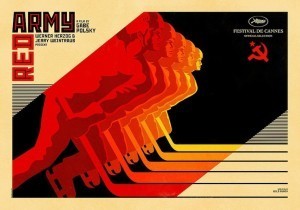 In particular, I found it fascinating how a country that seemed so very similar to Canada in several ways – their love of hockey, their climate, their geography, and their country’s physical size – could actually be so different. Gabe Polsky’s documentary Red Army, out now on DVD and video-on-demand, provides a lot of insight into those differences through an examination of the rise and fall of CSKA Moscow hockey club – better known to the world as Central Red Army.

The primary method of exploring Soviet hockey history is through a lengthy interview with hockey legend Viacheslav “Slava” Fetisov. Easily the most compelling part of the film, Fetisov retells the early parts of his hockey career; from throwing on skates for the first time as a poor youngster in Moscow, through his ascendance through the Soviet hockey ranks. Polsky is also able to use Fetisov’s experiences as a way of exploring the larger arc of Soviet hockey history; from the establishment of the national team program by Anatoli Tarasov, through his mid-’70s ouster and eventual replacement by Viktor Tikhonov, and then the changes to the hockey program that occurred as Soviet Union began to crumble.

The involvement of Fetisov in this film is extremely fortunate for many reasons. He’s a unique figure in Soviet hockey history, having come up just at the end of the Tarasov area and experiencing the majority of the Tikhonov reign as head of the national team. He’s able to explain the Soviet playing systems and their strengths and weaknesses, and he has a unique perspective of the downsides of the Soviet program under Tikhonov – and explains why players would’ve wanted to leave for the NHL.

The most interesting sequence of the film is an examination of the Red Army’s famed Russian Five: Fetisov and defensive partner Alexei Kasatonov, along with forwards Sergei Makarov, Igor Larionov and Vladimir Krutov. There are a series of interviews with and about each player, and the filmmakers manage to chronicle the success they had with the Soviet team, the growth of their desires to move to North America, and some explanations for their struggles in the NHL playing a foreign style of hockey. Legendary NHL coach Scotty Bowman is also featured, noting the challenges the Russian players had in the NHL and the adjustments that were made in Detroit – basically just letting them all play the style they were used to – that allowed them to have success with the Red wings.

Red Army goes a long way towards making the complex social, economic and political factors influencing the changes in Soviet hockey relatively straightforward. The film meshes archival footage and interviews extremely well. At times it glosses over some history – for instance, suggesting that Red Army coaching job went directly from Tarasov to Tikhonov – but focuses on the importance of the broader narrative rather than getting caught up in the minor details.

At its best, it’s a compelling and eye-opening look at why the Soviet Union’s hockey teams were so incredibly good, and also why they eventually deteriorated as the country changed throughout the 1980s and 1990s. At its worse, it’s a somewhat sanitized view of history, told primarily from the perspective of Slava Fetisov.

Either way, it’s a tremendously entertaining and insightful film, and a must-see for fans of international hockey.