Buffalo was among eight or nine teams that were in the running for the 2016 Frozen Four Most Outstanding Player. Caggiula recorded 25 goals and 51 points for the Fighting Hawks and leading them to a National Championship. The 21-year-old forward was part of the Sabres Prospect Development Camp back in 2014. This connection made some feel the Sabres had a good chance at the college free agent, but it wasn’t enough to lure him to Buffalo. Now that the Sabres have missed out on Caggiula they’ll shift their focus to the next item on the agenda.

The Sabres found out last week that they’ll officially be selecting eighth overall in the 2016 NHL Draft. If they remain in the eight spot, the focus will very likely be picking a defenseman. A few of the top defenders at the top of the draft the Sabres could be interested in are Sarnia Sting’s Jakob Chychrun, London Knights Olli Juolevi and Windsor Spitfires Mikhail Sergachev. The forward depth in the organization is pretty good with Hudson Fasching, Justin Bailey, Nick Baptiste and Giorgio Estephan. The depth on the blue line is pretty thin outside of Brendan Guhle and Will Borgen.

Buffalo can also look into the options trading their first round pick. They could move up or down the draft board depending on how they view the three previously mentioned defenders. Also, General Manager Tim Murray could explore the option of trading out of the eighth pick entirely. Instead of drafting a young blueliner, Murray, could look to trade the pick to acquire a veteran defenseman and more draft picks. It would have to be a great offer for the Sabres to completely move out of eight spot with the draft taking place in Buffalo. Murray indicated he would prefer to have a pick in the first round, but wouldn’t rule a trade under the correct circumstances. Plenty of options are available to the Sabres as the draft approaches

Buffalo will also begin to focus on the upcoming free agent class. The first part of this will be making decisions and signing their current restricted-free-agents. The Sabres signed one RFA last week in Johan Larsson to a one year contract. The other big RFA’s that still need to be addressed are Rasmus Ristolainen, Marcus Foligno, Nic Deslauries, Zemgus Girgensons, Casey Nelson and Jake McCabe. Other players are also on the RFA list, but these are the big ones. Ristolainen and Girgensons will be the big ones to watch. Ristolainen, is due for a big pay-day and it’ll be interesting to see the approach the Sabres take in an extension. Girgensons, on the other hand is surrounded with uncertainty. Does Buffalo look to resign the former first round pick or move him as part of a bigger trade package? Both the Sabres and Girgensons seem to be lost on where he fits on the roster, which is leading to the speculation.

Girgensons: "I talked to GM and coach before I left, and they are unsure where they want me to play, wing on center but that's for next year

The unrestricted-free-agent market is another area where the Sabres will begin to firm up their targets. Steven Stamkos is of course the potential top player that’ll be available. If he hits the market Buffalo will certainly be in the running and should have a legitimate chance to sign the high scoring forward. 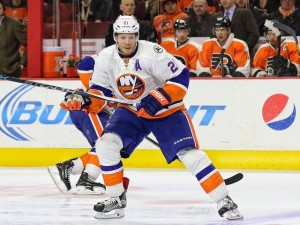 Outside of Stamkos, a few other players could be on the Sabres radar. In the hopes of approving the top six, Buffalo, could target such players as Kyle Okposo, Loui Eriksson and Jamie McGinn. Also, the Sabres will keep an eye on another college free agent in Harvard forward Jimmy Vesey. The 2016 Hobey Baker award winner has entertained the idea of playing with USA Hockey friend Eichel according to reports. Vesey is definitely an option as he’ll hit free agency in August, but currently seems like a long shot. Reports have indicated he’s likely signing with either the Boston Bruins or Toronto Maple Leafs.

Sometimes tough to gauge the validity of these things, but there are whispers of Jimmy Vesey interest in Buffalo, and playing w/Jack Eichel

Caggiula didn’t work out for Buffalo, but they have plenty of other options to explore to upgrade their team. They’ll not shift their focus to those options and as the draft approaches things should start to get interesting for the Sabres.