The American Hockey League opens its 82nd season on Friday, Oct. 6. Between then and mid-April, 30 teams will play a total of 1,116 games.

This season will be an interesting one in the AHL. Several teams have relocated. The Laval Rocket join the league after moving from St. John’s as the AHL affiliate of the Montreal Canadiens. The Ottawa Senators’ farm team has moved to Belleville, ON. The New Jersey Devils’ affiliate moved from Albany to Binghamton, NY.

Which AHL games should you put on your calendar for the upcoming season? Here are seven of note.

This game is one of six on the AHL’s opening day and marks a new start for both teams. The Rocket host this one, opening their first AHL season. They’ll play at Place Bell, a newly-constructed, three-rink arena. The teams will also face off the following night in Laval.

Don’t miss the action as prospects of the Canadiens and Senators face off to start the AHL season. One player to watch may be the Rocket’s Charles Hudon, who had 57 points last season. Hudon could make the Canadiens, but if not, will be a force in the AHL.

In addition, it’s Belleville’s first AHL season. However, the Senators face a lengthy road trip to start the season. They’ll play the first nine games on the road. Keep an eye on their first home game November 1 against the Crunch. Hockey will return to Yardmen Arena for the first since the OHL’s Bulls moved out. The arena has undergone a major renovation since 2015.

Both the Devils and Sound Tigers will kick off their seasons on Oct. 7.

The AHL team in Binghamton was affiliated with the Ottawa Senators, but is now affiliated with the New Jersey Devils. The Devils’ affiliate moved from Albany. As such, they’ve moved on from being the “Senators” and have a new name and new look. Their new logo is being revealed July 29. 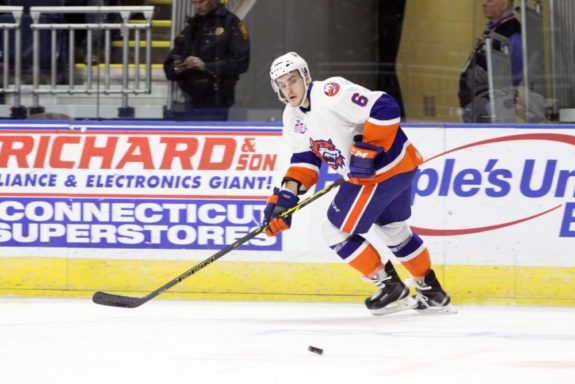 The Sound Tigers remain the affiliate of the New York Islanders. For them, this game kicks off a four-game road trip to start the season.

Despite existing about 213 miles apart, these teams won’t see much of each other. This game is one of two meetings in the season. The Devils will be in the North Division, while the Sound Tigers are in the Atlantic.

By this point, the Wolf Pack and Thunderbirds will be sick of each other. They’ll open the season against each other, and this game will be their eighth meeting of the season in under three months’ time. This should make for a great matchup with plenty of sparks.

These two teams are also the closest in the AHL. Just 27 miles separate the two arenas. It all adds up to a fantastic rivalry likely to have great fan support from both sides. Following this game, the teams meet four more times.

The Thunderbirds won the I-91 rivalry last season with a 6-2-1-1 record against the Wolf Pack. What will happen this season?

For every AHL team, every game matters. That’s even more true for the league’s California teams. These teams play a shorter season than the rest of the league, so every game counts even more.

Between the shorter schedules, the proximity in location and the number of meetings, this game is bound to be an interesting one for a “rivalry game.” Both teams are still fairly new to the AHL but finished top-two in their division last season.

An outdoor hockey game is always one to watch. This game at Hersheypark Stadium will be the 10th outdoor game in AHL history and the second at that rink. It’s also part of Hershey’s commemorative 80th season.

This game will be the Bears’ third outdoor game since 2012. They faced the Phantoms (then of Adirondack) in 2012 in Philadelphia. They also played the Penguins in 2013 at Hersheypark, five years to the day of this game. Over 17,000 fans attended that game.

The AHL’s last two outdoor games were held in California.

Ticket information for the AHL Outdoor Classic will be released at a later time.

Over the past few years, games between the Americans and Comets have gotten interesting. They’re North Division rivals and I-90 rivals. This season, both teams have new head coaches, adding to the intrigue.

Trent Cull is the new head coach for the Comets. He was previously an assistant coach with the Crunch. He replaces Travis Green, who was promoted to head coach of the NHL’s Canucks.

With new management behind both benches, it will be interesting to see how these teams grow. This game will be the 10th and final meeting of the season between the two teams. By this point, playoffs will be on everyone’s minds, and it could be a tight race. This game could be crucial in the playoff standings.

Finally, this game will be another intriguing one to watch. The Bears and Penguins are division rivals. That rivalry also extends to their respective NHL clubs in Washington and Pittsburgh.

Last season, the Penguins were the best team in the regular season. They registered 107 points. Meanwhile, the Bears were third in the division with 97 points.

This game will also be the final game of the season for both teams. It’s possible that playoff standings will already be solidified by this point. However, it could be close, and every point could make the difference.

Check out the full AHL schedule here, and catch the action this season on AHL Live.

26-year-old Queen City native with passions for hockey, writing, and making a difference in the world.