We are now less than three weeks away from the NHL Entry Draft. That means it’s time for our annual steal of the draft. 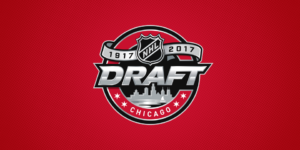 We’ve reviewed hundreds of draft profiles and scanned the rankings. Our goal here is to find one player whose ranking is too low. That player will go later than he deserves, but will offer the value of a first rounder later in his career.

In our first two tries at this, we identified Travis Dermott and William Bitten as steals of the draft. Dermott currently plays for the Toronto Marlies and enjoyed a nice season. It shouldn’t take too long for him to make an impact on the Maple Leafs. Bitten helped the Hamilton Bulldogs get to the playoffs before enduring a heartbreaking, game seven loss at the hands of the Kingston Frontenacs. His offense and work ethic will help him make an impact eventually with the Montreal Canadiens.

As for this season, there’s a player in the Ontario Hockey League that isn’t getting enough attention. His season got off to a slow start thanks to poor play and several turnovers. Once December rolled around, he and the rest of his team finished the second half as the best team in the league.

While all of the attention with the Owen Sound Attack focused on stars like goalie Michael McNiven, forwards Petrus Palmu, Nick Suzuki, Jonah Gadjovich, Kevin Hancock and defenseman Santino Centorame, this season’s steal of the draft helped shore up their defense while providing an offensive spark. He limited his turnovers and ultimately finished the season with 13-30-43, +41 in 66 games.

Our steal of the draft is also no stranger to big games. He was the captain of Team Canada at the Ivan Hlinka tournament in August. They finished fifth in the tournament, but his leadership qualities were on full display. He then captained Team Canada-Red at the under-17 hockey challenge.

Our steal was also the youngest defenseman for Team Canada at the U-18 Hockey Championships. He then played in the CHL/NHL Top Prospects Game. But for some reason, he was not part of the NHL Combine. He ranks in my personal top-50 although he likely goes in the third round or later at the draft. Given his overall improvement and leadership skills, this is highway robbery.

Most recently, I viewed Phillips in the OHL Western Conference Finals. He was mostly solid, outside of the occasional bad turnover. His turnover in Game 4 of that series cost Owen Sound that game and they didn’t win again after being up 2-1.

Although that turnover was a killer, his overall game was much better at that point than earlier in the season. The main reason for that was his improvement at the defensive end. He started winning more puck battles in his own end and was able to start transition plays as a result. The rise of Owen Sound was partly started because of Phillips’ improvement.

He was already known as an offensive defenseman coming into the season. He demonstrated this by more than tripling his point production from last season, going from 12 points to 43 points and from three goals to 13 goals. He’s not afraid to jump in on the rush when needed. He’s much smarter this season about when to do this. Add to that he is one of the best passers in the OHL, and you have a defenseman who can create scoring chances.

Take a quick look at the above tweet from Jeremy Crowe. He showed 14 categories of stats and how CHL-eligible defensemen ranked. Phillips finished first on this list over potential first rounders in Conor Timmins and Nicolas Hague. Bottom line for me is that Phillips produces but doesn’t get the love that some of his peers get.

Phillips is likely a part of Team Canada at the World Junior Championships as well. He’ll have plenty of opportunity to work on his game on the big stage. He’ll also make a run at an OHL Championship with many of Owen Sound’s pieces returning.

All told, this is first-round production at third round prices. That’s a steal. Whomever drafts Phillips gets a great leader who will only improve over time. That team also becomes a draft day winner.