After getting off to a red hot 3-0 start, the Americans were suddenly eliminated from the 2014 World Junior Championship via a 5-3 loss to Russia. What doomed Team USA was undisciplined play and special teams.

From an entertainment standpoint, the opening frame did not disappoint. The teams traded scoring chances as they skated back and forth at a torrid pace. For the first time in the tournament, Team USA surrendered the opening goal, but eventually took a 3-2 lead into the first intermission.

“We came out flying. I thought we had a few good first shifts,” said Team USA defenseman Steven Santini. “We got pucks deep.We executed our game plan.”

The two teams combined for 30 shots in the first period. While the fast pace of the game – which many believe favors the Russian style – may have been a concern going into the first intermission, it’d be special teams that would decide the fate of the two teams.

A part of the American game that was a concern earlier in the tournament once again reared its ugly little head when Team USA began taking undisciplined penalties. The troubles reached a boiling point minutes after the midway point of the game. Team USA surrendered two consecutive 5-on-3 power play opportunities and Russian defenseman Nikita Zadorov wound up cashing in on both opportunities within a span of 1:01.

Confounding the bevy of Team USA penalties was the fact that the once hot American power play had completely fizzled out. After starting the tournament 11-17, the Americans failed to score on their last 10 opportunities.

“We have to give credit to Russia. They did a good job shutting us down,”said Santini in regards to the power play unit.”At the same time, we need a little bit more movement and get more shots to the net.”

How Fast things Can Change

Zadorov’s pair of 5-on-3 goals would be the difference as they put the Russians up 4-3, and they never looked back. The two consecutive losses brought the 2013 champions crashing back to earth and showed just how quickly things can change in a short tournament. 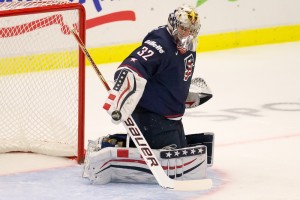 “In a short tournament, any little stick penalty, anything not sticking with the system will come back and bite you in the butt,” said Santini. “It’s really only a 7 game season so any turnover, any penalty can really hurt you.”

The Americans understand how easily their fortunes could have changed in Malmö. “A couple bounces here and there and you’re out of the tournament,” said Team USA captain Riley Barber. “Just a couple bounces and it may have been a different tournament.”

Stayed tuned here and follow me on Twitter to stay up to date. I’ll be on the ground in Malmö for the duration of the tournament providing all of the latest news and analysis.