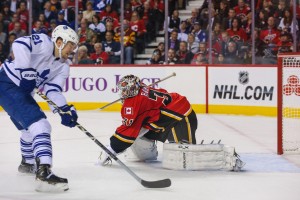 There were a few differences between the struggling Calgary Flames and the struggling Toronto Maple Leafs coming into Tuesday night’s game.
Although Calgary had just been severely beaten by the Ottawa Senators two days prior, the bottom-dwelling Flames were enjoying relative success. With no chance of making it to the post-season, the Flames were adjusting to the role of spoiler well, winning 6 of their last 10 games. The Maple Leafs, on the other hand, still had a chance to sneak into the playoff picture, and a western tour looked to help them achieve that goal. Unfortunately, it didn’t, and the Leafs instead ended up losing 8 games in a row. The losing streak cost them a lot of ground, and from then each game was a must-win if the team wanted to take over the wild card spot.
And although the Flames did not make it easy, the Leafs were able to pull out a win against them and keep their playoff hopes alive.
The Leafs held a slight edge in shots throughout the first period, yet neither team was able to get on the scoreboard.
It was Jay McClement who struck first, less than a minute into the second period. A no-goal decision waived off what would have been Curtis Glencross’ game-tying goal, but it was Matt Stajan’s wrister late in the period that finally evened up the scoreboard.
Luckily for the fans in the Air Canada Center, the home team started the final period dominant, and with two consecutive goals by Dave Bolland and David Clarkson, the Leafs found themselves two up on the Flames.
But with his sixth goal of the season, assisted by former Leaf Joe Colborne, Kris Russell made it a one-goal game, just under the halfway mark of the third.
A solid effort by goaltender Jonathan Bernier in the remaining minutes of the game staved off a loss, and the Flames fell to the Leafs 3-2 in regulation. 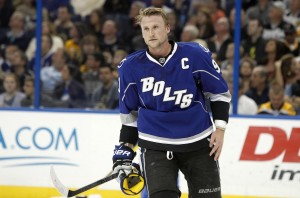 It is always a daunting situation to square off against a team that has on their roster one of the most dynamic players in the league. The Flames faced this situation in their game against Steven Stamkos and the Tampa Bay Lightning two days after their loss to the Leafs. But a strong game by the Flames and a 31-save performance by Karri Ramo (who was drafted by the Tampa Bay lightning in 2004) kept the Macedonian Assassin off the scoreboard completely, and it was the visiting team who claimed the victory in the end.
The Flames bombarded Ben Bishop in a matter of seconds, halfway through the first period. Capitalizing on a mistake by the Lightning goalie, Mike Cammalleri put the Flames up by one. 15 seconds later Kevin Westgarth doubled their lead with a wrister of his own.
Rookie Ondrej Palat, who is right up there with the likes of Nathan Mackinnon and Sean Monahan for Calder trophy consideration, scored his 20th goal of the season to cut the Flames lead in half with less than five minutes remaining in the second.
Not only was Ramo playing a solid game in net, but the Flames defense was on par, helping to keep the Bolts off the scoreboard. The Flames had a total of 24 blocked shots throughout the game, attesting to the grit and blue-collar work ethic that has become a redeeming quality of the struggling team.
But it was a costly tripping penalty to Eric Brewer late in the third that gave the Flames the opportunity to take their lead and run with it. Curtis Glencross beat Bishop on the ensuing man advantage, then added an empty-netter (his 12th of the season) to bring the final score to 4-1, Flames. 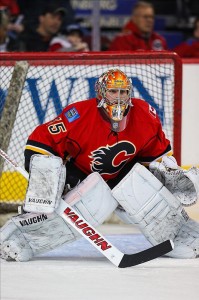 Poor Roberto Luongo. Not only did the former Canucks goalie have to endure eight seasons under the high-pressured scrutiny in Vancouver, and endless starting drama right up until he was traded back to the Florida Panthers, but he couldn’t even pull out a win on his 35th birthday.
Instead, it was 21-year old rookie Kenny Agostino who ended the night with a memorable celebration.
Agostino, who was acquired by the Flames in the Jarome Iginla trade, scored the first goal of the game, and his first career NHL goal, ripping a snap shot past Luongo just over a minute into the second period.
Shortly after, one of the Panthers rookies retaliated with a goal of his own to tie the game. On a Panthers powerplay, Vincent Trochek netted his fourth goal of the season, a wrister that came as a result of a rebound on Jimmy Hayes’ shot.
It was the only goal Joey MacDonald allowed that night, and it was his 34 saves that was the key difference maker in a close, low-scoring game.
Mike Cammalleri beat Luongo four minutes after Trochek’s tying goal, regaining the lead for the Flames.
Both goaltenders blanked their opponents for the remainder of the game, and the Flames edged out the Panthers 2-1.

The final week of the regular season has the Calgary Flames facing the New Jersey Devils, the L.A. Kings, the Winnipeg Jets and finally the Vancouver Canucks. With their season coming to an end, attention is now being turned to the highly-important topic of off-season moves made by the team, which has had a rather successful first year of an official rebuild.

Stay tuned for Week 25 of The Flames Files and follow the Calgary Flames’ progress in the 2013-2014 season.