Nearing the midpoint of the 2016-17 season, the Detroit Red Wings have taken fans on a ride full of ups and downs (more downs, if we’re being honest). For each player who has exceeded expectations this year, another has fallen short. Not limited to those on the ice, the effectiveness of some of the Red Wings’ brass has come into question too.

In this week’s edition of The Grind Line, the THW Red Wings writers discuss the players and personnel who have surprised them with their performances during the 2016-17 season.

Jimmy Howard, by far, has been the biggest surprise for the Red Wings. Starting the season as the clear No. 2 behind Petr Mrazek, Howard grabbed the reins of the No. 1 spot by posting a .943 five-on-five save percentage before suffering a groin injury Nov. 25 against New Jersey. During that time period, he also had a .940 save percentage in all situations, according to Corsica. The Red Wings, no doubt, were hoping to get a few quality games out of Howard for the entire season, with Mrazek primed to make his case for being the goalie of the future, but the 32-year-old has given them a quality outing in nearly every game he has started.

Of all NHL goalies who have played at least 500 minutes this season, Howard is sixth in the league in all-situations save percentage at .934, and is 10th in the league in five-on-five save percentage at .942. As you can see in this chart, provided by HockeyViz, Howard and Mrazek are performing about even at four-on-five, but Howard is outperforming Mrazek at five-on-five by a big margin.

Howard, however, hasn’t fared as well in his past two games, allowing four goals against Arizona and three goals against Los Angeles last week, but without him, the Red Wings would have a worse record than their current one of 14-14-4.

Howard’s main problem is he doesn’t get any goal support. Of all goalies who have played at least 500 minutes, Howard is last in goal support. The Red Wings have scored just 19 goals in the 16 games Howard has played in, which is an average of 1.19 goals per game. The next closest is Winnipeg’s Michael Hutchinson at 1.38. If the Red Wings figure out how to score on a consistent basis, Howard can no doubt improve on his 5-7-1 record.

Riley Sheahan has never blown away the fan base with his offensive capabilities. The 25-year-old center’s strength lies in his ability to play a 200-foot game and shut down the opposition. However, it is fair to say that fans expected more than the paltry offensive totals Sheahan has put up this season.

Through 32 games, he has yet to score a single goal, while collecting just six assists. While Blashill has used Sheahan in more of a grinding role of late, the defensive forward has skated on a line with just about every forward on the team. He has spent the most time skating with the pairs of Gustav Nyquist/Thomas Vanek (11.22%) and Henrik Zetterberg/Tomas Tatar (9.5%), according to Dobber Hockey.

In addition to playing with some of the team’s best forwards, Sheahan started the year as a regular on the Wings’ power play, averaging 2:15 PP TOI/GP through the first 10 games of the season. His inability to produce forced Blashill to alter his approach, and the 6-foot-3, 222-pound forward has averaged just 0:48 PP TOI/GP in the 22 games since.

In the first year of a two-year deal paying him $2.075 million per year, fans were hoping Sheahan would take a step forward this season. Instead, he is on pace to score 10 fewer points than the 25 he scored last season. 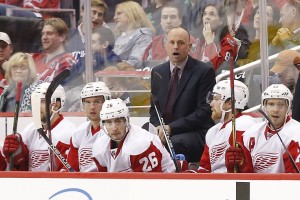 Though not a Red Wings player, Jeff Blashill’s performance has been most surprising this season in Hockeytown. Coming off of a rough first year, Blashill sought to improve the organization in Year 2 by bringing in John Torchetti and Doug Houda to assist him. But so far, Blashill’s lack of success has been surprising.

Through the first 32 games, there have been more than a handful of problems with the Red Wings—most of which remain unresolved. Mrazek—Detroit’s goalie of the future—lost his starting job, confidence, and the ability to see shots through traffic. Hockeytown’s 27th-ranked offense has struggled to score all season (save Saturday’s game vs. Anaheim), getting shut out four times to date. Actually sustaining offensive zone possession and getting shots on net has been a laborious task as well.

Those are just three issues the Red Wings have faced this season and none have really been addressed apart from the “we need to get better” postgame speeches. And before you blame the “poor roster” or tough-luck injuries for the team not putting forth a legitimate effort, it should be acknowledged that Detroit really does have a good lineup. They just haven’t produced. Everyone (except Howard) is just underperforming, and it’s Blashill’s job to get them prepared. He hasn’t done enough this year and it’s a surprise that there hasn’t been much blame thrown his way.

It’s a surprise that Blashill is not on the hot seat right now. And it’s also surprising that Blashill has not improved—the team or personally—in his second year with the Red Wings.