Quinton Howden (Click on name for up- to- date stats)

The promising power forward is an intriguing two-way player, featuring a great mix of size and speed, with his superb skating. 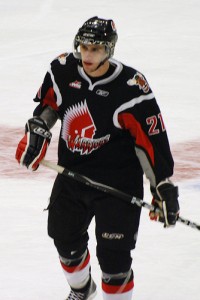 He had a great sophomore season in the “Dub” (WHL) averaging a PPG, which at 17 years old is not an easy task in this league. While Team Canada had an overall miserable WJC-U18s recently in Belarus, Howden actually excelled in the tournament in spite of the team’s 7th place finish.

Quinton’s upside is as a two-way top 6 forward with tremendous skating and offensive upside. He is a relatively safe pick because at worse he can contribute in a defensive role on the bottom two lines of an NHL squad. As Howden spends more time in the weight room, he should else be able to add a more prominent physical nature to his game.

“Howden has all the tools to be a successful pro yet does not always play with passion and intensity. He can be guilty of not moving his feet and can disappear for long periods of time. For his size, he should be more dominate down low but due to his unwillingness to pay the price it cripples this aspect of his game.”

McKeens 2010 Draft Preview
“His skating is so good for his size. His threat is his speed, not only to score goals, but to cause turnovers. He’s excellent on the penalty kill, always a threat out there. If he gets a step on anybody he’s gone.”

“An excellent skater with good size and a great shot. Has begun to really come into his own and become a great two-way player.”

“The 6’2” center was also a member of Team Orr at the 2010 Canadian Hockey League Top Prospects Game where he won the accuracy shooting competition – he went four-for-six in the first round and eventually beat out Devante Smith-Pelley (No. 76 ranked) and Steven Shipley (No. 43 ranked) in a showdown.”

“He was a member of the gold medal-winning Team Canada at the 2009 Ivan Hlinka Tournament and at the 2010 Under-18 World Championship he tied for the team lead in goals (4) finishing with six points in as many games.”

– At his best: A blend of Todd Bertuzzi, Patrick Marleau and Glenn Anderson

“Howden joined an organized hockey league at the age of seven just a year after he spent two months in a chest-to-toe cast that forced him to learn how to walk again. He broke his femur so badly in a bicycle accident that the doctor’s had doubts that he would be much of an athlete, let alone an elite hockey player.”