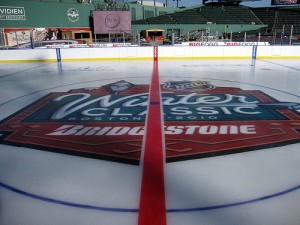 The Winter Classic is slowly becoming the Super Bowl of the NHL. Problem is, there are no trophies awarded and everyone knows who’s playing more than two weeks prior. But the hype is there, most importantly. We’ll see the same amount of commercials (so it seems) for the same repeated products or the spots for the same TV shows that the network is trying to push, but moreover, the same excitement, especially since hockey is making its mark yet again in America.

Living in Boston, it’s nice to see everyone wearing their Bruins gear and throwback Classic jerseys. This game, as important as it is to the NHL, is also pretty important to the B’s. What a lot of media outlets and fans are forgetting is that the game is still a, well, game. The win counts in the standings despite all of the glitz and glamour as much as any game played in the Garden this season. The Bruins are in the midst of a division race with the Buffalo Sabres leading and the Ottawa Senators close behind the B’s while the Flyers are attempting to inch into the playoff hunt.

With everyone who’s everyone actually being at the game, here’s a running diary of what those 38,112 in attendance at Fenway missed at home.

1:04 pm: Everyone, everywhere is talking about how great the conditions are at Fenway Park. Nice to hear, especially since the NHL was thinking about postponing the game to January 2. I would think playing the game in snow, rain, sleet, hail or any other turbulent weather might add more appeal and toughness. For the Bruins, Tim Thomas starts, for the Flyers, Michael Leighton.

1:07 pm: Really cool to see all of the Bruins retired numbers up at Fenway where the otherwise retired Red Sox players’ numbers would drape. NBC panned a closeup that still included Jackie Robinson’s 42 in the shot when Bob Costas was talking about Bruins’ greats and their numbers. Somewhere, PJ Stock is smiling

1:19 pm: There is a caveman cleaning the ice with a shovel right now. So easy a caveman to do it. In front of a Geico ad. Nothing like bringing hockey back to the pond. Of commercialism.

1:23 pm: I know that no one will ever replace Bobby Orr in Boston and that “the goal” will always be the definitive highlight of all-time for the B’s. But just once, how cool would it be for someone (from the Bruins) to have that impact on our generation?

1:28 pm: I still hate the Dropkick Murphys, but Bobby Clarke and Bobby Orr leading the Flyers and Bruins out to the ice is a great touch.

1:36 pm: Last pre-game update…having Daniel Powter (who?) and James Taylor (uh..?) sing the Canadian and American National Anthems instead of Rene Rancourt is a travesty. Let the world see Rene, I say. With Taylor, I felt like Chris Pronger and Zdeno Chara were going to start a stadium wide sway.

14:47, 1st: Both teams look sloppy early on. Perhaps both are still trying to get a feel for playing outdoors. Not too many shots on net either making me think that the first period is going to be a transitioning period for both teams. Emerick keeps pumping the stat that the winner of the Winter Classic goes on to play in the Stanley Cup finals. So, two. What he doesn’t say is the past two winners were the visiting teams, both of which lost in the Finals.

13:09, 1st: If I was Chara, I’m not, and I’m a Red Sox fan, I am, I too would wind up from the first base line to try to rip a puck off of the green monster. Would it be bad for Chara to show up another Boston captain on their home field as to who can get a ball over the monster and who can’t? Sorry, Varitek.

9:12, 1st: Claude Julien is an early pick for GQ’s Man of the Year with his choice of headwear. Last year’s Jack Adams winner is rocking Adams’ signature hat. Julien continues to be The Man.

7:59, 1st: Daniel Carcillo and his sorry excuse for a mustache takes down Shawn Thornton in the first fight ever in a Winter Classic game. He then acknowledges the crowd by raising his hands, NWO Wolfpack style. The next time he steps foot on the ice, he’ll get slammed. What a punk. Makes Sean Avery seem tolerable.

4:58, 1st: Very scrappy game so far. Any chance of a goodwill hockey game has gone out the window. Even though we’re at Fenway Park, there is NO resemblance to any type of grace or beauty that is a baseball game.

0:00, 1st: Some first period highlights include Johnny Boychuk’s hit on TK, Michael Leighton’s glove save on Byron Bitz and watching Curt Schilling in a vintage Bruins jersey talk about the 2004 World Series win. My Boston fanboy-ism is peaking.

20:00, 2nd: I don’t know if it’s been said yet, but I’m crazy about Thomas and Tuukka Rask’s masks. Rask’s was done by a local artist from Beverly, MA and is a nod to Boston sports complete with a bear ripping apart a Yankees jersey. Thomas’ pays tribute to Bruins legendary play-by-play man, Fred Cusick with the Winter Classic logo on the side. Very classy.

15:18, 2nd: Thomas’ head got the best of him on that goal. Instead of watching the net, Thomas went ahead to shove Philly pest Scott Hartnell leaving the net pretty open for Danny Syvret’s first career goal. I don’t know how many first goals can top that one. Big error on Thomas’ behalf, though. Hartnell is irritating and did skate into him prior to the goal, but no need to put your own defense in front of your team’s. 1-0, Philly.

9:51, 2nd: Chara draws the first penalty for the B’s and power play for the Flyers. Interested to see how this plays out since the Bruins look a step behind the Flyers but are still the team with the best penalty killing in the NHL.

6:00, 2nd: Chara almost gave the Flyers their second goal of the day, botching a between the legs pass to Aaron Asham rather than Dennis Wideman. That would have been two goals by Boston on Boston. Give Philly some credit for getting under the B’s skin throughout the entire game. This is a completely different team backed by their five-game winning streak coming into the Classic today. Michael Leighton looks like Martin Brodeur today–that or the Boston Bruins look like an AHL team. Either or.

0:00, 2nd: The Bruins need to figure out how to control the pressure in their own end and how to apply shots in the opposite end. Too many turnovers by the Bruins defense are leading to too many chances for the Flyers. Leighton looks great–poised and calm playing in a marquee game that he’s just not used to. The B’s are on the center stage now to prove to all doubters that they are for real and that their offense can come through in the clutch. But still, no goals for Boston.

3:20 pm: I’m not sure how many more Winter Olympic commercials I can take. NBC is really pushing this, huh? It’s not like nobody will watch…in fact, this might be a great way to turn viewers away. Remember the FrankTV and Lopez Tonight spots during the MLB postseason on TBS? How’s FrankTV doing nowadays? All we need now is a preempted showing of The Steve Harvey Show to make this complete.

15:15, 3rd: Carcillo to the box for hooking putting the B’s on the man advantage for the first time all game. Most important two minutes of the game? Yep, especially since the Bruins came out of the gate flying in the third period. Marco Sturm almost netted one shorthanded on one that squeaked under Leighton onto the post. Am I the only one who thinks Doc Emrick’s heightened vocal tones make for a more interesting game? For something as small as an offside, Emrick freaks out. The guy’s excited, at least. My girlfriend and the dog are sound asleep though, can’t be too exciting for them.

10:29, 3rd: I’m appalled at how many times Emrick and Eddie Olczyk have used the term “meat and potatoes” to describe the Thornton-Bitz and Vladimir Sobotka line. Not too sure how many times I would refer to them as such but I guess it works. I wonder who would be the potatoes? Maybe Sobotka?

10:15, 3rd: For the sounds of the game, both Carcillo and Mark Recchi are mic’d. Carcillo is talking about the game whereas Recchi is trying to figure out where the faceoff is, wishing the officials a Happy New Year, and telling everyone else to shoot the puck. Hmm.

8:54, 3rd: Let’s just have Olczyk mic’d for the entire game. In the last 30 seconds, Emrick told him he was a “musicologist” and had Olczyk admit that he’s only watched baseball once. “Just once,” Olcyzk echoed. The commentary is slowly becoming more interesting than the game. Never a good sign.

8:54, 3rd: Dennis Leary and a drunk Lenny Clarke are leading Fenway in Sweet Caroline. I’m not sure this works in a hockey setting. The Flyers fans have GOT to be confused right now and have GOT to be craving a cheesesteak.

4:30, 3rd: Please, please, please let’s not be the first team shutout in the Winter Classic. We cannot get a break. This power play is it for us. Do or die.

2:12, 3rd: RECCHI! Great puck progression and pressure on the power play on easily the best shift of the night for the Bruins. Nothing more inspiring then a game-tying goal late in the third. The Bruins are fired up, just need to wrap it up though. Emrick is running on all cylinders right now.

0:00, 3rd: Big delay of game call missed by the officials right there. No need to lay on the puck for 10 seconds when on the penalty kill. This game is making me hate the Flyers more and more. The Bruins will get the point but clinching the extra one will be even sweeter. Extra innings at Fenway plus an extra man on the ice for Boston. Of course that was going to be used tonight.

3:03, OT: Marco Sturm! What a tip-in! The Bruins! The Winter Classic! Boston! Couldn’t be happier for Sturm who has been one of the best Bruins skaters in the past month, scoring five goals in last six games. Really fantastic finish to an otherwise nail biting game for Boston. Was the Winter Classic a success? Sure. I think it kept audiences entertained and what a game it was. A come-from-behind victory by the home team–we’ll take it.

Plus, you know what they say about teams that win the Winter Classic…