When the Calgary Flames acquired Curtis Lazar from the Ottawa Senators at this year’s trade deadline, giving up a second-round pick in the process, it seemed like the former WHL standout was set to get a fresh start after struggling in his first couple of years with the Sens.

Yet, over two weeks have passed since the Flames brought Lazar to Calgary, and he’s still waiting to suit up for the first time.

Having joined a team in the middle of a franchise-best win streak, it’s understandable that Glen Gulutzan didn’t want to tinker with a lineup that was on a tear. Now that the streak is over, though, now might be the best time for the team to see what they have in the young forward as the regular season winds down.

In most seasons, acquiring an underachieving young player with a high ceiling wouldn’t leave a team feeling the pressure to see what they have in him right away.  However, with the looming expansion draft and a limited number of players each team can protect, every GM went into the deadline needing to seriously consider how any acquisition might affect their protected player list.

In Lazar’s case, it would be foolish for the Flames to have spent a high price for a young player only to see him leave in July. So, then, it seems fairly certain that the team will keep Lazar as one of its seven protected forwards heading into the expansion draft.

So if the Flames protect Ferland in the expansion draft, the last choice will be between Lazar and Brouwer.

Doing so will likely leave Troy Brouwer as the team’s highest-profile unprotected forward.  Although he’s struggled in his first year on a big new contract with the team, Lazar also struggled mightily in Ottawa this season. Should the team lose Brouwer to the Vegas Golden Knights so that the Flames can protect a player who’s yet to even play a game with the team, it might not go over too well for the team, especially if Brouwer were to go to Vegas and succeed.

So, with that in mind, it might be in the team’s best interest to give Lazar an extended run of games as the regular season winds down. That way, Gulutzan and Brad Treliving can get a closer look at how he might fit with the team beyond this season.

Up front, the Flames’ recent hot streak has been purely fuelled by the top six. Over the past 16 games, the team has gone 13-2-1, despite the third line of Brouwer, Sam Bennett and Kris Versteeg combining for just four goals over that span.

Even during the hot play of late, the Flames’ offense is in danger of falling off a cliff should an injury or cold streak begin to affect the team’s top two lines. Finding a way to boost the offense of that third line needs to be a top priority over the remaining 11 games, and Lazar might be the best option.

There’s no hiding the fact that Lazar’s numbers at the NHL level have been, well, unimpressive. Twelve goals in 176 career games is hardly inspiring from a player who tore up the WHL, was a standout with Team Canada at the World Junior Championships, and was even called “a power forward in the mold of a Milan Lucic” by Hockey’s Future.

That being said, Lazar is still a player with a tremendously high upside – likely higher than every player currently in the Flames’ bottom six not named Sam Bennett. While the management team may not like the idea of breaking up what has been a winning formula of late, there is still room for improvement on the team, and Lazar could potentially bring that to the third line.

Speaking of the third line, the consistent struggles from Bennett to find the offensive production expected of him are an increasing concern.

The calls to move him from center to the wing are increasing by the day, but the issue has always been that there have been no real replacements available at third-line center. Plain and simply, Matt Stajan is no longer a top-nine player, and neither is Freddie Hamilton.

CLazar, however, is capable of playing either center or wing, and might add the needed spark to that line centering Bennett and one of Brouwer or Versteeg.

The potential of moving Brouwer to the fourth line – or even out of the lineup for a period – might not sit well with a front office that has just given him a long-term deal, but if it helps create a third line capable of putting the puck in the net, it will be more than worth it.

Ultimately, the Flames paid a significant price for Lazar and would be wise to see where the young forward fits best before the playoffs get here.

While starting him on the struggling third line might not be in Gulutzan’s interests, at the very least he needs to get some time in on the fourth line. It’s true that the Flames have been playing some great hockey of late, but you’re not going to see that disappear just because Lazar checks in for a player like Alex Chiasson or Lance Bouwma. 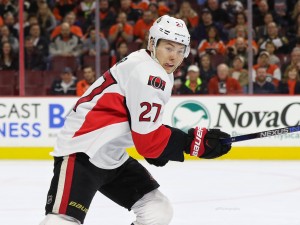 The Flames are improving and certainly aren’t going to be a team that others hope to face in the playoffs, but they are hardly a complete team yet. There are holes on the roster and areas where the team is still struggling.

Depth in the postseason is critical. Should the injuries that the team has managed to avoid for the bulk of the season begin to pile up, you don’t want to be throwing Lazar into the fire untested.  Getting him into the lineup will either see the bottom six take a step forward, or at the very least give the coaches a better idea of what to expect from a new depth player.

The time is now for the Flames to see what they have in Curtis Lazar.