TML Captains is a series that profiles the men who ‘wore the C’ for one of the NHL’s charter franchises. Previously featured were Charlie Conacher, Red Horner, Syl Apps and Bob Davidson. All profiles can be found here. 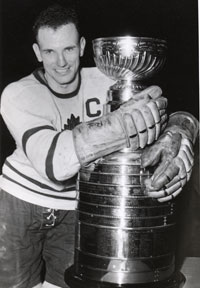 Born Theodore Samuel Kennedy in Humberstone, Ontario, the man who’d be known as ‘Teeder’ started life with a strike against him. Ted’s father Gordon was killed in a hunting accident 11 days prior to Ted’s birth, leaving a widow with four children. As fate had it, Margaret Kennedy would take a second job at the confectionery stand at the local arena to support her family. Young Ted became a rink rat, and his teammates, who had trouble pronouncing ‘Theodore’ shortened his name to ‘Teeder’. He was lucky to attend the first two games of the 1932 Stanley Cup finals at Maple Leaf Gardens, where he was so impressed by Charlie Conacher, he began wearing the Big Bomber’s #9 throughout his minor career. Kennedy would never grow to the same physical stature as Conacher, but he emulated the winger in two ways… Kennedy was a poor skater, and like Conacher, he worked very hard to develop other parts of his game to be a better player.

Teeder played a lot of hockey in his hometown of Port Colborne, and by age 15, newspapers were reporting his exploits. The Montreal Canadiens took notice, and sent scouts to sign the star winger. They offered to cover his living expenses and schooling to move to Montreal to continue as a junior. Yet the story goes that Kennedy was not met by anyone from the Canadiens when he arrived by train. Mostly left to his own devices, and he soon grew homesick, and told the Canadiens he was returning to Port Colborne. Now 16, Teeder joined the Port Colborne Sailors senior team, coached by former NHL career scoring leader Nels Stewart. In his one season, he learned as much as he could from the former Hart Trophy winner, including a terrific prowess on face-offs. It became one of Teeder’s most notable skills, and an important part of his pro career. He also scored 23 goals and 52 points in 23 games. Montreal attempted to bring Kennedy back, but Stewart tipped Frank Selke of the Maple Leafs that there was a kid he should look into. When the Leafs came calling, Kennedy was more than happy to take another shot at the NHL.

“Toronto was our team and the Maple Leaf players like Conacher, Primeau, Jackson, Clancy, and Hap Day were our heroes. It wasn’t a bluff for more money, I simply had no intention of going to Montreal. It was a boyhood dream to play for Toronto.“

That dream was realized quickly. Selke was in charge of the Leafs while Conn Smythe was in Europe during World War II, and Selke swung a deal that brought Kennedy in exchange for Frank Eddolls. Michael Farber called it one of the five darkest days in Habs’ history. Still, Smythe was furious the deal had been made without his knowledge, leading to a rift that would see Selke leave Toronto to build a powerhouse, ironically in Montreal.

For his part, Ted Kennedy proved a steal – and Smythe eventually came to admire him, calling him the “greatest competitor in hockey.” He played just 2 games in the 1942-43 season, but would end up playing parts of 14 seasons for the Leafs, 5 times scoring 20 or more goals and 50 or more points. In his first full season, he produced 49 points in 49 games. He followed that up with 54 points in 1944-45 to emerge at age 19. He was an important piece of the Leafs’ puzzle, as he could score, make plays, and was becoming one of the better checking forwards in the league. In the playoffs that year, Kennedy also gained a reputation for turning in clutch performances.

The Leafs upset the Canadiens and then defeated the Red Wings in 7 games that spring. Kennedy, who had led the team in regular season scoring, was the overall playoff goal scoring leader with 7 in 13 games. Teeder was becoming a leader, along with Bob Davidson (serving as captain while Syl Apps was at war) and Frank McCool (stellar in net for Turk Broda who was also at war) as the Leafs regained the Stanley Cup in 1945. By 1946-47, Kennedy was an established young veteran, playing on ‘the Kid Line II’ with Howie Meeker and Vic Lynn. Teeder led the Leafs with 60 points in 60 games, and added 9 more playoff points (including the winning goal) as the Leafs won the Cup again. The following season, Teeder was the playoffs’ leading scorer and the Leafs won another Cup. Following that win, Apps retired and Kennedy was immediately named the new captain at age 22.

“To share that honour with Syl Apps, a superb player and perfect gentleman, was a great moment,” Kennedy said. “When I replaced him as captain in ’48, it was the proudest moment of my life.” 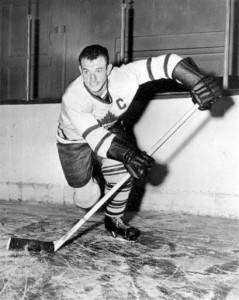 The 1948-49 Leafs were comprised of many players similar in age to Teeder; Meeker, Lynn, Bill Barilko, Gus Mortson, Tod Sloan, Sid Smith and Jim Thomson. Kennedy was undoubtedly the leader, now very much known for his tenacious work ethic and ability to come up big when it mattered. Still coached by Hap Day, Kennedy and the young Leafs won the Cup yet again in the spring of 1949. The Maple Leafs became the first team to win three consecutive Stanley Cups. Kennedy in fact had now won four Cups in only 7 seasons.

Could the Leafs have won another Cup in 1950? Some, including Kennedy, maintained it was possible. But in game 1 of the playoffs against the Red Wings, a play occurred than changed the series. Gordie Howe attempted a check on Kennedy who was carrying the puck. The result of the play was Howe having emergency surgery to relieve pressure on his brain after he’d fallen face-first into the boards. Kennedy and the Leafs claimed Howe missed the check and fell off-balance as a result, while Jack Adams and the Red Wings were convinced Kennedy had tripped or butt-ended Howe, causing him to fall and be injured. There was no penalty or suspension to Kennedy. The issue has never been resolved (as there’s no photographic or video evidence), but the Red Wings, whom the Leafs had handled easily in the past, were determined to win it for young Howe, and eliminated the Leafs in 7 games.

In 1950-51, with Joe Primeau now coaching, Kennedy captained yet another champion to capture his 5th and final Stanley Cup. It was the team’s 4th in 5 seasons, and capped a run of 6 Cups in 10 seasons for Toronto. But, inevitably, the Leafs began to decline and the Canadiens and Red Wings ascended to be the league’s best. Teeder continued to play well, including a 52 point effort in 1951-52 that landed him 9th in NHL scoring (the 4th time he was in the top-10). In 1953, feeling that Kennedy was being overlooked by the league in terms of awards (he had been named a Second Team All-Star twice to that point), Smythe created the J.P. Bickell Award and gave it to Kennedy to recognize him as having made an outstanding contribution to the Leafs (he would win it again in 1955).

But, in 1954-55, the NHL did award what some saw as a controversial Hart Trophy to Teeder. Certainly, the Hart Memorial Trophy, recognizing the MVP, is no stranger to controversy. The debate centres around what the award is for… the MVP as in the best player in the league, or the player adjudged most valuable to his team? Teeder had never really been among the greatest players in the league in terms of his numbers, but without doubt he was instrumental to the Leafs during those Cup-winning years. In 1954-55 his 52 points were good for 2nd on the Leafs, but well off the league leader totals. The general view is now that the Hart win that season was an attempt by the league to honour Kennedy; his performances in the past may well have warranted MVP consideration, and the league found a way to recognize him, even though truly he probably didn’t deserve to win the Hart that season.

Kennedy retired following the 1954-55 season, saying while he loved the game, his “legs were through with it”. He was wooed back to the Leafs during the 1956-57 season by his old linemate Meeker, now coach of the Leafs. He played 30 games, scoring 6 goals and 22 points at age 31, but that was the end of his career. “The team missed the playoffs and I sat out the last two games of the season so they could take a look at a kid named Frank Mahovlich,” Kennedy said. “It was time for a new generation to lead the team.”

Following his second retirement from the Leafs, Kennedy coached the Peterborough Petes for a season, and reportedly turned down an offer to coach the Maple Leafs just before Punch Imlach was hired. That may be the case, though some speculate that while Smythe loved Kennedy, he harboured a grudge against his captain for the fact that he’d kept information about Ted Lindsay’s plans to unionize the players away from management. He returned to Port Colborne and continued his interest in breeding thoroughbreds, something he had long done even while playing in the NHL. Meeker was quoted as saying “He knew the stud lines of any horse in North America. He loved the horses almost as much as he loved hockey.” Kennedy also served as a steward of the Ontario Racing Commission from 1977 until 1985.

Upon Kennedy’s passing in 2009, Canadiens’ legend Jean Beliveau said “I was certainly happy to play against him and I’m so sorry to hear (of his death). He was a complete centreman, a good playmaker, a good passer, good on faceoffs.”

Teeder Kennedy remains in the top-10 all-time lists for goals, assists and points for the Maple Leaf franchise. He also continues to be the Leafs all-time leading point-getter in Stanley Cup finals series. He was inducted into the Hockey Hall of Fame in 1966, though like his Hart Trophy, there was some feeling that his accomplishments did not quite add up to a Hall of Fame placement. In recent years however, there has been something of a renewed appreciation for Teeder. In 1998, The Hockey News ranked Kennedy 57th in its publication The Top 100 NHL Players of All-Time, and a Sports Illustrated poll of experts ranked Kennedy as the all-time best face-off man.

Inducted to Hockey Hall of Fame in the Player Category, 1966

Information for this article was complied from sources including torontosun.com, thestar.com, http://www.legendsofhockey.net and http://www.hockey-reference.com.