The New York Rangers might have hit a jackpot when they signed Jimmy Vesey to an entry-level contract over the summer. The 23-year-old American left-winger has swiftly navigated his way to what looks like a promising career in the NHL.

Who would have known the third-round pick selected at No. 66 in the 2012 Draft would be ranking second for most goals per shot on goal out of all rookies debuting the NHL this season? For every five shots on goal, Vesey scores a goal and the only other rookie with a better rate than that is Patrik Laine of the Winnipeg Jets (who scores a goal every 4.9 shots on goal).

Although Vesey’s point per game played (P/GP) is only 0.59, he’s proven himself to be an efficient goal scorer, more so than Matthew Tkachuk, Mitch Marner, Auston Matthews and the popular Zach Werenski. This isn’t the only thing that makes Vesey so interesting, though.

Also of interest is the path he took to get to where he is today. At the age of 19, he embarked on the NCAA route to the NHL, attending Harvard University majoring in government studies. After finishing the 2015-16 NCAA season with the Hobey Baker Award for Top Collegiate Player and the NCAA (ECAC) Player of the Year Award, the highly touted Predators prospects hit free agency last summer when he decided against signing with Nashville. His draft rights expired on Aug. 15, 2016, and five days later, were acquired by the Buffalo Sabres in a trade for a 2016 third-round pick, which ended up being Rem Potluck (No. 76) from the USHL.

Dissatisfied with negotiations in Buffalo, Vesey continued to explore his options with seven other teams. For a guy whose never played an NHL game before, having so many options was a rarity. The demand for his services was at an all-time high due to the nature of his contract. It was what many in the industry considered to be a low-risk signing with a decent possibility for potential.

Over the last month, Vesey has been experiencing some changes in his development. In recent articles, I’ve discussed the use of advanced stats to evaluate the progress of rookies in the NHL with an emphasis placed on the way ice time affects them specifically. For example, I’ve learned that the 25 rookies debuting in the NHL this season with at least 15 NHL games played have an average TOI of 15:10.

I also learned Matthew Tkachuk of the Calgary Flames is not affected by shift length, but that may be because he plays fewer minutes per game than the average rookie does. I also learned that Zach Werenski of the Columbus Blue Jackets is most effective when playing lots of minutes and that Mitch Marner of the Toronto Maple Leafs is most effective when playing less than 18:00 each game and with shorter shifts.

When it comes to Vesey, though, who plays an average of 14:37 per game, the key lies within his shift length.

In my first analysis of Vesey’s stats, I compared his time on ice (TOI), the number of shifts and average shift length in a bar/line graph.

As you can see in the graph above, Vesey’s shift length tends to increase in games the Rangers end up losing and the majority of his goals are scored when his shift length dips in the opposite direction. This is a similar trend found with Marner. You’ll also notice Vesey’s missed shots and attempted shots blocked are steadily decreasing, while his shots on goal remain relatively consistent.

In my second analysis of Vesey’s stats, I’ve taken a closer look at his on-ice events and compared them with October and November. In November, Vesey’s game has changed in the following ways:

Usually, rookies are more effective when given less TOI in a game. However, these types of rookies are often overplayed in games lost, even though it’s counterintuitive. With Vesey, as his ice time increases, so are his shift lengths. Although it’s clear that increased ice time doesn’t infringe on Vesey’s performance, there’s evidence that long shift lengths do.

In my third analysis of Vesey’s stats, I’ve taken a closer look at his ice time and shift lengths and how his on-ice events relate to TOI. 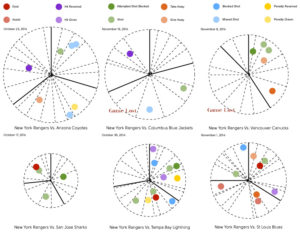 In the pie graphs above, we have Vesey’s on-ice events charted from six different games. The size of each pie represents the minutes Vesey played that game in comparison to each other. The bolded “slices” of each pie represents the first, second and third periods and their size reflects the TOI Vesey played that period. Within each bolded slice are smaller slices which represent Vesey’s shifts that period and their size reflects the shift’s length. The dots inside each pie graph represents an event by Vesey and their color indicates the event type.

The three games in the top row are the games Vesey had the most TOI, while the three games on the bottom are games he had the least. As you can see, Vesey incurred more events when given shorter shifts. Although there are only six games here to compare and six isn’t a large enough sample to make any concrete conclusions from, it would appear that fewer minutes played results in more events incurred. However, in his Oct. 17 game against the San Jose Sharks, he had the least amount of ice time to date and was only able to harness two shots on goal. If Vesey wasn’t such an efficient goal scorer, he likely wouldn’t have scored a goal that game.

Furthermore, Vesey has improved since starting the season. As mentioned previously, he’s decreased his missed and attempted shots blocked. In the graphs above, you’ll notice that in the three bottom row games, he had no missed shots even though it wasn’t until November when his missed shots per minute played started decreasing so rapidly.

He’s also getting more shots on goal which means Head Coach Alain Vigneault is likely giving him greater offensive responsibility in this area and that makes sense because of his scoring reputation. However, if increased shift length is hindering his effectiveness, including his ability to score goals, it would explain why his goals per shot on goal has decreased so drastically. In November, Vesey’s G/SOG decreased to one goal scored for every 9.5 shots on goal, from one every 2.6 shots on goal in October. Yes, Vesey’s assists per minute played have increased by 67.16 percent in November and his hits, blocked shots and takeaways have increased by 29.31 percent.

It’s clear a steady increase in ice time is giving Vesey the opportunity he needs to work through the vulnerabilities of his game. However, further analysis regarding the impact shift length is taking on him may reveal a more efficient development regime. As a third-round pick who looks more like a high first-round pick, he’s a smart guy who chose to be coached under Vigneault for a reason.

Vesey does what most players don’t and exceeds all expectations. He’s impressively managed his career this far and will continue to do so in the years to come. In 20 years from now when Vesey’s 43, it’ll be interesting to see where he is in the NHL and the impact he’ll certainly be having in some sort of management position.