After looking at forwards, we continue our look at European-born NHL talent by way of the goal crease. Although the pool isn’t as deep as with the forwards, we’ll take a look at the top five goaltenders to come from across the pond. 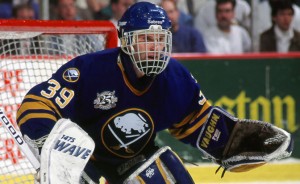 This one is a no brainer. Not only is Dominik Hasek one of the best European-born goalies of all-time, he’s one of the best hockey players. Period. Dominik Hasek was the backbone of the Buffalo Sabres franchise for a decade, winning six Vezina Trophies and two Hart Memorial Trophies (becoming the first goal to win the award multiple times.

Although we’re looking at NHL accomplishments, we’d be remise not to mention his 1998 gold-medal run playing for the underdog Czech Republic, further cementing his legendary status. After falling short in Buffalo, Hasek finally captured his elusive Stanley Cup in 2002 with the Detroit Red Wings, becoming the first European-trained goaltender to do so.

Among Hasek’s many accolades, he is the all-time leader in save percentage (.922), first goalie since 1974 to finish the season with a GAA under 2.00 and holds the record for the most shutouts in a month, recording six of them during December 1997.

As what some may consider the wildcard of the list, Pelle Lindbergh makes this list for being a pioneer and paving the way in the crease for the many European goalies that would follow him.

Following the 1985 season, Lindbergh became the first European-born goaltender to win the Vezina Trophy. Unfortunately, his promising career was cut short at the age of 25 after fatally injuring himself when he lost control of his car the following offseason.

Lindbergh played in parts of five NHL season and was selected to the 1983 All-Rookie Team and 1985 NHL First All-Star Team.

Joining his fellow Swede and only current player to crack the list is none other than King Henrik. Henrik Lundqvist has established himself as on of the best goaltenders of his era. He’s a model of consistency at a position that’s seen a lot of turnover over the last decade.

Surprisingly, Lundqvist only captured one Vezina Trophy, in 2012 and hasn’t yet captured hockey’s ultimate prize. However, he has a number of achievements, despite his career being far from finished.

He’s the only goaltender in NHL history to record at least 30 wins in each of his first seven seasons, holds the record with six consecutive Game 7 wins and is already 19th in all-time wins (339) and is on track to eclipse Hasek’s European record of 389 career wins within the next two seasons.

Lundqvist also holds a number of Rangers records including, most wins, most shutouts, most playoff wins and most shutouts at Madison Square Garden.

Today, there are an influx of quality Finnish goaltenders in the NHL today. Miikka Kiprusoff was the catalyst of this trend as he was one of the better goalies in the 2000s.

Kiprusoff was awarded the Vezina Trophy for his work during the 2005-06 season, earning 42 wins, a 2.07 GAA and a save percentage of .923. Prior to that he and his Calgary Flames were one goal away from capturing the Stanley Cup in 2004. He played a key role in the Flames Stanley Cup run, posting a 1.85 GAA and a .928 save percentage.

Kiprusoff would capture 319 wins before retiring after the 2012-13 season.

Because Vladislav Tretiak never played in the NHL, Nikolai Khabibulin is the only member of Russia/USSR to crack the list. Helping The Bulin Wall make this list, is the fact that he’s one of only three European goalies to win the Stanley Cup (Antti Niemi being the third to do so in 2010).

During the Tampa Bay Lightning’s 2004 Stanley Cup run, Khabibulin recorded five shutous, three of which came in the first round against the New York islanders (tying a NHL record). Some could argue this wasn’t even his best postseason performance as he recorded a league-best .932 save percentage during the 1997 playoffs.

Khabibulin can also claim having the lowest GAA through the first nine games of an NHL season. Playing for the Edmonton Oilers in 2011, he posted a 0.98 GAA to start the season.