Every year, as we head toward the NHL trade deadline, the debate begins over whether teams might be “buyers” or “sellers.”  Yet, as the league sees more and more parity every year, the group of teams stuck somewhere in between continues to grow. At the moment, only two teams in the league (the Arizona Coyotes and Colorado Avalanche) are more than seven points out of a playoff spot, so most still consider themselves to be in the race.

Many of the teams who are five or six points out would be wise to position themselves as sellers come March 1, but the real question comes with teams sitting in the type of position the Calgary Flames find themselves in. Right on the cusp of the postseason, should the Flames look to add at the deadline, sell off and pick up some futures, or stand pat and see where the rest of the season takes them?

While making the playoffs is a very realistic possibility for Calgary this year, you won’t be seeing much money bet on the team to still be around in June. Mortgaging future assets to try to win now is likely foolish, but there are a few names out there that could help the team for years to come and may be worth paying the price for:

As mentioned in an earlier article outlining the possible replacements for Dennis Wideman, Brendan Smith is a big, mobile defenseman who is capable of playing either the left or right side. His flexibility, price tag, and impending UFA status this summer make him a potentially cheap and useful addition to the Flames’ top four.

While somewhat maligned with the Detroit Red Wings, Smith has continued to post positive underlying numbers, with an ability to both move the puck and play well physically. With cap issues straining Detroit’s back end, Smith is likely set to walk this summer once his $2.75 million contract expires.

As a prime “buy-low” candidate for the Flames, Smith could be the missing link to Calgary’s defense corps.

Also earmarked as a potential Dennis Wideman replacement, Cody Franson is certainly a bigger name than Smith, although he is a couple of years older and will not come as cheaply – in salary or in trade value.

It is also worth noting that the defenseman just sustained a foot injury that will sideline him until around the trade deadline.

With a $3.75 million contract set to expire this year, Franson will be looking for the long-term deal he’s been chasing for some time. Prior to signing his two-year deal with Buffalo, Franson played out three consecutive one-year deals with the Toronto Maple Leafs.

Having been linked to Franson in the past, acquiring him at the deadline would likely make signing the blueliner to a long-term deal fairly manageable.

With a center corps boasting Sean Monahan, Mikael Backlund, Sam Bennett and Matt Stajan, on paper the Flames are set down the middle. But with Bennett’s up-and-down season and continued offensive struggles such a young age, it might help to move him to the wing and bring in some offensive help down the middle.

While often criticized by the rabid Montreal media, David Desharnais is a viable top-nine NHL center who consistently produces.  Over the past 6 seasons, his 0.59 points per game rank him ahead of centers such as Mikael Backlund, Rickard Rakell, Mika Zibanejad, Adam Henrique and prized trade deadline target Martin Hanzal.

At a $3.5 million price tag that expires this summer, Desharnais is the type of player that could fill a similar role with Calgary to Valtteri Filppula’s with the Tampa Bay Lightning, and the emergence of Phillip Danault while Desharnais missed time with a knee injury made the Montreal Canadiens’ center expendable and put him squarely on the trade block.

At 35 years old, Radim Vrbata is hardly a young piece the Flames could build around for the future. That being said, he could instantly solve the team’s hole on right side, where there is a serious lack of offensive talent and depth. 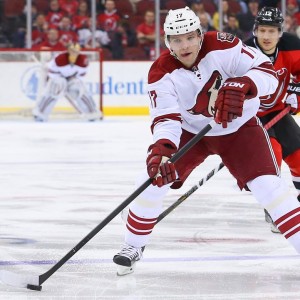 Beyond Michael Frolik, the Flames are left with Troy Brouwer, Alex Chiasson, and a rotating door of fringe players at right wing. With 11 goals and 35 points on the year for a bad Coyotes team, Vrbata would step in immediately and help the Flames in their playoff push, and at a cheap price.

This move clearly wouldn’t be looking to the future, but at the price, it just might be worth it for a season or two. At 35 years old, Vrbata continues to produce offensively year in and year out.

The Calgary Flames certainly aren’t going to be pushing their chips all-in this year, so blockbuster rentals or future-mortgaging mega-deals aren’t things that fans should be looking forward to. However, there are players on the trade block who could fit very nicely with the Flames this year and beyond at a very low price tag.

Be it a player like Smith or Franson to fill the hole on the back end, or someone like Desharnais or Vrbata to help address the scoring up front, there are ways to improve the team quickly and cheaply. The question is, how actively will general manager Brad Treliving be hitting the phones over the next couple of weeks?