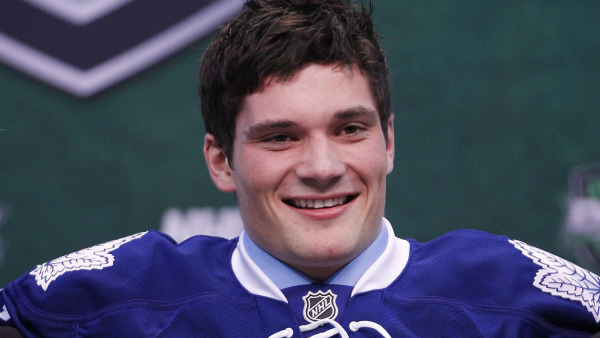 The term “Brian Burke type player” gets thrown around quite a bit in the blogosphere. Tyler Biggs, drafted 22nd overall by the Toronto Maple Leafs this past NHL draft fits perfectly into that category.

Truculence, belligerence, testosterone, high character. Every term Burke uses to describe one of the players that plays his style of game fits under the traits of Biggs. The 18 year old power forward is as competitive of a hockey player as you can get.

He possess the winning demeanor that could pay its dues with the Maple Leafs in the future considering the fact that the club has not won a Stanley Cup since 1967 and failed to make the playoffs in the last seven years.

Biggs holds three gold medals on his resume. He won two in the IIHF Under 18 World Championships in 2010 and 2011 and won another gold in the Under-17 World Hockey Challenge.

In the 2010 Under-18 championships, Biggs was rendered pointless while in the 2011 tournament, he netted two goals and added an assist.

Tyler is a big power forward that understands his limitations. He throws around his weight with bone crushing hits and knows how to protect the puck with his body which makes him a force along the boards and in front of the net. He is on his game when you see him driving to the net hard and busting through defenseman. On top of that, Biggs yields a powerful shot similar to Bobby Ryan’s off the wing.

Biggs has trouble handling the puck in the north/south game as his ability to protect the puck with his body is rendered useless. He is a power forward on the wing and plays well when he plays with talented line mates. Therefore, he has trouble creating offense individually. He also needs some improvement on his skating, acceleration bursts especially.

Tyler Biggs has the potential to slot in as a top six forward for the Maple Leafs organization in the future, likely on the second line. The Leafs lack a true top six power forward and Biggs could be the candidate to fill a spot. Biggs can also be a very useful player in a checking role on the third line which is a spot most scouts believe he will end up playing in.

Tyler is committed to playing hockey for the Miami Redhawks of the NCAA which likely means Leafs fans will not be able to salivate over him for another four years.

Other Articles Around the Net:

Being a Leaf makes Tyler Biggs Sick to his Stomack

A couple of interviews from Maple Leafs prospect camp can be found within the following link of Tyler Biggs talking to the media:

Here is a montage of clips of Biggs with the U.S. National Development Team: