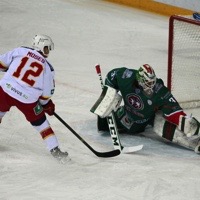 The Edmonton Oilers have acquired the rights to RFA goaltender Anders Nilsson from the Chicago Blackhawks for forward Liam Coughlin.

Coughlin, 20, was a 2014 fifth-round selection (130th overall) by the Oilers last summer who has committed to the NCAA and University of Vermont for the foreseeable future. The 6′ 3” 185 pound center finished the year with the BCHL Vernon Vipers and had a 20 goal 60 point season.

In the grand scheme of things Coughlin won’t be coming to Edmonton for a few years as it is and with the Oilers looking to continue the theme this offseason of improving the team in the immediate rather than the future, Coughlin became expendable. He was a fringe prospect at best and even if the does pan out, the Oilers wouldn’t see him for another few seasons as it was.

GM Peter Chiarelli understands one of the biggest albatrosses of the organization is the goaltending which hasn’t been stabilized in almost a decade. This is where a flyer on Anders Nilsson comes in.

Who Is Anders Nilsson?

In Nilsson the Oilers acquire a former 2009 third-round selection (62nd overall) by the New York Islanders.

After two years in Sweden and three years developing in the system with the AHL Bridgeport Sound Tigers, he chose a starting opportunity in the KHL over a fourth year of development in the minors with the Islanders. He got thrown into the deal that sent Nick Leddy to the Islanders and ended up as a prospect the Chicago Blackhawks could keep tabs on without having to issue a contract. The goaltending situation forced any and all opportunity for a backup spot out of the realm of possibility and thus the deal.

The numbers on the Anders Nilsson who the Oilers traded for today. Was outstanding in the KHL last season. http://t.co/lOx76AecFC

Now 25 years old, the 6′ 5″ 235 pound Swedish goaltender offers the Oilers an opportunity to improve their goaltending depth and put him in direct competition with current backup and former starter Ben Scrivens. Chiarelli and the Oilers haven’t wasted anytime having already signed him to a one-year $1M deal. This could net the Oilers a low-risk, high-reward flyer of has the potential to be either a steal of a deal or just a footnote on the 2015-16 season.

As per Oilers release Anders Nilsson has already agreed to terms on a 1-year deal with the Oilers — Bob Stauffer (@Bob_Stauffer) July 7, 2015

There could be another shoe to fall still as this could potentially mean the Oilers have Scrivens heading out with Nilsson potentially being granted a backup spot, it could also mean that Nilsson is going to get a low-risk deal to compete for the job and if he should fail to claim the job out of camp (if no Scrivens deal happens), he ends up going to the AHL to split the duties with Laurent Brossoit and Eetu Laurikainen.

Nilsson was average at Worlds. I see this as a competition signing, not a guaranteed spot on #Oilers roster. Scrivens can’t be bought out.

Make no mistake about it Nilsson wants an NHL job, so if he ends up balking at an AHL assignment, Chiarelli and the Oilers would’ve given up a fringe prospect in exchange for a professional tryout opportunity.

How Does This Affect The Oilers Goaltending Depth Chart?

At the moment the Oilers boast eight goaltenders in the system after letting Viktor Fasth walk via free agency and not extending qualifying offers to former prospects Tyler Bunz and Frans Tuohimaa:

Prospect wise Brossoit and Laurikainen will likely be the tandem for the AHL affiliate next season. Brossoit, 22, currently possesses the most potential to be an NHL goaltender in the Oilers prospect base. The rest are relatively unknown at this point what they will pan into, if anything. The Oilers prospect base struggled last season in goal for their respective clubs. Bouchard will play another year of junior with the QMJHL Baie-Comeau Drakkar after having some struggling numbers and losing the starting job last season with the Val-d’Or Foreurs. Nagelvoort will look to bounce back after a rough year in the NCAA with the University of Michigan. Svoboda after being drafted 208th overall in the seventh round this summer looks to improve upon a decent season with AZ Havirov in the Czech 2 league. Really this impacts one guy, Scrivens.

The two are now in direct competition for an NHL job next season.

Ben Scrivens is not a bad person (not even close) and not necessarily a bad goalie. He just had one of the worse seasons ever.

Is is possible the Oilers have already soured on Scrivens after two seasons in Edmonton?