Prior to the 2008-2009 campaign, the Ottawa Senators were in the midst of an eleven-year postseason streak that saw them finish as the top team in the Eastern Conference twice. However, the club failed to win a the Stanley Cup in that span, which frustrated both the team and its fanbase. Ottawa had not raised the Cup since 1927.

The Senators would not fair any better the next season. The team struggled throughout a good portion of the year and missed the playoffs for the first time since 1996. Frustrations continued to mount in Canada’s capital, and they began to take their toll on one of the franchise’s best players.

Forward Dany Heatley posted 72 points for the Senators that year–his worst production since his rookie season in 2001-2002. While those are still impressive numbers, Heatley was unhappy with the new role he obtained under head coach, Cory Clouston. The all-star was demoted to the second power play unit and his overall ice-time was reduced by nearly 90 seconds per game. Just one year after signing a six-year, $7.1 million contract extension, the former 50-goal scorer asked to be traded from the team that made his career. 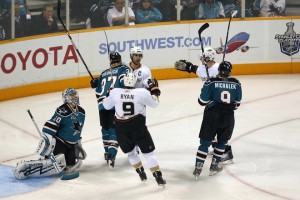 The San Jose Sharks organization was suffering from an equally devastating, though very different, situation after the 2009 playoffs. The team had just finished their best regular season in franchise history and captured the President’s Trophy for being the best team in the league in the process. That year seemed to be the year of the Shark. But in typical San Jose fashion, the team was eliminated by the Anaheim Ducks in the opening round of the playoffs. It was set to be a long and agonizing offseason for San Jose.

Just before the start of the next season, the Ottawa Senators found a team willing to take on Dany Heatley and his expensive contract. That team was none other than the down-but-determined San Jose Sharks franchise that recorded 117 points the previous year. On September 12, 2009, the Senators traded Dany Heatley and a 2010 fifth-round pick to the Sharks in exchange for Milan Michalek, Jonathan Cheechoo, and a 2010 second-round selection.

Dany Heatley performed acceptably well in San Jose and earned a 146 points in 162 games. This means that he averaged 0.9 points per game, which is similar to what Al Macinnis, Jeremy Roenick, and the late Pavol Demitra registered over their careers. He also maintained a middle-of-the-road corsi of 50.5% despise starting just 45.3% of his shifts in the offensive zone.

In 2010, Heatley played for Team Canada in the Vancouver Olympics, where he won a gold medal and became the all-time leading point scorer in Canadian hockey Olympic history.

After battling multiple injuries throughout the regular season and the playoffs, No. 15 played his least productive season of his career in 2010-2011. Because of this struggle, the Sharks traded Heatley to the Minnesota Wild for Martin Havlat, who will forever be remembered by Sharks fans for this infamous incident:

Injuries like these were the story to Havlat’s tenure in San Jose. In the three seasons he played with the team, he only appeared in 127 regular season contests. For comparison purposes, the Sharks played 246 games over that span. Even though he only played 51% of the total games possible, Havlat still registered 67 points and a plus-31 rating. However, the injuries were all too common and his production was not what the team was expecting. He was bought out of his contract in June of 2014.

The 2010 fifth-round pick San Jose acquired from the original deal with Ottawa turned into Isaac Macleod. He has not played at the NHL level in his five years with the club.

The three pieces Ottawa obtained in the trade all came with different results. One is still on with the club, another was sent to the AHL, and the third was traded at the deadline.

Out of this deal, forward Milan Michalek is the only player still affiliated with the Senator’s organization. He has put up 214 points in 380 games and was one of Ottawa’s best producers in the 2011-2012 season. However, his play has been rather inconsistent over the years and has a minus-34 rating to show for it.

Despite his varying level of play, Michalek– along with his brother– has represented the Czech Republic in the Olympics on two occasions (Vancouver 2010 and Sochi 2014). He was also chosen to play in the NHL All Star Game during the 2009 season when he scored 35 goals.

Jonathan Cheechoo was on a sharp decline by the time the Senators were able to get him. After his 56-goal campaign in 2005-2006 with the Sharks, his point and goal totals decreased consistently over the next four years. He would score just five goals for Ottawa in his first year with the team despite playing 61 games. This would not cut it in the NHL.

After just one season of playing in Canada, Cheechoo was sent down to the AHL where he faded into irrelevance. He is now playing for the HC Dinamo Minsk in the KHL.

The last portion of the deal was the 2010 second-round pick they obtained. Rather than using the pick themselves, they traded it to the New York Islanders at the 2010 trade deadline for Andy Sutton. That pick would be traded one more time to the Chicago Blackhawks, who used it to select goaltender Kent Simpson.

Sutton played all of 18 games for the Sens and earned just one point in that stretch. This lone point was in addition to a disappointing minus-seven rating, showing that giving up a second-rounder may have been a very high price to pay for him. Ottawa elected not to re-sign him in the offseason.

Despite Michalek’s lone all-star caliber season, I believe San Jose won this trade. Dany Heatley was a production machine even in his “bad” years with the club. While the Sharks did trade him away for somebody who essentially got paid to lay in a hospital bed, the bottom line is that Ottawa gave up a high-performer for one inconsistent player and two skaters that didn’t even combine to play one full season with the club. The Senator’s return on Heatley could have been, and should have been, so much better.