NEWS: We have entered into an AHL affiliation agreement with the @Chicago_Wolves.

Tuesday’s announcement of the Golden Knights and Chicago Wolves joining forces confirms rumors that have been floating around the hockey universe for several months. It’s a five-year deal and the Knights will be able to transition players between Vegas and Chicago beginning with the 2017-18 season. The Wolves will serve as the primary affiliate for the Golden Knights.

Vegas already has a player on the Chicago roster and has for over a month. Reid Duke, the first player signed to a contract in Knights’ history, signed a professional try-out contract with the AHL franchise on April 7th.

McPhee: Relationship Will Be “Mutually Beneficial”

It’s to be expected that Vegas general manager George McPhee would be excited to have one more thing off his plate ahead of the NHL expansion and entry drafts. That said, McPhee appears genuinely excited to work with the Chicago franchise.

“We are proud to have the Chicago Wolves as our first in team history,” McPhee said. “I would like to thank Don Levin, Wendell Young and the rest of the Wolves organization for their commitment to the game and helping young hockey players grow to reach their full potential as professionals. Chicago is without question one of the strongest, most passionate hockey communities in North America. This is a relationship that we truly believe will be mutually beneficial.”

“If you look at George McPhee’s history, he has always been a general manager who believes that winning is an important part of developing players,” Levin said. “Professional playoffs are different than the regular season and he understands that and he wants his players to be ready to win.” 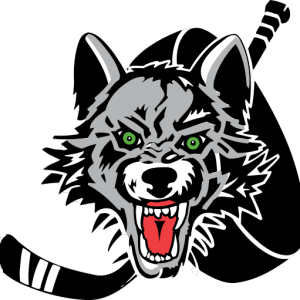 For what it’s worth, Vegas is hooking up with one of the more successful AHL teams over the last two decades.

Once upon a time in 1994, the Wolves were a part of the International Hockey League. In seven IHL seasons, Chicago reached the Turner Cup Finals three times and twice captured the league championship.

The IHL didn’t make it, though. That league folded in 2001 and Chicago, along with five other teams, were included in the AHL expansion before the 2001-02 season.

Since joining the AHL, Chicago has won five division championships, three conference championships, and a pair of Calder Cups. In 2016-17 the Wolves made the playoffs as champions of the Central Division. They knocked off the Charlotte Checkers in the first round before falling to the Grand Rapids Griffins in five games.

That success has come with plenty of dance partners. When the Wolves entered the AHL they were paired up with the Atlanta Thrashers. That relationship lasted for a decade. In 2011, after the Thrashers relocated to Winnipeg and became the Jets, Chicago signed a two-year deal as a minor league affiliate for the Vancouver Canucks.

Most recently the Wolves have worked with the St. Louis Blues, signing a three-year contract in 2013. Rumors that the Blues would not be renewing their contract with Chicago date back to last year.

Tuesday’s announcement is a huge step in the process of building Vegas into contending NHL club. More than 88 percent of NHL players make their way through the AHL. George McPhee knows this:

“American Hockey League affiliates play a significant role in the success of all NHL clubs.”