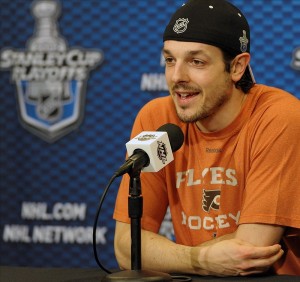 Briere will skate north of the border this year. (Eric Hartline-US PRESSWIRE)

Last year, I penned a piece regarding what I believed to be the five most overrated NHL teams going into the 2012-13 NHL season, based upon Vegas Insider’s odds for each team to win the Cup at that time. The five teams? Try Buffalo (20/1), Chicago (10/1), Philadelphia (12/1), Minnesota (no odds cited) and Detroit (12/1). Sure, I absolutely nailed a few, but placing the eventual Stanley Cup champions and a conference finalist on the list probably earned me the nickname “Nostradoofus, at least back then. Some would still agree with that self-assessment today.

Undaunted, I’ve decided to channel the fearless prognosticator within me once again. Utilizing this list as the basis of my determinations as of this writing, the following are my five most overrated teams as we turn the corner toward the impending 2013-14 NHL season. As always, objects in the mirror may be closer than they appear.

How is it possible a team which finished first in the Northeast division with a 29-14-5 record before bowing to the Ottawa Senators in the quarterfinals could be deemed overrated? Remember, we’re talking about Vegas odds here, which rank them as the 10th most likely team to win the Cup at 20/1. While not in the top tier, that’s still pretty darned good considering les Habs haven’t advanced past the second round of the playoffs in eighteen of the past nineteen seasons. Even my Kings look good by comparison.

Montreal remains a relatively small team, particularly on the right side. The addition of the diminutive Briere may help with overall team skill if he’s still got it, but certainly not strength. Given the playoff results since their last Cup, the addition of the always-strong Detroit Red Wings to the newly-configured Atlantic division and with the bigger, deeper Bruins remaining the team to beat, it would seem that Montreal will be hard pressed to make the playoffs this season, much less a top-ten team.

Another reigning division-winner, another overrated team when considering their 20/1 odds to win the Cup. The Ducks built a huge lead in the Pacific last year, then hung on for dear life at the finish line to edge Los Angeles by seven points. The second-half slide continued in the playoffs, as Anaheim lost in the conference quarterfinals to the Red Wings.

Teemu Selanne, as always, is slow-walking declaring his intentions for the upcoming season. Even if he joins the fold, the Ducks seem poised to take a step backward. Bobby Ryan is now skating in Ottawa, and Dustin Penner returns to the Ducks a mere shadow of his former self, as is Saku Koivu. Kyle Palmiere, Andrew Cogliano and Jakob Silfverberg are on the rise, but it still feels more like a transitional period than a division title defense in Orange County. The league’s eight-ranked offense may take a hit, and with it, the team’s fortunes as well. Quack!

The Rangers and Canucks are practically mirror images of one another. They finished with the same number of wins, were both ousted from the playoffs by the end of the second round, more or less traded head coaches, and have earned twin reputations as disappointing postseason performers, at least in recent years. Thus, in a sneaky little trick that technically violates the precepts of the article, I’m putting both teams together in this slot as a Vegas-overrated duo.

New York is a cool 14/1 to win it all, tied with Detroit. Vancouver is an even better 12/1, tied with conference finalist Los Angeles. The Rangers appear to have the superior defense, whereas the Canucks arguably get the nod offensively — although the Sedins aren’t getting any younger. Neither fan base is known for their patience, so it remains to be seen whether or not the excommunicated head coaches can resurrect the playoff fortunes of their new teams. Vegas says yes, but this list says “meh”.

Three straight overall #1 selections from 2010-2012 (not to mention a passel full of other high-round selections in recent years) have bolstered the team with young guns. Admittedly, I really want to see the Oilers return to prominence. It’s been a long, long time: seven years ago, they lost in the Stanley Cup finals to the Carolina Hurricanes. Since then? Zippo.

And yet, the Oilers still finished 12th in the 15-team West last season. The offense ranked 24th overall in the NHL, and the defense a slightly-better 19th. You’d think they couldn’t be overrated, but you’d be wrong, as they are a mere 30/1 to win it all. Maybe this will be the year things all come together, but they get the same odds as three 2012-13 playoff teams? I think not.

The oddsmakers just can’t get enough of the fish. Every year, they appear near the top of the list, and every season, they fall short. You can set your watch to either one. They are the veritable dictionary definition of overrated.

It’s hard to complain too loudly about the love, given the likes of Joe Thornton, Patrick Marleau, Brent Burns, Logan Couture and Antti Niemi, amongst others. However, other Western teams have managed to catch the proverbial lightning in a bottle that has eluded San Jose, and it hasn’t helped that depth, special teams and bad bounces have helped tank the Sharks’ chances.

With that said, the Sharks sit 16/1 to win it all, ahead of all but eight teams. Yes, they’ve made the conference finals twice in recent years, but on an overall basis, there’s no way they belong that high up the list. Now, if there were a few zeros afterwards …