November has been anything but easy for the NHL’s best player. Sidney Crosby started the 2014-15 season off with 15 points in 9 games and looked poised to make his case for the league MVP once again. But something seems off. The points aren’t coming easy anymore and Crosby has scored just 1 goal in his last 11 games, which raises the question, is there something wrong with Sidney Crosby?

Crosby and Dupuis weren’t consistently skating on the same line, but Dupuis’ absence has caused Mike Johnston to move Crosby’s winger Patric Hornqvist and match Blake Comeau with Crosby and Chris Kunitz. Since the lines have been shifted, Crosby has just one point, a goal that came against Montreal. It’ll take some time for Sid to adjust to Comeau and vice-versa. Crosby was clicking well with Hornqvist and Comeau will continue making progress that allows Crosby space to maneuver. 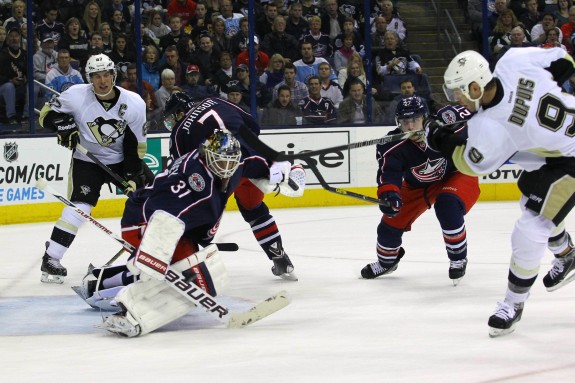 Crosby isn’t getting Powerplay Chances… because the power play has been absent. The New York Islanders did an outstanding job in their recent home-home series with the Penguins and took just 1 penalty in the two games. The best way to keep the leagues best power play unit off the score board is to keep them off the ice. However, it should be noted that the Penguins are just four of their last twenty-three attempts after starting the season off with a 40% plus efficiency rating on the power play. It’s hard to be productive when you aren’t getting game opportunities.

HALF of Crosby’s 26 points have come on the powerplay.

Crosby historically hits a funk in November. Hardly a reason for concern. But hasn't looked himself last few games.

One Reason for Concern

The Penguins are 13-4-2 and find themselves tied for first in the Metropolitan division. In their 13 wins, Crosby has 7 goals and 18 assists, 25 points. (Those 18 assists lead the Pens and are tied for 2nd in the NHL.) In the Pens 6 losses, Sid has just 1 goal and zero assists. The Penguins expect Crosby to produce points, but they also need to find other consistent scoring.

The truth is, there’s nothing wrong with Sidney Crosby.

Sid the Kid will bounce back and the Penguins will keep rolling. There’s no need to worry, as of now. He’s the best at what he does, which is why Pens fans are concerned with just 11 points in November. 11 points isn’t bad, but against teams that AREN’T the Buffalo Sabres, he has just 3. That being said, I still see no reason to worry. There’s nothing wrong with Sidney Crosby, unlike last spring.