We’re only just past the halfway mark of the season (46 games, to be exact), but Erik Karlsson has already had seven different defense partners.

It’s true, every single defenseman that has stood on the ice for the Senators this season has had a turn with the Norris-winning D man. Marc Methot has been Karlsson’s regular partner since he was acquired from the Columbus Blue Jackets in 2012, but because of the 29-year-old’s nagging back injury this year, he was unable to play for the better part of the first half of the season.

Because Methot was out of commission until early January and he’s only played seven games since his return, the question should be asked: Who is the perfect partner for Erik Karlsson?

Though every defenseman has had their own time with Karlsson, it’s obvious who the regulars have been this season. 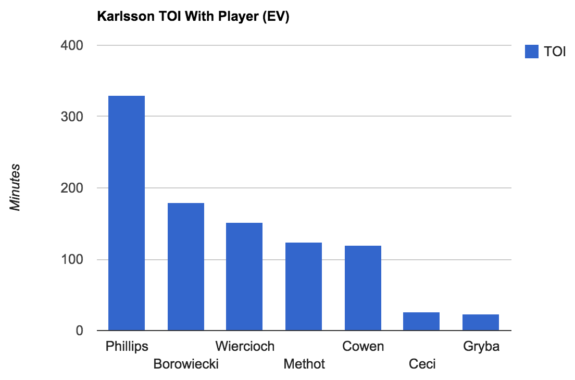 With Cody Ceci and Eric Gryba only having played around 25 minutes with Karlsson, maybe it’s unfair to keep them in the conversation, but there are five other D men with over 100 minutes played with the Senators’ captain.

At first glance, just looking at goal differential while at even strength, the list of worthy candidates shortens just a bit.

The only plus players are Borowiecki, Wiercioch, Methot and Cowen, but Cowen’s goals against per 60 minutes is frightening. The risk really outweighs the reward with him.

Methot has the best ratio between goals for and against per 60, but Wiercioch is a close second. Also, it looks like the Ceci and Karlsson experiment was cut short for all the right reasons.

Possession wise, Karlsson has really only had two adequate partners. 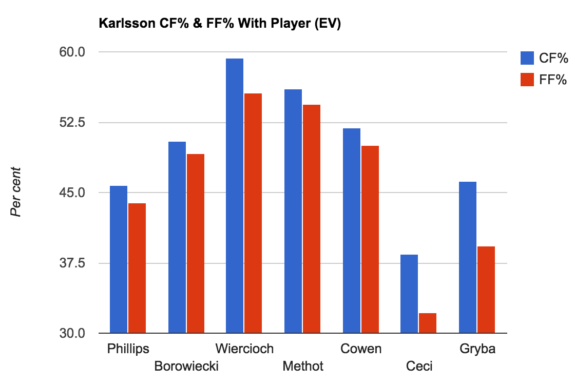 Together, Phillips and Karlsson had a 45.79 CF% and a 43.94 FF%. The fact that they were kept together for over 330 minutes of even strength ice time is outrageous.

So far, it seems evident that Karlsson profits greatly from being alongside Methot and Wiercioch.

But maybe it has nothing to do with who has the best chemistry with Karlsson. Maybe it’s just because Methot and Wiercioch are simply superior to the rest of the defence corps. 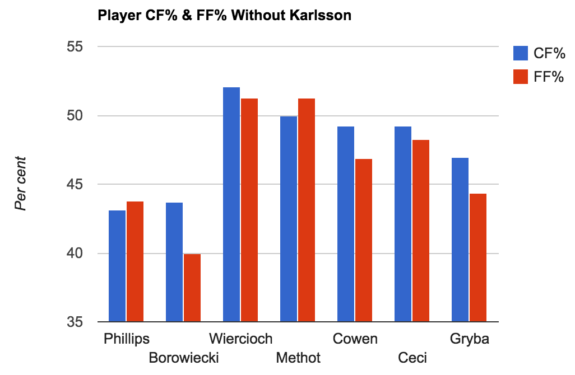 Methot and Wiercioch have proven that they are a cut above the rest. It’s just a shame that between the two of them, they only have 36 games played this year. For Methot, the injury was the one thing holding him back from participation, but for Wiercioch, he’s been a healthy scratch for 19 games this year.

12 of the 19 times Wiercioch was a healthy scratch it was under Paul MacLean. So maybe Dave Cameron has shown a little more faith in the 24-year-old, but there really is no reason to sit him at all.

There are some defensemen who only have chemistry with certain partners. Maybe it’s a comfort thing or maybe they only fit in a particular part of the lineup, but for whatever reason, some players just don’t play well with others.

Wiercioch is not one of those players. He can partner with anyone, and he’ll have success, even if it means he has to carry them. 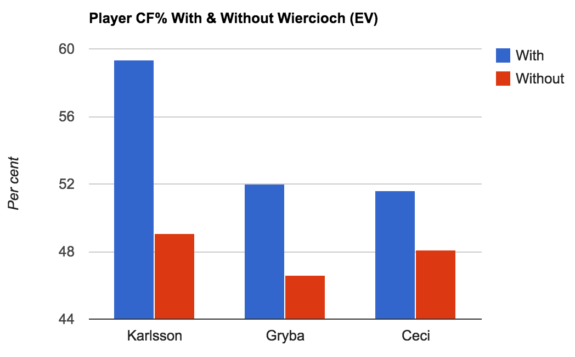 (Phillips, Borowiecki, Cowen and Methot were not graphed because sample size was less than three minutes)

This is a perfect example of how versatile Wiercioch is. On the top pairing, Karlsson benefitted greatly. On the second pairing, Ceci improved. And on the bottom pairing, Gryba flourished beside Wiercioch.

All three of the consistent partners Wiercioch has had this season see a dramatic decrease in their possession when moved away from him. It’s appalling that Wiercioch be benched one game, let alone 19.

If I’m picking who gets to play with Karlsson, Methot gets my vote.

Though Wiercioch does have the slightest edge over Methot in our analysis, this time, I’ll trust the eye test for the long run.

When Erik Karlsson won the Norris Trophy in the 2011-12 season, he played with Filip Kuba. Kuba was a strong defensive defenseman and that’s exactly what Methot is.

Karlsson plays his best hockey when he has a stable and reliable partner behind him. It’s no secret, he likes to join (or lead) the rush. With Methot (a more defensively minded player than Wiercioch), Karlsson has more leeway to take risks and provide the offense that the Senators lean on him for.

Wiercioch, if he ever gets continual playing time, would be a perfect fit for a second pairing. The fact that he can play with an array of different partners is why he fits so well in the bottom four. With eight defensemen on the roster and Karlsson and Methot a lock to play every night, Wiercioch, as long as he is playing that night, can fit in with anyone.

While Methot’s is set to be a free agent in July, Wiercioch’s contract is only good for another year.

With the Senators apparently looking for a top-six forward at the moment, signing Methot and extending Wiercioch should be a very close second on their to-do list.

Otherwise, this already unimpressive defensive group could soon be in an even bigger mess.