Expansion talk has taken over NHL circles over the past 24 hours. Despite the fact that it is premature to suggest four new teams could be added to the league by 2017, it would not be unreasonable for the NHL to add a team or two by the year 2020. Considering the growing popularity of the sport, expansion into markets like Quebec City or Seattle would make perfect sense.

To populate the rosters of new expansion teams, the NHL would likely turn to an expansion draft as it has in the past. An expansion draft was most recently held in 2000 when the Minnesota Wild and Columbus Blue Jackets were added to the league. It seems like a matter of time before another expansion draft is held.

In that event, who should the Flyers protect in the draft? There are a couple of guidelines and options to choose from, based on the rules from 2000:

In both scenarios, first and second year pros are automatically exempt. In addition, all unsigned draft picks are exempt unless they are from European clubs, and were drafted at least 4 years prior. The final rule was that only one defenseman or goalie could be taken from each existing team, and each existing team could lose a maximum of two players. This condition would have to be relaxed if four teams were added, but we’ll continue as if it’s still in place.

The Flyers in an Expansion Draft

I think every Flyers fan would universally say that Option #1 is a better choice for the franchise. Steve Mason is the only goalie worth protecting, and it allows the franchise to protect an additional 2 forwards and 2 defensemen. Before we begin protecting, let’s eliminate the players that are automatically exempt:

They are all either unsigned draft picks, or in their first or second pro season.

In deciding who to protect, most of the decision are no-brainers. The following would absolutely be protected, without question:

That leaves three forwards, and two more defensemen that the Flyers would need to make a decision on. Up front, I would be pretty confident that the Flyers would protect RJ Umberger (but it’s not a complete lock). On defense, Luke Schenn is likely safe as well. The prime candidates for the last two forward spots would be Vinny Lecavalier, Zac Rinaldo, and Jason Akeson. Others like Ryan White, Jay Rosehill, and Chris VandeVelde don’t deserve consideration. 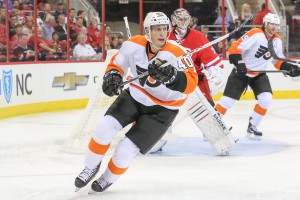 Lecavalier is a very tricky case. Of those three, he is the best hockey player, but has the worst contract. It was well publicized this summer that the Flyers wanted to move on from Lecavalier, but could not find a team to take his contract. Would an expansion team jump at the chance to bring in Lecavalier due to his name (and in the process rid the Flyers of his contract)? I bet they would. So, if GM Ron Hextall is savvy, he should leave Lecavalier unprotected in hopes that somebody takes him, and gets rid of his contract.

In that case, Rinaldo and Akeson would both be protected. Personally, I’m not of the belief that Rinaldo is an NHL player. However, the organization would likely protect him because he is a favorite among a group of fans that is still clinging to the Broad Street Bully days.

Moving on to the final defenseman spot, it’s between Kimmo Timonen, Niklas Grossmann, Michael Del Zotto, and Nick Schultz. Timonen is easily the best player, but unfortunately, a blood clot issue has possibly ended his career. Of the four mentioned, it would likely come down to Grossmann and Del Zotto. Considering the Flyers already have enough defensive defensemen as it is, I think Del Zotto is the better choice.

That leaves us with the following 15 protected players:

That would mean that all of the following would be unprotected, and eligible to be selected in an expansion draft:

This option is compliant with all rules, as at least one defenseman (Grossmann) and two forwards (Lecavalier, White) fit the games played requirements.

Who would you protect if you were Flyers GM Ron Hextall?