Coming into the season, Minnesota Wild fans had a lot to be excited about. The team signed All-Star forward Thomas Vanek (277g-279a—556pts) in the off-season.

That enthusiasm is starting to fade, and fast.

Currently, the Wild 16-12-2, 34 points,  sit in 10th place of the Western Conference standings and if the 2015 Stanley Cup Playoffs started today, the Wild would be watching from the sidelines. The Wild are currently four points out of the final wild card spot. For comparison sake, after 30 games last season the Wild were 17-8-5, 39 points.

Minnesota Wild beat writer Michael Russo sums it up best in one of his latest blog posts. “It has been a month now since the Wild has won consecutive games. Tonight, it lost consecutive games for the first time since Nov. 8 and 11 and is a mediocre 5-5-2 in its past 12 and a yucky 2-2-2 in its past six at home. I think that’s the definition of middling.”

Some of the players have begun to express their frustration with the current state of affairs.

“We’ve got to stop losing,” Parise said. “Stringing a couple wins together is the only way to get out of it.” (Pioneer Press)

So far this season, there’s been a few top-six forwards that have failed to live up to expectations for the Minnesota Wild. If the Wild are going to be successful in the second half of the season, these players are going to have to pick it up and start contributing on the score sheet.

In my opinion, one of the biggest disappointments on this team has been play of forward Charlie Coyle (2g-9a—11pts).  Coyle signed a hefty contract extension in October. To date, Coyle has yet to show he’s worth the money the Wild spent on him.  Coyle has scored a measly (0g-3a—3pts) in the last 15 games.

Equally unimpressive, has been the play of forward Mikael Granlund (3g-10a—13pts) Last season, Granlund gave us glimpses of greatness, but this season he has been consistently inconsistent. During the month of December, Granlund has scored (0g-3a—3pts) and is a (-5).

Thomas Vanek came to the Wild with much fanfare, so far he’s been an utter disappointment. Through 30 games, Vanek has scored (4g-14a—18pts). Those are pretty anemic numbers for a forward that’s scored almost 300 goals in the National Hockey League. During the month of December, Vanek has scored a mediocre (2g-2a—4pts) in seven games. Vanek is also a (-4) during the month of December.

I have seen fans on twitter referring to Vanek as Danny Heatley 2.0.  Personally, I think that’s a little harsh since Heatley has been injured for most of the season and scored (0g-0a—0pts) in five games. 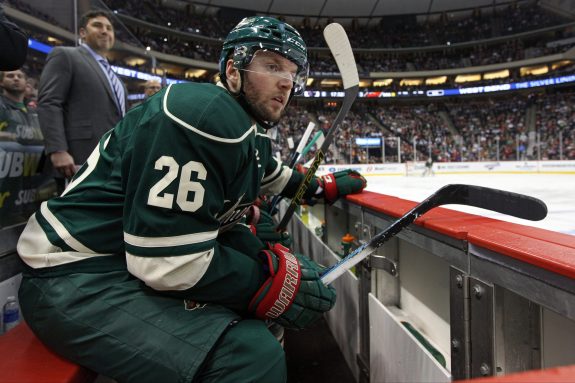 I want to be clear, I am not suggesting that the Wild need to sign a “tough guy” that sits on the end of the bench and plays four minutes a game. The Wild are in need of skilled player that plays a hard, tough game and sticks up for teammates when needed.

The Wild will get some of that needed toughness back. Matt Cooke returns to the lineup after missing 22 games with a Hip Flexor injury. Cooke’s physical presence and penalty killing was missed by the Wild during his absence.

In conclusion, the Minnesota Wild are underperforming at the halfway point, and if they don’t pick it up they’re going to be left on the sidelines when the 2015 Stanley Cup Playoffs begin. There’s enough blame to go around. The Wild need to find a way to win as a team and stop performing like a bunch of fractured parts.

4 thoughts on “Wild Players Frustrated with Current State of Affairs”