Steven Stamkos’ pursuit of another 50-goal season is a bright spot in a campaign of increasingly dim potential for Tampa Bay Lightning fans.

Scoring 50 goals has long been a gold standard of individual accomplishments for NHL skaters. Difficult for even the truly great, it’s an accomplishment that conjures up images of the game’s most famous – Gretzky, Lemieux, Bossy, Lafleur, and, of course, the man who first managed the feat – Maurice “Rocket” Richard.

Only 90 players have scored 50 or more goals in an season since the NHL began play in 1917, and fewer than half of those have done it more than once, as 23-year-old Stamkos now threatens to do.

This year, Stamkos may be the only player to reach the 50-goal mark. 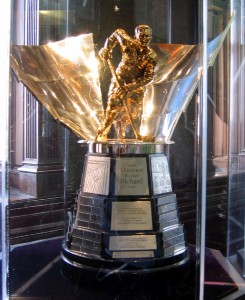 Maurice "Rocket" Richard was the first to score 50 goals in an NHL season. The league now presents a trophy named in his honor to the season's top goal-scorer. (Kmf164)

Here are ten things to ponder while watching Stamkos chase 50.

10. Maurice Did it First. Richard established that scoring 50 goals in a season was possible in 1945, and he only needed 50 games to do it, an accomplishment only duplicated so far by Mike Bossy, Wayne Gretzky, Mario Lemieux, and Brett Hull. Despite playing in the NHL for another 15 years, Richard never scored 50 goals in a season again.

9. It Took 16 Years For Anyone to Do It Again. After Richard, it wasn’t until Bernie “Boom-Boom” Geoffrion scored 50 goals in 68 games during the 1961-62 season that the magic total was matched.

8. Some Years It’s Easier than Others. Changes in the nature of the game (and the length of its season) have influenced how many 50-goal scorers the NHL has produced over the years. 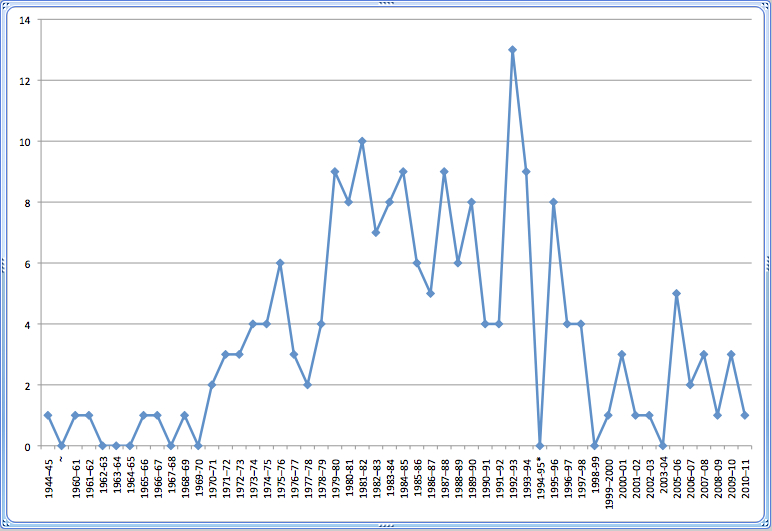 The number of 50-goal scorers has fluctuated over the years since Maurice Richard first accomplished the feat in the 1944-45 season.

The number of 50-goal scorers peaked in the 1992-93 season, partially because the league played a record high 84-game season that year (as they also did in 1993-94). The recent post-lockout period has seen dwindling numbers of 50-goal scorers, despite being a faster, less-obstructed game.

7. The Rocket Truly Matched…Finally. Mike Bossy was the first to duplicate Richard’s extraordinary 50 goals in 50 games. But many have forgotten that Bossy still needed two goals going in to that 50th game, and with less than five minutes remaining in the game, he hadn’t scored. In one of the more dramatic sequence of events in NHL history, Bossy scored goal number 49 at 15:50 of the third period. Then, with a mere 1:29 left on the scoreboard, Bossy took a pass from teammate Bran Trottier before firing home number 50. Maurice Richard was in attendance at the game, and congratulated Bossy personally.

6. And Then Came Gretzky… In textbook Gretzky fashion, number 99 not only managed to match his predecessors most impressive records, he shattered them. During the 1981-82 season Gretzky scored 50 goals in 39 games. Not only did he set what he considers the hardest of his records to break, but he even outdid Bossy’s in-game drama. Gretzky began that game on December 30, 1981 with 45 goals. On a Toronto sports radio talk show, he recently said he felt scared entering that game, fearful that he might be the guy who scored 45 goals in 38 games, but couldn’t live up to the expectations of breaking Richard’s record. Wayne needn’t have worried. He scored five goals that game, setting what many feel is an unbreakable record.

5. Some Teams Produce More than Others. When comparing NHL teams’ production of 50-goal scorers, longevity and quality of franchise matter – but not as much as having one key player who can replicate the feat over and over again. The Edmonton Oilers can claim the most 50-goal scorers with 16 – but Gretzky provided half of these seasons. Here are the top teams by occurrence, but with unique players also noted.

4. Some Teams Don’t Produce Any. Of the active NHL teams, only four can’t claim a 50-goal scorer – the New Jersey Devils, the Minnesota Wild, the Columbus Blue Jackets, and the Nashville Predators. The Winnipeg Jets and Carolina Hurricanes are still looking for their first players to reach the 50-goal plateau in their current incarnations.

3. Some Players Do It Often Gretzky and Bossy lead the NHL as the players who have scored 50 or more goals the most often, each having done it nine times. Guy Lafleur, Marcel Dionne, and Mario Lemieux all did it in six seasons.

2. You Don’t Need a Strong Team Around You. Many of the NHL’s 50-goal men played for powerful, dominant teams like Richard’s Canadiens, who had a point percentage of .800 in 1944-45, but not all benefited from playing for such strong teams. Here are the players who still accomplished the remarkable with the five lowest team point percentages. Who needs teammates, anyway?

These players are the 50-goal scorers who played for the five least-winning teams.

1. Finally, a Trophy. In 1998-99 the Montreal Canadiens donated a trophy to the NHL to be given annually to the league’s top goal-scorer. It’s name? The Maurice “Rocket” Richard trophy of course. But like Rick Nash, Ilya Kovalchuk, and Jarome Iginla – co-winners of the trophy in 2003-04 – not all of the recipients have needed 50 goals to take home the award.

Stamkos has already won the Rocket Richard trophy once, sharing it with Sidney Crosby after scoring 51 goals in the 2009-10 season. At the moment, he’s the favorite to take it home again, but scoring 50 goals is another matter, which is why it remains so special to hockey players and fans alike.

Enjoy the growing hype as Stamkos inches closer one goal at a time.