On Dec. 13 the NWHL announced that their 2018 Draft is scheduled for Dec. 19 and 20, 2018. The two-day event is the fourth to be held in league history, and the first one to occur while the current season is already taking place. The five rounds of the draft will be split between the two days, with the opening two rounds beginning at 11 a.m. ET on Wednesday, Dec. 19. The selections for the rounds will be announced via Twitter and Instagram. The remaining three rounds will be held on Thursday, Dec. 20, also starting at 11 a.m. ET.

The 2018 NWHL Draft is scheduled to take place on Dec. 19 and 20. (Photo provided courtesy of NWHL website/Chris Botta).

What is perhaps most interesting to note about this NWHL draft is that the selections could make their professional debuts much shortly after they are selected than what they had previously. For example, the 2017 Draft was held on Aug. 17 of that year while the draftees were preparing for their senior NCAA seasons in most instances. Boston Pride defender Mal Souliotis was chosen as the eighth overall pick for that draft. She would have to wait nearly seven months until she had finished her playing career at Yale University until she could sign with the Pride. With the 2018 Draft being held now so close to 2019, selected players would only need wait between two and three months to sign.

The Buffalo Beauts’ Hayley Scamurra is a prime example of how that can work out in the best interest of a team and the player. Buffalo selected her in the 2016 Draft, and after completing her final season of play at Northeastern University, Scamurra joined the Beauts at the tail end of the 2016-17 NWHL regular season. She proved instrumental in helping the Beauts win their first Isobel Cup. Perhaps one of the five NWHL teams could get just as lucky this time around.

Rules of This Year’s Draft

The rules for the 2018 NWHL Draft are rather simple to follow. With a set time limit for each selection, all five teams will need to move quickly but efficiently. They will also need to have done plenty of homework in advance. The selection rules are as follows:

There will be five selections in each round. Each team will have 90 seconds to draft a player. Draft order was determined based on winning percentage in the first half of the current season, utilizing goal differential as the tiebreaker. Based on how the five teams performed through the first half, the draft order is as follows: 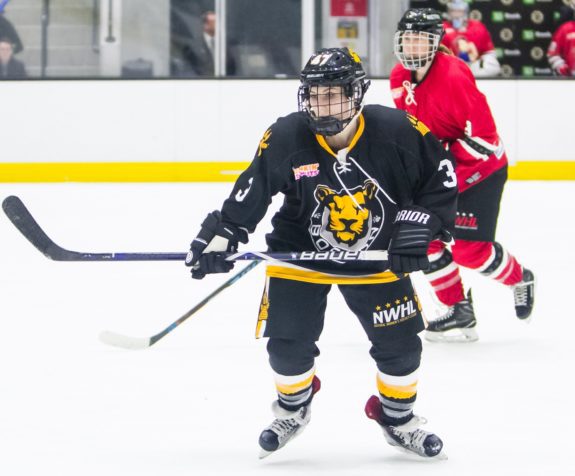 The Boston Pride’s Mal Souliotis signed with the team upon finishing her senior NCAA season with Yale University. The Pride selected her eighth overall in the 2017 NWHL Draft (Photo Credit: Al Saniuk).

As is the case with many free agent signings in the league, geography oftentimes plays a factor in draft selections. Case in point, the Boston Pride. Boston has six players from the 2017 draft class on their current roster. Three of the players were their own selections – Souliotis, goaltender Katie Burt, and defender Lauren Kelly. All three players either played for a Boston area school and/or are from Massachusetts. Additionally, Denisa Křížová (Connecticut), Toni Ann Miano (Metropolitan) and McKenna Brand (Metropolitan) were each selected by other teams, but ended up signing with Boston during the summer. All three of these players played for Beanpot schools.

Potential Outcomes of the Draft and Other Thoughts

One unique avenue to consider is this: does the likelihood increase that a player signs with the team that drafted her because not so much time will have gone by following the conclusion of the 2018 Draft? Perhaps there is less of a chance that players like a Křížová, a Miano, or a Brand sign with a team different. While it has always been a question as to how much the players themselves feel bounded by a team that picks them, there is nonetheless an excitement over being drafted by a professional team.

It is quite possible that the recent excitement over being drafted will further entice a player to go with the team who took them. Whereas with previous drafts, more than half a year would go by before the possibility of even signing could occur. Suffice it to say that so few players beyond Souliotis and Scamurra opted to even sign with teams once their senior college seasons had ended. With the draft being so fresh in players’ minds, maybe a few more opt to sign up as well. 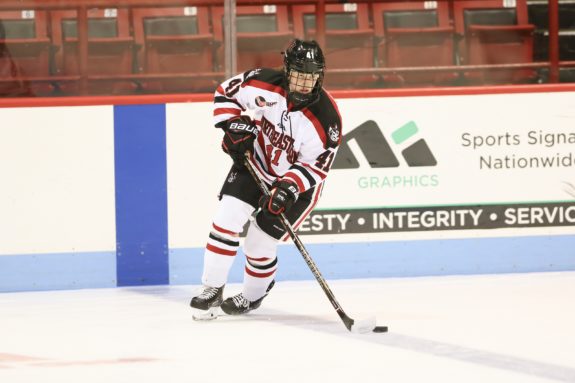 Northeastern University’s Denisa Křížová was the first player from the Czech Republic to be drafted into the NWHL. While the Connecticut Whale selected her, she has begun her professional career with the Boston Pride this current 2018-19 NWHL season. (Photo Credit: Jim Pierce/Northeastern Athletics)

A final thought to ponder: do we see more European selections this time around. Křížová made history when she was not only the first Czech to be drafted into the NWHL, but only the second European ever picked (Switzerland’s Lara Stalder of the University of Minnesota Duluth-Bulldogs was the first when she was selected as the final pick of the 2016 Draft). This current 2018-19 NWHL season has players in the league from the Czech Republic, Finland, Russia, Sweden, and Germany. Given their success in the league, and with more and more Europeans being showcased in the NCAA, it would seem that a few more players will end up being selected who are not from USA or Canada.

Stay tuned to Twitter and Instagram to see how the 2018 NWHL Draft pans out, and which teams give themselves a leg up come playoff time.