There is nothing easy about having to change ideas on the fly. Sometimes even the best laid plans are scrapped, and the creative process must be restarted at a much quicker pace. Care for an example? Well a previous draft of this very column may or may not have had the phrase “Pacific Division champs” in it. Sometime in between the first intermission and the midway point of their 82nd and final hockey game of the season, the Los Angeles Kings had enough. No more regular season. No grinding it out in the dirty areas. And enough skating hard against a Winnipeg Jets team with nothing to play for but pride and a future place in the organization (which actually goes a long way). So no Pacific crown for the Kings.

And that’s fine. Because L.A. doesn’t need a division title to achieve their ultimate goal, and this team is perfectly capable of winning several pressure-filled playoff games on the road. But the effort the club showed down the stretch  against Winnipeg was profoundly different from the one that had taken the ice for the previous 81 games of the 2015-16 NHL season. The Kings were embarrassed a season ago, and made every discernable effort to get back to where they belong. And here they are. The finale of their undercard might have been listless, but now it’s time for the main event. 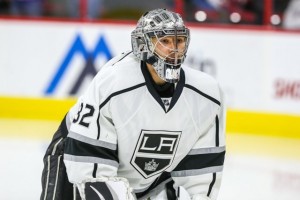 Before we dive into why the Kings are going back to the postseason, I want to explain something. One player you won’t see at the heart of this discussion is goaltender Jonathan Quick. That’s not because Quick isn’t valuable, because he is certainly is. But his numbers are virtually identical to last season (exact same save percentage of .918, and a goals against average of 2.22 this year as opposed to 2.24 in 2014-15). Quick was not the reason this team failed a year ago, nor has his play been the reason why the Kings have steadily improved. He’s the same Jonathan Quick he’s always been. Stealthy, unconsciously flexible, clutch beyond belief, and one hell of a model American.

L.A.’s return to contention sure wasn’t easy. It took preparation, constant player development, and a whole lot of adaption as the year progressed. Let’s take a look at the five biggest reasons why the Kings are bonafide Stanley Cup candidates again.

Opening night brought optimism to the Staples Center, where thousands of pent-up Kings fans were ready to get back on track as an NHL power. They then sat back and watched in horror as the team got thumped by the Sharks 5-1, dropped their next two games, and were clearly stuck in the early season muddy waters. Over the course of a lengthy campaign, there are few coaches better at navigating through chaos than L.A.’s favorite farmer, Darryl Sutter. The coach didn’t wait for the Kings to be dead and buried before making lineup adjustments. Sutter shifted around his forward lines immediately, electing to slot newcomer Milan Lucic on a line with less speed and more shooting precision. Joining Tyler Toffoli and Jeff Carter up front, Lucic soared. Here’s one example:

What makes Sutter a good coach is that he’s able to identify what’s not working and improve upon it. But what makes Sutter a great coach is his ability to improve what’s already good to begin with. The Kings shined with the Lucic/Carter/Toffoli trio, but their coach adjusted the lines again so that his unit would not become stale. Sutter uses talented and versatile forward Anze Kopitar (who is smooth enough to play with anyone) to jump-start slumping players on a regular basis. Here’s a line of Kopitar, Toffoli, and Lucic  (the later two of which had experienced their own slumps) teaming up for a goal against Montreal:

Sutter has done an admirable job ensuring that the Kings are never struggling for too long, and he has given his forwards experience playing with a variety of their teammates. When the playoffs hit and players get banged up, L.A. won’t have to worry about a new line combination messing with their potential productivity. Forwards will most likely be reunited, and I bet it will feel so good (I’m sorry, it was sitting right there I couldn’t pass it up).

Shoring Up the Blue Line 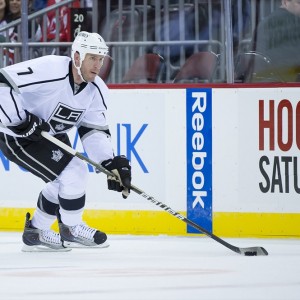 Another keen observation could be made as soon as opening night; the Kings defensive core was in serious trouble. There was the superstar (Drew Doughty), three capable supporting blue liners (Jake Muzzin, Alec Martinez, and Brayden McNabb), and that was basically it. The bottom of the defensive depth chart did not have high expectations to begin with, and yet they still underachieved in the first month of the season. If general manager Dean Lombardi has a calling card, it’s acquiring talent via a mid-season trade. Lombardi understood that defense was going to be the one area that could terrorize his team’s postseason chances, so he acted fast. He brought in Luke Schenn from the Flyers, and swapped out the inconsistent Christian Ehrhoff for another go-round with aging veteran Rob Scuderi. Impressive work considering Lombardi was basically playing a game of high-stakes limbo with the salary the cap line the entire time.

It’s important to note expectations when evaluating trades. Schenn and Scuderi were not brought in to be Denis & Jean Potvin, or Fulton Reed and Dean Portman. These were classic “lineup depth” trades, and both have delivered. Schenn is relishing in his smaller role with lesser expectations (11 points, +5 since joining the Kings), and Scuderi has played solid hockey in 21 games for L.A. (18 minutes per game is more than enough from the elder skatesman). And while the new pieces were getting acclimated, the supporting cast became more comfortable. Muzzin and Martinez have continued to evolve as a pair (though a Martinez injury put a slight damper in that), and McNabb started to gain confidence after being scratched on opening night. The Kings turned a weakness into a strength, through the vision of their general manager and the hard work of their roster. Though there is one man worth discussing further.

We could talk for hours about the sensational play of L.A.’s number 8 on the blue line, the sheer will he’s shown for six months, or the number of twitter feuds I’ve been roped into due to an article comparing his game to that of Ottawa’s Erik Karlsson (I never said either one of them was bad! Stop yelling at me!). For me it always comes back this question: What exactly does a franchise defenseman look like? They have to be willing and able to play upwards of 30 minutes a night on a consistent basis. They have to lead by example in their team’s own zone. And on top of all that, they have to inject offense when the situation calls for it.

Drew Doughty does it all for the Los Angeles Kings. He kept the defense upright when it was on the ropes, and then elevated his game further when the team started to find success. The improvement in Doughty’s game is incredible given the sheer difficulty of improving at his elite level, and the fact that the increased productivity can be seen in all areas of the ice. In one season, his plus/minus rating increased from +3 to +24, and his power play goal tally blossomed from one to nine. And that’s not factoring in exactly how much Doughty means to this defensive core. Without him the Kings would have a solid group of blue liners, but with him they are as good as anyone. Last year Doughty was one of the best defenseman in the league. This year he is simply the best, Norris Trophy or not.

L.A. addressed their lack of goal scoring in the form of Milan Lucic during the off-season. But an injury to Marian Gaborik and inconsistent play threatened the livelihood of the Kings’ offensive depth. In this instance, Lombardi took a conservative approach towards rounding out his lineup. Clearly moves were needed, so he made them. But he didn’t try to break the bank or sacrifice the Kings long-term future, because the trade market can actually be friendly towards low-end forwards. The Kings took a flyer (be glad this isn’t a drinking game) on the high-priced and offensively challenged Vinny Lecavalier, while getting Philadelphia to retain a good portion of his salary. Lecavalier has since regained his scoring form, and offers a solid veteran option at the bottom of Sutter’s playoff lineup. His relocation to L.A. has been better than a trip to an anti-aging clinic with Alex Rodriguez. 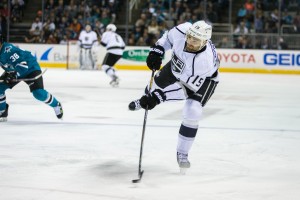 The Kings also added winger Kris Versteeg, who has multiple Stanley Cup titles to his name, to bolster their forward depth. Having four solid lines is a requirement come playoff time, and this team knows it can’t afford to take any chances on the health or productivity of its players. But along with the in-season additions of several forwards, L.A. has seen the benefits of in-house competition. Players like Kyle Clifford, Dwight King, and Nick Shore know that their spot is not guaranteed, and have ramped up their intensity and focus as a result. But the biggest pleasant surprise for the Kings in recent weeks? None other than Andy Andreoff, who has performed every minuscule detail with extreme effort and dedication. Andreoff’s hard work is even resulting in goals:

The number one objective of any fourth line forward is to keep the puck out of their own net. Then, and only then, can you move on to helping your team score. Andreoff has made that leap without sacrificing any defense, and has made himself a staple in Sutter’s postseason plans. The forward depth on this team is frightening.

14 teams play in the Western Conference, and eight qualify for the playoffs. The Kings were one of only six clubs that did not earn the right to contend for the Stanley Cup last postseason. And they absolutely hated every second of it. The NHL’s final tournament takes forever when you are consumed within it, but it also takes forever from the outside looking in. L.A.’s players, coaches, front office, and fans had to watch everyone else compete for hockey’s ultimate prize, and they had no role in determining a champion. 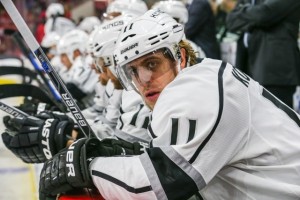 The Kings superb performance this year had a lot to do with the talent on the roster, but a great deal of credit should be attributed to the way the team played. It was the perfect mixture of fear and agitation. L.A. was afraid of going back to the loser’s pool, which is the NHL equivalent to the nerd Omega corner in the movie Animal House. And they were angry that they had that blemish on their record to begin with. So the Kings took the ice every night to remind people exactly who they were, what they were capable of, and where they really belonged. And that’s the postseason.

Losing sucks. But not getting to compete at all hurts way worse. You could see in their demeanor all season that the Kings wanted it more than last year. In their defensive zone, in front of the opposing net, and on specialty teams. On saves their goalie had no business making:

They just wanted it more. The team is hopeful that one game did not undue the work of an entire campaign. As for the rest of the league? Well they might not sleep as easy. Because their nightmare, the Los Angeles Kings, are back in the playoff picture.