Last September, the NHL announced the Washington Capitals would host the 2015 Winter Classic. A long waiting period ensued until the Chicago Blackhawks were named the Capitals’ opponent in June, while the location–Nationals Park–was revealed earlier this month, nearly a year after the initial announcement. From jersey reveals to ticket purchases, this article details five points of interest for any fan.

The 2015 Winter Classic will be the Capitals’ second outdoor game in franchise history and the Blackhawks’ third. The Capitals defeated the Pittsburgh Penguins in the 2011 Classic, while the Blackhawks fell to the Detroit Red Wings in 2009 but rallied to beat the Penguins in a 2014 Stadium Series contest.

As the league’s signature event, the Winter Classic is held to an impeccably high standard. The event is designed to cater to diehard and casual fans alike, and past games have featured teams with historic, bitter rivalries. History pinpoints the New York Rangers, Philadelphia Flyers, and Boston Bruins as natural opponents for the Capitals. Similarly, the St. Louis Blues and Vancouver Canucks would have been viable options for the Blackhawks.

However, both teams played their ultimate rivals–Pittsburgh and Detroit–in previous Classics. Since the Capitals were promised an outdoor game of their own, the league undoubtedly examined their natural rivals first. Yet the participation totals are startling: three games for the Rangers, two for the Flyers, and one for Boston. Awarding another outdoor game to the Rangers would be foolish; a similar case can be made for the Flyers.

While the Bruins-Capitals rivalry isn’t quite as intense, it’s certainly stronger than that of the chosen opponent. The Capitals and Blackhawks lack the fiery antagonism of matchups past and play one game before the Classic, leaving little opportunity to kindle a rivalry. But finances must be considered, and the Winter Classic is one of the NHL’s greatest marketing tools and a tremendous source of revenue. Given the Blackhawks’ meteoric popularity, the pairing is justifiable.

While the host and opponent of the upcoming Classic were revealed long ago, the NHL didn’t announce a location until mid-September. A handful of venues were allegedly in the running for consideration, including RFK Stadium, FedEx Field, Camden Yards, Nationals Park, and even the National Mall. The forerunners were rumored to be FedEx Field and Nationals Park, with the latter beating out its competition.

Debate ranged over the venues available, and which would be the best fit. Previous Classics were held exclusively in football and baseball stadiums, leaving D.C. United’s RFK Stadium an underdog. Yet it was one of the few venues located in D.C. itself–a quality Capitals owner Ted Leonsis emphasized. Camden Yards, home of the Baltimore Orioles, is known for its history and beauty–but the Capitals are too often lumped in with Baltimore and surrounding regions. Leonsis made no secret of his wish to have the game in D.C., though he ruled out the possibility of National Mall, citing logistical difficulties.

It’s unknown which venue was in direct competition with Nationals Park, but FedEx Field was presumably a strong contender. Despite its Landover, Maryland location, it boasts a capacity of 79,000. (Nationals Park holds 41,888.) But it’s also home to the Washington Redskins, a team whose controversial name has recently garnered tremendous negative press. Though far from squeaky-clean, the NHL surely wanted to embroil its siganture event in controversy. In the end, Nationals Park won out–a decision that was largely well-received. 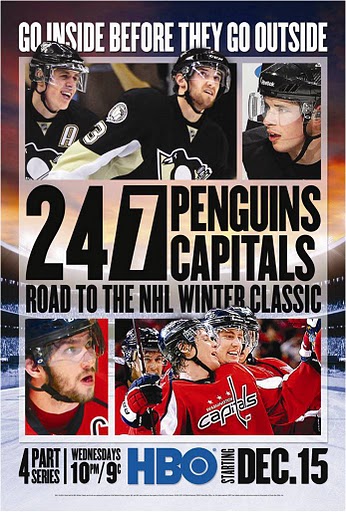 HBO’s critically acclaimed 24/7 series made its NHL debut in December 2010 and provided viewers with an all-access look into lives of players, the inner workings of a franchise, and two of the NHL’s top teams that season. Known for its lack of censorship and narration by Liev Schreiber, the series was renewed for each of the following events: Rangers-Flyers in 2012 and Leafs-Wings in 2014 (the planned 2013 series was canceled due to the lockout.)

Despite an overwhelmingly positive reception, the NHL announced the end of its partnership with HBO. No explanation was provided, yet the events of the 2014 Winter Classic likely played a role in HBO’s decision not to renew. Mike Babcock and Randy Carlyle both had HBO’s camera crews removed from their respective locker rooms during particularly tense moments, which ran counter to 24/7’s all-access philosophy.

Although 24/7 won’t return for the foreseeable future, the NHL named its unofficial replacement through a partner deal with Epix, a premium cable network. Interested viewers will have access to an eight-week trial period, during which they can view a total of eight NHL-centric episodes. The first four episodes will focus on the Capitals and Blackhawks in the weeks before the Winter Classic, while the remaining four are devoted to the San Jose Sharks and L.A. Kings, participants in the upcoming Stadium Series game.

The still-unnamed series won’t be a carbon copy of its predecessor, but fans can expect the same level of quality and content. 24/7’s influence is apparent, even in production. Former HBO producer Ross Greenburg will have a large role in the show’s development.

Apparel sales alone are a huge part of the Winter Classic’s continued success. The array of jerseys, shirseys, and toques are devoured by fans of the participating teams–even those who aren’t in attendance. Of course, tickets are the most sought-after commodity. Last year’s venue, Michigan Stadium in Ann Arbor, seated over 100,000. Holding just over 41,000, Nationals Park is minuscule by comparison. Fewer tickets available translates into greater demand, and in turn, higher prices.

Both the Capitals and Blackhawks have guaranteed their season-ticket holders purchasing access. Some will make a hefty profit in the secondary market by reselling through merchants like StubHub and Vivid Seats. In 2011, the average ticket sold for $489.11–a far cry from 2014’s $155.83. Pittsburgh’s proximity to Washington surely played a role; the two cities are roughly four hours apart by car. Chicago, on the other hand, is over 11 hours from Washington.

The selection of Nationals Park was lauded for its intimacy (small capacity) and connection to D.C., but it places a greater financial constraint on fans hoping to attend. The Capitals and Blackhawks have yet to announce the specifics of obtaining tickets, but they emphasize purchasing season tickets as a means of guaranteed access to initial sales. For those who aren’t season-ticket holders, history suggests that delaying your purchase will get you a better deal.

1. Return of the Throwback Jerseys

The Capitals’ Sep. 24 press event revealed additional details regarding the event, including their official 2015 sweaters. Monumental Network teased a number of first-look sneak peeks, which revealed the official patch and coloring of the jerseys.

Check out the 2015 #WinterClassic logo & watch a LIVE stream of the full jersey reveal @ 12:15 http://t.co/Z0gqEO41sO pic.twitter.com/H5QmXovLsX

The final product features an entirely new Capitals logo–white block lettering over a blue W. The jerseys themselves have laces and are largely red, with white stripes on the shoulders and hem. Three white stars are placed above the new logo to represent D.C., Maryland, and Virginia; the Washington Monument is hidden in the peak of the W.

Each design choice is a reflection of the Capitals’ history as they enter their 40th year in the NHL, as well as the history of hockey in Washington, D.C. Before the Capitals were a fixture in the league, a number of teams belonging to now-defunct leagues called Washington home.

Reactions to the jerseys were mixed, with some believing the iconography was incorporated tastefully. Others viewed the nods to D.C.’s hockey history as garish and overwhelming. The jerseys and accompanying merchandise are available for order through the NHL’s official online store, and the Blackhawks’ jerseys will be revealed at a later date.