The AHL’s Western Conference rules this week’s power rankings, holding three of the top five spots and five in the top 10. Meanwhile, some previously top teams struggled the past week, dropping their ranking, and the bottom group largely remains unchanged.

Read on to see where your favorite team ranks!

The Griffins finish the week on a seven-game winning streak highlighted by a 5-1 win over the Rochester Americans on Friday. Landon Ferraro scored two goals, while Petr Mrazek stopped 33 of 34 shots in net.

Texas came back from a rough performance last week to win all three of its games this week, but the victories were over struggling squads in Iowa and Oklahoma City. Colton Sceviour and Travis Morin rank second and third in the AHL in scoring with 30 and 29 points, respectively.

The Heat remain the best team in the AHL after going 2-0 this past week. Brett Olson had three assists in Saturday’s 5-2 win over the Rampage, while 2010 third-round pick Max Reinhart added two points.

Springfield lost to a hot Albany Devils team on Wednesday, but took both games of a home-and-home with the Hartford Wolf Pack to remain in the top five. However, defenseman Tim Erixon, who leads the Falcons with 16 points, was recalled to the Columbus Blue Jackets on Monday.

The Bulldogs find their way back to the top 10 after taking over the North Division lead with a 2-1 week. Gabriel Dumont had three points on Sunday to power Hamilton to a 6-2 victory over the Lake Erie Monsters.

The Devils continue one of their best seasons in several years, as they are on a three-game winning streak. They took out a dominant Springfield team on Wednesday before beating another Eastern Conference talent in Binghamton in a shootout on Saturday. Rookie Reid Boucher is sixth in the AHL with 10 goals.

Rockford split a set with a bottom-ranked Charlotte Checkers team and got three of four possible points. Garret Ross had two goals in Saturday’s 5-3 victory and is tied for third on the team with six goals.

The Penguins were trounced 5-0 by the IceCaps on Friday night, but rebounded on Saturday with a 3-0 win despite a depleted lineup. Brendan Mikkelson had two assists, and Jeff Deslauriers made 30 saves to put the Pens on the winning end of a shutout. 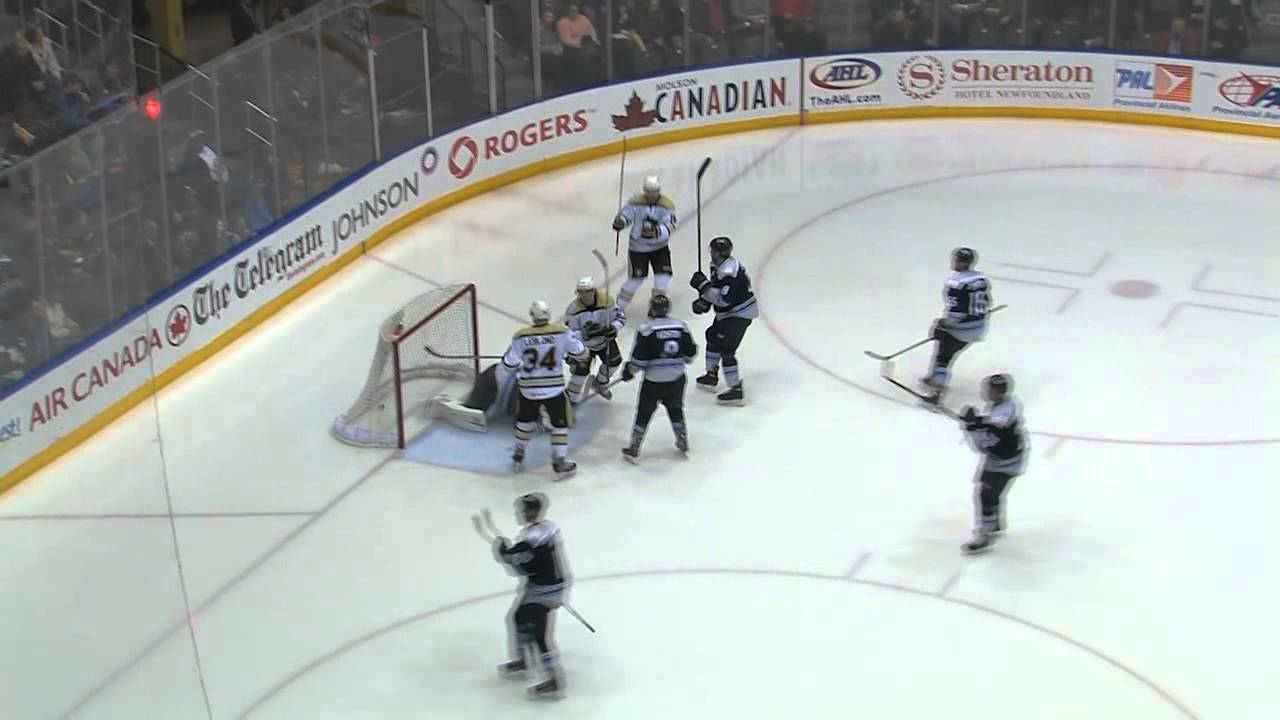 Lake Erie cracks the top 10 after winning two of its three games and improving to eighth place in a tight Western Conference. The Monsters held both the Bulldogs and Marlies to one goal apiece in their victories, and Colin Smith scored twice in Friday’s 4-1 victory over Hamilton.

The Phantoms started December with two wins, scoring three goals apiece. Cal Heeter made 24 saves in a 3-0 shutout victory over Hartford on Friday night. Jason Akeson is the team’s leading scorer with 17 points on the year.

The Sound Tigers, who looked bleak at the beginning of the year, have surged of late with a four-game winning streak. Ryan Strome repeated as AHL Player of the Week with eight points in three games and currently leads the league with 24 assists 33 points.

The Monarchs struggled this week with a 7-2 loss to the Bruins on Friday and a 2-1 shootout loss to the Worcester Sharks on Sunday. However, they were on the winning end of the shootout on Saturday, 4-3, over the Portland Pirates. Zach O’Brien had two goals in regulation before scoring the winner in the skills competition.

Matt Fraser had a hat trick in Friday’s victory over Manchester, while defenseman David Warsofsky also had three points. However, the rest of the weekend consisted of a shootout with Worcester and a loss to Portland. Fraser and Ryan Spooner, the Bruins’ top two scorers, were recently recalled to Boston.

The Admirals took two games from the Syracuse Crunch, the team they switched affiliations with after their 2012 Calder Cup season. Goalie Brad Thiessen, who recently signed with Norfolk, stopped all nine shots he faced in relief of top prospect John Gibson in Friday’s 4-3 shootout win.

The Senators have lost their last three games, but picked up two points by way of going to the shootout. Mike Hoffman is fifth in the league with 26 points, while Cody Ceci is tied for the same position among defensemen with 16 points.

The IceCaps beat the Penguins 5-0 on Friday with two goals from Carl Klingberg and 20 saves from goalie Eddie Pasquale, but the Pens again got revenge in the second game with a 3-0 win. A home set with a faltering Crunch team awaits before the IceCaps hit the road for five games.

Upcoming Schedule: Tuesday and Wednesday vs. Syracuse, Saturday at Hamilton, Sunday at Toronto

Milwaukee beat Oklahoma City 5-2 on Thursday in its only game of the week. Taylor Beck and Colton Sissons each had two points, while Scott Darling made 28 saves to improve to 3-0 in six games with the Admirals.

The Sharks started a three-in-three on Friday by blasting the Pirates 8-2. Matt Nieto led the way with five points, while Daniil Tarasov and Freddie Hamilton each had three points. Tarasov then added an assist and a shootout goal in Sunday’s 2-1 victory over the Monarchs.

Rochester was held to two goals in two games by Grand Rapids over the weekend and have lost three of its last four games. Phil Varone is tied for seventh in the AHL with 24 points, while Brayden McNabb is one of three league defensemen with 15 points.

Chicago split a set with Oklahoma City this weekend and were led by Ty Rattie (two goals) and Corey Locke (three assists) in Sunday’s 5-4 shootout win. Locke is tied for sixth in the AHL with 14 assists. The Wolves will travel for their next three games, and difficult opponents in the Griffins and Stars await them.

After winning two games at the end of November, the Crunch dropped two games to Norfolk to start December. Nikita Kucherov ranks second among league rookies with 24 points and is also tied for fourth with 13 goals.

The Pirates snapped a five-game losing streak on Sunday with a 4-2 victory over the Bruins. Andy Miele and Mathieu Brisebois each had two points, and Miele remains the team’s leading scorer with 16 points.

The Barons dropped two of three games this weekend, but won 5-2 over the Wolves on Saturday. Roman Horak scored twice, while Ty Rimmer made 39 stops on 41 shots in goal. They will start the week hoping to get revenge on Milwaukee after a 5-2 loss on Friday.

Upcoming Schedule: Thursday at Milwaukee, Friday and Saturday at Rockford

The Marlies went 0-2 this week and dropped to seventh place in the conference, showing there is no room for error in the West. T.J. Brennan and Spencer Abbott rank in the top 10 in the league in scoring with 23 and 22 points, respectively.

The Bears appeared to be getting going with a 4-2 win over the Sens on Friday, but couldn’t overcome Bridgeport on Saturday. Casey Wellman and Jeff Taffe are tied for the team scoring lead with 13 points for an inconsistent Hershey team.

Iowa lost two games against Texas this weekend, but took a point in Saturday’s 2-1 overtime loss. Brett Bulmer scored both goals for the Wild on Friday as they fell 4-2.

Upcoming Schedule: Wednesday and Thursday at Abbotsford, Sunday vs. Rockford

Zach Boychuk scored twice and Chris Terry and Brett Sutter each had two assists to give the Checkers a 3-2 overtime win over the IceHogs on Thursday. But Charlotte lost 5-3 on Saturday, the second week in a row it has split a two-game set. The Checkers are in the middle of a 10-game home stand and have to use that to their advantage to turn things around.

The Rampage are losers in their last four, only picking up a point against the Wild in a 5-4 shootout loss on Wednesday. Vincent Trocheck is tied for fifth with 11 goals and holds the team scoring lead with 21 points.

Upcoming Schedule: Tuesday and Thursday at Charlotte, Saturday vs. Chicago, Sunday vs. Texas

The Comets have lost three straight games since winning three out of four in late November. Benn Ferriero had a three-point night on Friday, but it wasn’t enough to get past the Sound Tigers. He is first on Utica with nine goals, while Pascal Pelletier has contributed 18 points to help the offense.

Hartford’s hot start to the season seems like a long time ago, as it is now last in the Eastern Conference and has lost five consecutive games. Aaron Johnson is fourth among all defensemen with 17 points, while rookie Danny Kristo has stepped up to lead the Wolf Pack with 10 goals and 18 points.