The St. Louis Blues are currently in 1st place in the tough Central Division, and 2nd overall in the Western Conference behind the high octane Anaheim Ducks.  The Notes team seems to have found a way to win this season that has not been present in years past.  Does this mean the Blues will be able to make a true Stanley Cup playoff run? Or will the grueling end of the year schedule take its toll on the team before the playoffs even begin?

NHL Scheduling is NOT the Blues Friend

It seems like year after year Blues fans get their hopes up throughout the season just to have them dashed rather quickly come Stanley Cup playoff time, regardless of the coaching staff or the team on the ice.  Why is this so ever present?  Simply because the Blues are a small market team, and the NHL schedule makes it so.  The St. Louis Blues are almost always among the teams with the fewest games played heading into the last third of the season, meaning they get less rest than every other team over that last third, a statistic that has a very real explanation.

Each spring the Missouri Valley Conference Championship basketball tournament and a Regional Final for March Madness are held at Scottrade Center where the Blues call home.  This means that as the season is winding down, and the Blues are playing catch up (in terms of games played), they are forced to be on the road more than the team is used to (which we all know spells trouble for the club).  This leads to more fatigued players who make more mistakes, and take more risks per game than normal to try and make up for their burning lungs and legs.  In turn, the team experiences harder grinded out games than usual, and more injuries than other teams around the league throughout this pivotal time frame leading up to the Stanley Cup playoffs. 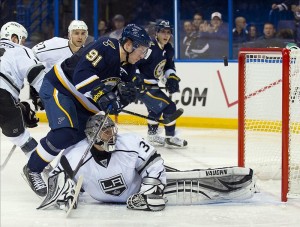 Hardnosed Hockey and a Tough Schedule Mix Like Oil & Water

The Blues focus on a hard hitting, in-your-face style of play that wears teams out and allows offensive snipers such as Alexander Steen and Vladimir Tarasenko to take advantage of open ice to score, and win games.  However, when the scheduling puts you in such a precarious position, this task seems insurmountable.  I’m not saying the Blues should be given a free pass to slack off, but the lack of resting days, and the physical play on the road really takes its toll on their bodies.  This means that once the playoffs finally arrive, the Notes team is not nearly as fresh as their opponents, making it almost impossible to get through the tough rigors of the Western Conference Stanley Cup playoffs.

The Blues may have found their recipe for success this season, although time will tell all.  This season the Blues haven’t been “the Blues” of past years, where missed opportunities and questionable in-play decisions lead to losses in big games.  Coach Ken Hitchcock and on ice leader/team captain David Backes seem to have the group under control, and with more veteran leadership than ever before this could be the year the Blues break their playoff curse.  If you then consider the depth of the team this year you can begin to see the light at the end of the schedule.

The Blues have had the best start to a season in team history, and have continued their torrid pace through the Sochi Olympics break using a wide range of players in various roles, including stars Patrik Berglund and Chris Stewart, and budding star Magnus Paajarvi.  They have been able to call up Chris Porter, Dimitri Jaskin, and Adam Cracknell as needed to fill gaps on all 4 lines, and have been able to find ways to win in close games this season.

The team play has produced more balanced scoring than in year’s past, with 13 Blues surpassing the 20 point plateau, and a total of 20 players with at least 5 points.  When you look at the team’s goal differential (plus-1 per game) it becomes clear that this team has a different formula than its predecessors, and may just be the right mix to bring the storied franchise back to the Stanley Cup Finals in 2014. The real question is will the Sochi Olympics break be a blessing or a curse for this team’s ultimate hopes of raising the Stanley Cup in June?

“@Kirkman As the Olympics begin, take a look back at past @StLouisBlues Olympians http://t.co/ZfLhCXzxml @jprutherford @Jonssonville”

With 9 players, a coach, and the GM actively participating in the Olympics this year the Blues may have some extra fatigue to work through for sure.  It’s a good thing Head Coach Ken Hitchcock runs one of the most rigorous training camps, because it may just be that preparation that carries the Blues through the Olympic break and deep into the playoffs this season.  However, if history has anything to say about it, the Blues will have quite the battle post Sochi.

Historically teams with the highest number of Olympic participants have abysmal years afterwards due to over-celebration, disappointment, injuries, fatigue, or a mixture of all 4.  If the Notes are to reach their ultimate goal and give the faithful city of St. Louis a Stanley Cup, they will have to truly bear down and get back to work as soon as the Sochi break ends.  It may not be an easy task by any means, but if any Blues team can handle it, this year’s team can.  Seemingly with all of the right tools in place, I think the Sochi Olympics break and the end of the year schedule will be blips on the radar to a dominant team prepared for their true test that lies ahead.