Hired by the Los Angeles Kings in 1973 to replace the departed Roy Storey, Miller has been the Kings’ play-by-play broadcaster for the past 41 years. I’ll say it again: forty-one years. To put it in historical perspective, Miller has been working for the Kings since before Richard Nixon resigned the presidency, before the Iran hostage crisis, even before disco sprang into being. Except for possibly a few checkered coats and pairs of bell-bottom pants, Bob’s focus was squarely on hockey, not pop culture.

During much of Bob Miller’s tenure, the Kings just weren’t a good hockey team. Initially, there was promise, as the team finished .500 or better during his first four seasons, even earning 105 points in 1974-75 — a franchise record to this day. However, despite the advent of the Triple Crown Line in 1979, the 80s saw mostly poor hockey coming out of Los Angeles. A noteworthy exception was 1982’s “Miracle on Manchester” game three (and ultimately, the series) victory over the heavily-favored Edmonton Oilers.

1988, of course, was the year of the trade, which eventually led to the Kings’ first Finals appearance in 1993. Immediately after that, though, the team returned once again to its flailing ways. Other than an uptick during the late 90s/early 2000s, the franchise remained grounded until the current Dean Lombardi era, where in a stunningly short period of time, Los Angeles has gone from also-ran to possible dynasty in the making.

Miller has a mantle filled with awards

Bob Miller is truly a living legend of hockey, and not just in Los Angeles. In 2000, he was bestowed the Foster Hewitt Memorial Award by the Hockey Hall of Fame which gives the award “in recognition of members of the radio and television industry who made outstanding contributions to their profession and the game during their career in hockey broadcasting.” He has subsequently been inducted into the Wisconsin Hockey Hall of Fame, the Southern California Sports Broadcasters Hall of Fame, and the Los Angeles Kings Hall of Fame.

In 2006, Miller received a star on the Hollywood Walk of Fame, on the same block as Bing Crosby, Charlie Chaplin, Hanna-Barbara Productions, Milton Berle and B.B. King. Fittingly, it is a mere four stars away from legendary Lakers broadcaster Chick Hearn, who was instrumental in getting Miller the job. In his own words:

“They asked me where I would like it to be and I said I would like it to be as close to Chick Hearn as possible because he was instrumental in getting me this job. Chick recommended me twice for the job. In 1972, I didn’t get it but the second time I did. He was a dear friend, a great broadcaster, a Hall-of-Famer and I wanted to be as close as possible. So they got me four stars away from Chick.”

My brief experience with Bob Miller

I’m proud to say that I’ve met Bob Miller. Last January, I flew to Los Angeles to cover the Stadium Series game between the Kings and the Ducks. It was a tremendous experience, made even more so by being introduced to Bob the day before the game. He shook my hand, looked me squarely in the eyes and patiently listened to me stammer out how honored I was to meet him. That was no line — I used to listen to Kings games on my red transistor radio back when I was a kid living in L.A. in the mid-1970s. I felt as if I were in the presence of royalty. From a broadcasting and hockey perspective, I was.

The next day, I saw him again, and he made a point to say hello to me in the media lunchroom. Me, a nobody, being shown respect by one of the game’s greatest voices.

Some of the great Bob Miller calls

And now, the fun part. There are probably many of you who have never had the pleasure of listening to Bob Miller call hockey games. Luckily, the internet is replete with examples, and no piece about one of the greatest broadcasters in all of sports would be complete without showing a few of them.

The Kings eliminate the Flames in the 1990 Smythe Division semifinals

For only the fifth time in franchise history to that point, the Kings won a first-round series, this time 4-2 over the Calgary Flames. The moment is particularly dramatic given that the game had gone into overtime:

Annoying, superimposed music notwithstanding, it’s a great example of how Bob Miller brings the action to life over the airwaves.

Amazing comeback against the Dallas Stars

Down 4-0 with about 7 1/2 minutes left in the game, the Kings mounted an incredible comeback at home against Marty Turco and the Dallas Stars on November 10, 2007. After scoring five goals in just 5:07, Los Angeles set a club record for the fastest five goals in franchise history. You can hear the excitement welling in Miller’s voice each time the lamp is lit:

Jim Fox did a fine job on the broadcast as well.

The Frenzy on Figueroa

After losing the first two games of their 2001 playoff series against the heavily-favored Detroit Red Wings, the Kings won game three 2-1 at the Staples Center. That set the stage for game four, which saw Detroit build a 3-0 lead after two periods, only to witness the ‘Frenzy on Figueroa’:

Los Angeles ended up winning the series in improbable fashion, 4-2.

The Miracle on Manchester

There was no way Los Angeles could defeat the Gretzky-led Edmonton Oilers in the opening round of the 1982 playoffs. L.A. somehow slunk into the playoffs despite a 24-41-15 record, while Edmonton captured the Smythe division with a 48-17-15 record. But the hockey gods have a sense of irony, and courtesy of the ‘Miracle on Manchester’, that’s exactly what happened: 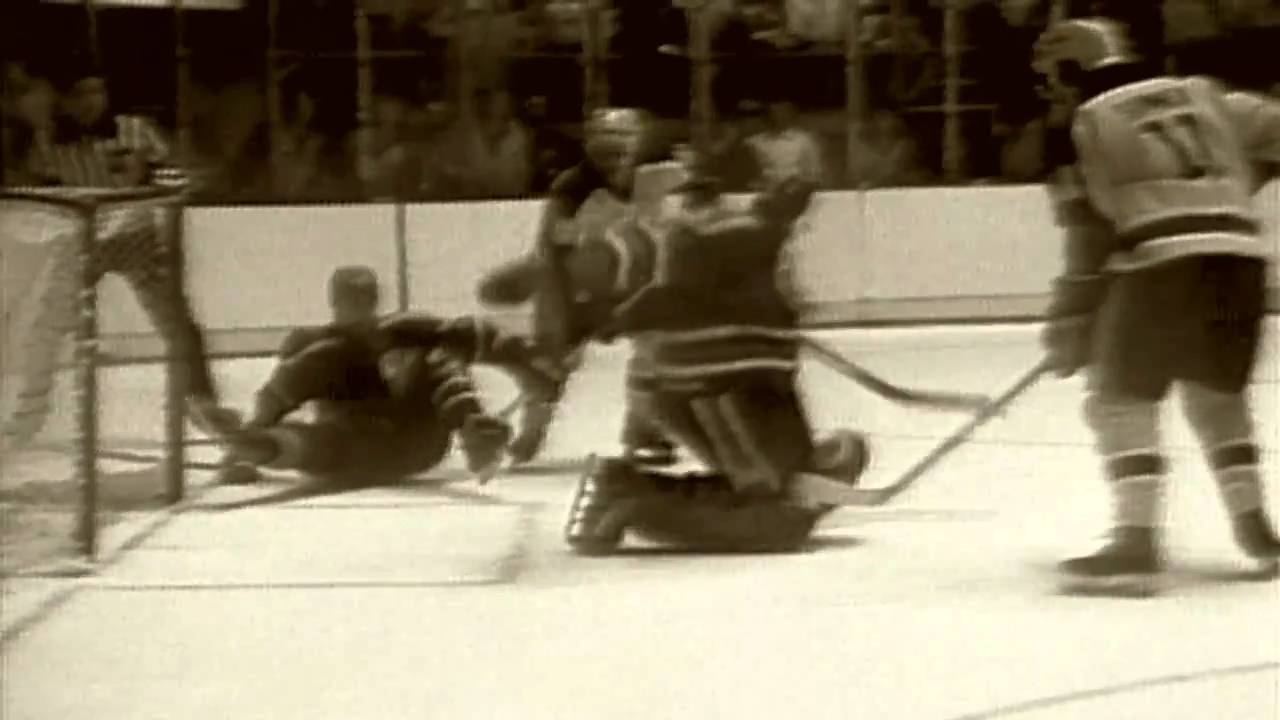 No recap would be complete without Bob Miller’s call of the series-clinching final minute of the Kings/Devils game. Unable to do so over the airwaves due to NBC’s contract with the NHL, it was instead piped over the Staples Center P.A. system in front of a roaring crowd. After 39 years of broadcasting Los Angeles Kings hockey, Miller was rewarded with seeing his team finally claim hockey’s biggest prize: 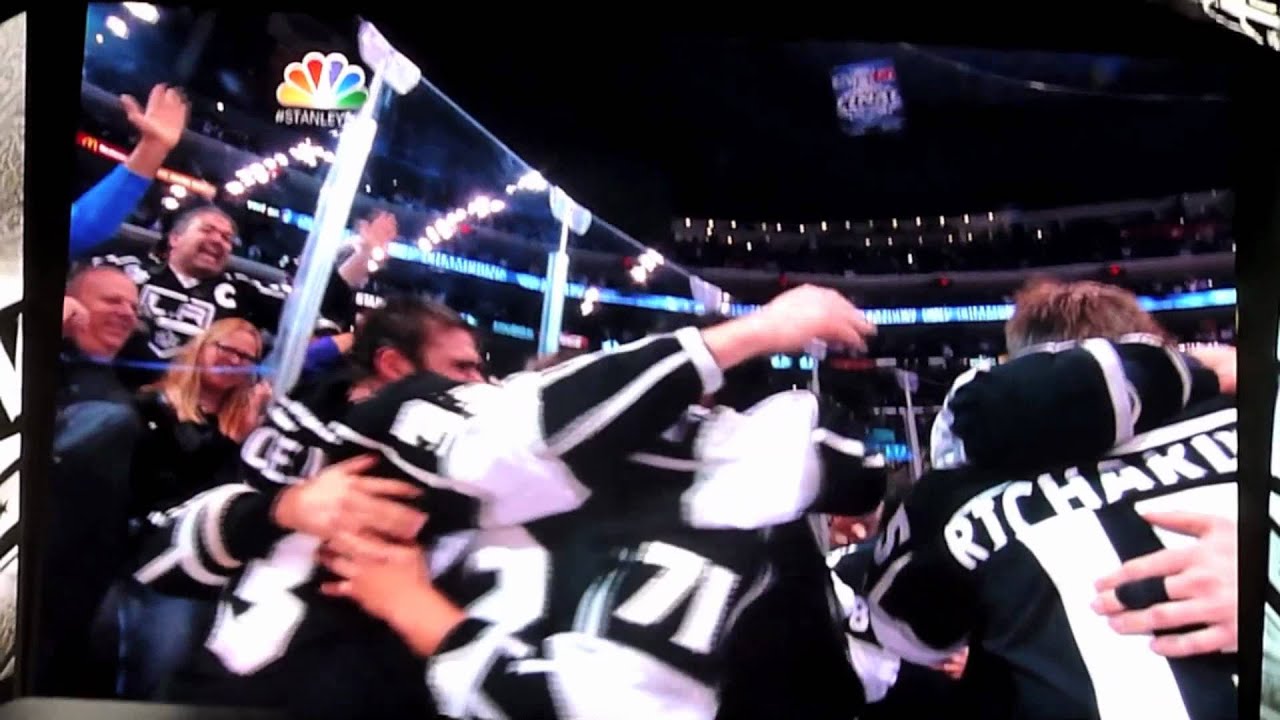 Congratulations on an unbelievable 41 years, Bob. Here’s to 41 more.