Bobby Ryan wants out of the Anaheim Ducks organization. At least that’s what he said this summer in an interview with Randy Miller of the Courier-Post. Ryan stated:

“Anaheim has been a team over the past year that really has shown me nothing to prove that they want me here…every time they look to add a piece to the puzzle, I’m the piece going the other way.”

“Move me… It’s just tough going to the rink every day knowing that if something goes wrong, you’re going to be the guy moved.”

These are the words of a 25-year-old who has grown weary of constantly being mentioned in trade rumours and fearing that any day could be his last as a member of the Ducks. It’s no secret that last season was an abysmal one for the Ducks, and many were calling for significant changes in the organization. Head coach Randy Carlyle was fired, and many speculated that one of the Ducks’ top forwards would be traded. Some of the rumours focused on captain and first-line centre Ryan Getzlaf, but most of the trade talk centered on Ryan. It’s something Ryan was questioned about all season long; the talk picking up momentum the more the Ducks struggled.

While Ryan’s off-the-cuff trade demand was made publicly, one has to wonder how sincere it was. The season was incredibly frustrating for Ryan who, although notched 31 goals, tied a career low in total points for a full season in the NHL with 57. In 82 games this year, he had as many points as he did in 2008/2009 when he played only 64 games. However, Ryan was not by any means the sole reason the Ducks had a miserable season. Ryan Getzlaf struggled immensely, and Corey Perry totalled only 60 points, compared to the 98 from the previous year in which he won the Hart Trophy as the league’s MVP.

So why was it then that Bobby Ryan was the one constantly on the trading block? Well, his price tag ($5.1 million cap hit) made him a more attractive option than Ryan Getzlaf ($5.7 million cap hit), and he is signed through the 2014/2015 season, while Getzlaf and Perry are UFAs at the end of the coming season and will no doubt demand significant pay increases. Additionally, he is only 25, compared to Getzlaf, 27, and Perry, also 27. Ryan has scored at least 31 goals in every full season he’s played in the NHL. He has the potential to become a consistent 40-goal-scorer as he has yet to hit his prime.

So Trade Him, Right?

When a player demands to be traded, it is usually in the team’s best interest to do so. Even though the player may act cordial as he patiently anticipates a trade, as can be seen in Vancouver, where Roberto Luongo patiently awaits to be moved, if he has demanded to be moved, the GM should move him before the relationship sours. In extreme cases, teams have not been able to find a suitor to move the player, and have sent the player down to the minors, as was seen when Sheldon Souray requested a trade from the Edmonton Oilers. Often, though, when a player demands to be traded publicly, the team isn’t able to get fair market value in return, as teams are able to sit patiently and wait for the price to be lowered. This seems to be the case regarding Roberto Luongo, Rick Nash, and Bobby Ryan.

So is it in the Anaheim Ducks’ best interest to trade Ryan, when other teams anticipate the price to drop? The Ducks were on the benefiting side of such a

situation in 2006, when Chris Pronger demanded a trade from the Edmonton Oilers. Oilers then general manager Kevin Lowe frantically sought fair value for the franchise defenseman, but was forced to trade Pronger to the Ducks for what many believed to be less than market value. The Ducks sent Joffrey Lupul, Ladislav Smid, and three draft picks to the Oilers. (At the time this was viewed as less than market value – Lupul ended up being a major bust with the Oilers and Smid took a few years to develop. The pick from the Ducks ended up being Jordan Eberle, and Smid is now a mainstay on the Oilers blue line. Now, years later, the trade might be viewed more fairly.)

The Ducks essentially have two options: 1) Trade Ryan and hope to get the most value for him as they can, possibly by creating a bidding war – something made increasingly complicated by having other big name forwards still available via trade or free agency (i.e. Nash, Doan, Semin), or 2) keep Ryan a member of the Ducks. If Anaheim chooses option 2, it would require seriously mending the bridge that has been burned. It was no secret that the Ducks were and have been listening to offers on Ryan, and he, in return, let it be known that he would prefer to be moved. But if Ducks general manager Bob Murray sits Ryan and his camp down and explains that they have no intention of moving him this season and guarantees to him that they won’t, it’s possible that Ryan could still be a major part of the Ducks’ future. Maybe Ryan won’t believe them, and maybe the wounds of betrayal are too deep in his mind. Ryan may have already decided that there is no way he will return to the Ducks. But the option is there for the Anaheim management to repair the ties with Ryan and have him stay a part of the team. 25-year-old 30-goal-scorers don’t come easily, after all.

However, if the Ducks do decide it’s time to part ways with Ryan and send him to another team, let’s look at some of their options.

Many are stating that the Philadelphia Flyers and New York Rangers are the front runners to get Bobby Ryan. Ryan was born in New Jersey so would likely welcome a trade to the eastern coast. His father, after all, thinks that the Flyers are the “best that there is.” Let’s look at the possibilities of where Ryan could land and what each team could possibly offer to get the young forward.

The Flyers are considered the major front runner for Bobby Ryan, but what are they willing to give up? The Ducks are allegedly looking to get a second-line centre and more for Ryan, so it’s likely the Ducks would require Sean Couturier to be coming back the other way. The Flyers highly value Couturier (who wouldn’t), but do they value Ryan more? Couturier had a terrific season last year, and showed his versatility in all aspects of the game. The Flyers have plenty of young talent, and are looking to fill the void on the wings left by the departure of Jaromir Jagr. How many goals could Ryan put up playing on a line with Claude Giroux?

The Rangers also have a plethora of young talent, but are unlikely to part with budding stars like Derek Stepan and Chris Kreider. Would they be willing to part with Michael Del Zotto, Brandon Dubinsky, or Carl Hagelin? Additionally, the Rangers are said to be gunning for Rick Nash, with Ryan likely being plan B. If they do somehow manage to appease Columbus GM Scott Howson’s demands and get Nash, Ryan will not become a Ranger.

Pittsburgh Penguins
How potent would an offensive line featuring Bobby Ryan playing with Sidney Crosby or Evegni Malkin be? A powerplay featuring Ryan, Crosby, Malkin, Neal, and Letang would no doubt become the most feared in the league. But what would the Penguins be willing to send to Anaheim? It’s unlikely Pittsburgh would send young center Brandon Sutter to the Ducks, after receiving him in this summer’s blockbuster trade that sent Jordan Staal to the Carolina Hurricanes. It’s doubtful that prospects like Eric Tangradi, Beau Bennett, or Simon Despres would be enough to get Ryan out of Anaheim.

Toronto Maple Leafs
Whenever a top player’s name comes up in trade rumours, the Leafs always seem to be in the mix. However, Toronto doesn’t seem to have much that they would be willing to offer to Anaheim to get Bobby Ryan. Nazem Kadri would not be enough to get the deal done, and Toronto already traded Luke Schenn to the Flyers for James van Riemsdyk. James Gardiner is a non-starter in trade talks, so it’s unlikely that Ryan ends up in Toronto. However, Toronto does have as its GM a guy named Brian Burke, so it’s always possible.

San Jose Sharks
The Sharks are known to be going after Rick Nash (at least, they are on Rick Nash’s trade list) and are looking to shake up their offensive units. If they can’t land him, would they look at Bobby Ryan as plan B? If so, would the Ducks trade within their own division? Logan Couture is not going anywhere, and outside of him (and possibly Joe Pavelski), there isn’t much that the Sharks could offer to entice the Ducks to send Ryan just up the coast to San Jose.

There are several other teams that would surely have interest in Bobby Ryan. Teams such as the Ottawa Senators would love to have additional scoring. Ryan is young and talented and would be a great match with the Senators. However, it’s not likely that the Ducks would be willing to take back mainly prospects for a star like Ryan. Anaheim is unwilling to go into a full-on rebuild, and why would they trade a star for someone who could potentially be a star?

The Carolina Hurricanes have done a lot to bolster their roster already this off-season and apparently aren’t done yet. They could make a run at Ryan, but having already traded highly-touted young forward Brandon Sutter to the Pens, there’s not much left that the Canes would be willing to part with. They certainly won’t trade Jeff Skinner, and it appears Carolina is preparing itself to be a serious contender in the East. While Ryan would certainly help this cause, there aren’t many current roster players the Hurricanes would be willing to give up for him.

Whether Bobby Ryan starts the 2012/2013 season as a member of the Anaheim Ducks or another team remains to be seen. The Ducks have options in terms of which course they will take with him, but their best choice might be to keep him and mend the relationship. Young stars who can put the puck in the back of the net are hard to come by. But whichever team has Ryan on their starting roster at the start of the upcoming season can expect plenty of this over the next few years: 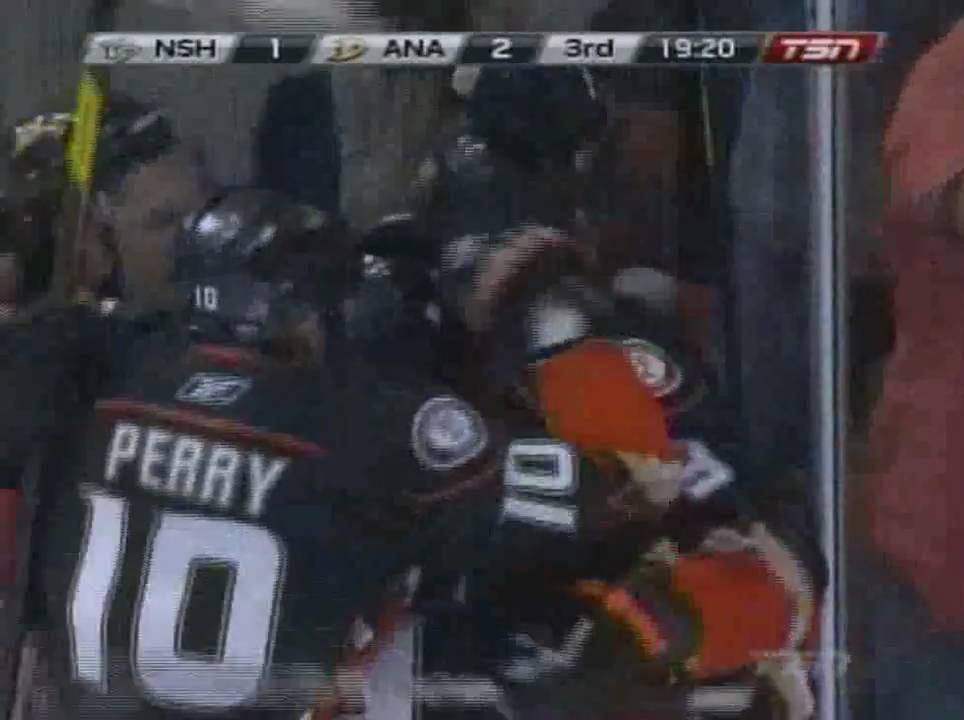 Dave Champion is a contributor at The Hockey Writers covering the Anaheim Ducks as well as NHL news and opinion. He is currently studying Political Science at the University of Alberta. Growing up in Edmonton, his love of the game developed at a young age – a love that has grown steadily since. Check out his hockey blog “Champ’s Thoughts” at thenhlupdates.wordpress.com
Follow him on Twitter @Champion_Dave