Over the course of their league-best 19-game point streak, which ended Sunday night in Pittsburgh, much came to light regarding the identity of the Boston Bruins. A deeper and more balanced lineup, an infectious character from top to bottom and, most notably, an ever-increasing sense of resiliency were ticked off the checklist over the 15-0-4 stretch that dated back to Jan. 29.

Whether for better or for worse, their historic hot streak has all but cemented an all too familiar route Boston must take, come the postseason. Should they again defeat the Toronto Maple Leafs in a likely Eastern Conference quarterfinals rematch, the Bruins could very well have the chance to avenge last season’s semifinal loss to the Tampa Bay Lightning. 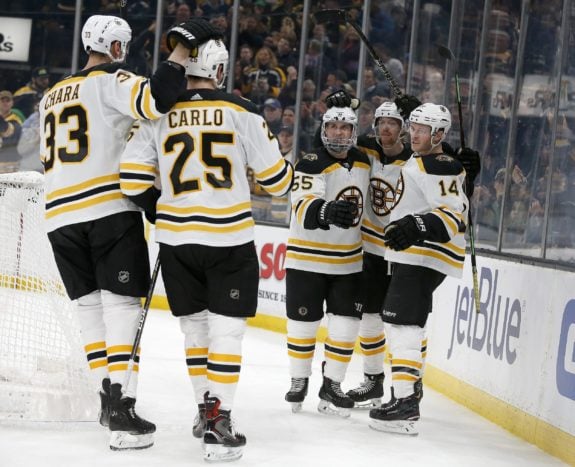 A league-best 19-game point streak saw the Bruins truly come together as a team, ahead of the Stanley Cup playoffs. (AP Photo/Mary Schwalm)

With the B’s hitting their stride as the end of the regular season approaches, here’s a look at how each of these intangibles of identity could lead to a deeper run in the Stanley Cup playoffs.

Brilliance in Back-To-Backs Has Buoyed Bruins

Up until and three times throughout their streak, Boston has demonstrated a lesser acclaimed trait of a true Stanley Cup contender, the ability to pick up points on both ends of back-to-back games. In 2018-19, the league average is 12.9 back-to-backs per team, a number recently surpassed by the Black & Gold who have thrived in 13 of them to date.

For a second consecutive season, the Bruins have 16-plus wins within their 14 back-to-backs, totaling 28 games and 34 percent of their schedule, a far cry from their performance over 2016-17. A year ago, they finished at 16-9-3 under similar rigors, leading to a second place finish in the Atlantic Division and home-ice advantage in the first round, a feat poised to be repeated this April.

David Pastrnak and the Bruins’ success in back-to-backs helped them finish second in the division last season, earning home-ice advantage against the Toronto Maple Leafs in the Eastern Conference Quarterfinals. (Maddie Meyer/Getty Images)

Considered by many as true character builders, back-to-backs can prove crucial towards a team’s playoff implications. Boston started out 1-2-1 under such circumstances before utterly dominating three back-to-backs in November, to the tune of a 5-0-1 record. In the two days after Thanksgiving, the B’s earned their first of five sweeps before a 3-1 divisional mark and a split before Christmas.

Resiliency Could Raise Bruins in Playoffs

Since the holidays, the Bruins have bagged 15 of a possible 20 points on consecutive game days, including two sweeps amidst their point streak. Highlighted among them were victories over the Anaheim Ducks and Los Angeles Kings on their annual West Coast swing, the team’s most recent back-to-back until a split this past weekend. 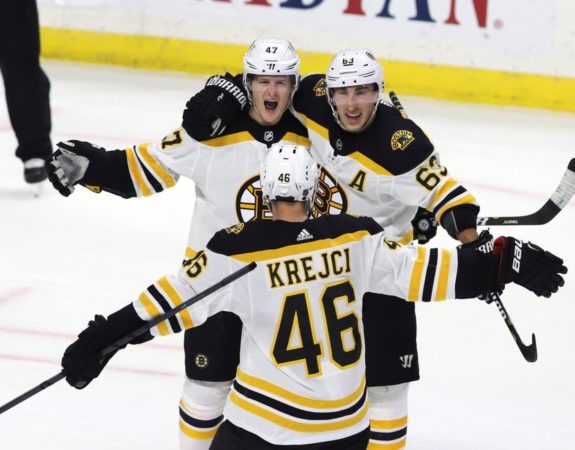 While no qualifying team will need to worry about a back-to-back come the postseason, the Bruins can take solace in knowing their ability to perform at a high level despite a quick turnaround.

In theory, general manager Don Sweeney’s additions prior to the trading deadline could, in a sense, disrupt chemistry. However, the recent additions of forwards Charlie Coyle and Marcus Johansson into the B’s lineup has only strengthened their bond. For proof, look no further than David Backes, who has accepted a new role in order to stay in the lineup on a nightly basis.

Even without the services of David Pastrnak, who remains sidelined after surgery on his left thumb, Boston’s depth has paid dividends. Danton Heinen has filled in quite admirably on the top line, alongside Patrice Bergeron and Brad Marchand, with a goal and 12 assists in Pastrnak’s absence. The energy line of Noel Acciari, Sean Kuraly and Chris Wagner has been a total revelation.

In the absence of David Pastrnak, Danton Heinen has come into his own on the Bruins’ top line, alongside Patrice Bergeron and Brad Marchand. (Amy Irvin/The Hockey Writers)

Lines two and three, however, remain in flux, with Johansson and Jake DeBrusk joining Pastrnak on the shelf. David Krejci’s resurgent season should benefit the most from any or all of the returns, while Coyle could prosper without a carousel of wingers. With both Kevan Miller and Matt Grzelcyk ailing along the blue line, the injury bug seems the only thorn in the side of the Black & Gold.

Bruins Piecing It All Together at Right Time

So what does all of this mean for the Bruins? A convincing answer might be difficult to determine until their roster is submitted ahead of Game 1 in the opening round. What is set in stone is a club capable of rolling out four dangerous lines that will fight, literally, until the final horn, as they did in final-minute wins over the Florida Panthers (7.2 seconds remaining) and Ottawa Senators (44.7).

That’s the kind of team that can make a legitimate run at the Stanley Cup.