The Boston Bruins own a deep and talented prospect system. In the following rankings, I’ve listed the more than thirty Calder-eligible young men under contract or control of the Bruins’ organization. In part-three, I’ll count down the Bruins twentieth through eleventh-ranked prospects.

Because of the system’s depth, I split the rankings into five parts:

Unlike some prospect-rankers, I don’t value all prospects equally. While I rate excellent defensemen and goaltenders as slightly more valuable than their forward counterparts, they’re significantly more risky (and goaltenders more so than blueliners). Consequentially, these players are devalued slightly in my rankings.

However, risk (and NHL-readiness) are small pieces of the puzzle compared to ‘upside’. I hold ‘upside’ in the highest regard – enough to diminish all but the greatest risk. For example:

Additionally, I include my “Current Favorable Projection” (CFP) for each prospect (where I expect them to land should their career advance positively); an Estimated Time of Arrival (ETA) for significant NHL action under the same circumstances; and other rankings for the prospects.

Cunningham was drafted as an overager thanks to impressive scoring numbers in his second draft-eligible season. He’s a solid playmaker with decent grit and the potential to develop into a solid two-way presence at the next level. His skating (more shifty than fast) and size won’t win awards but his vision, hands and competitive fire are all worthy of acclaim. He could grow into a solid secondary-scorer.

With an incoming infusion of forward talents from the OHL, Cunningham may lose minutes – but see a net improvement in his linemates’ skill-level. Hopefully, a breakout AHL campaign for Cunningham won’t be far behind.

The last vestige of the Bruins 2007 Draft-Class, Cross captained the Boston College Eagles to the 2012 NCAA Championship. After four years in Chestnut Hill which included another national championship and 60 points in 134 games, Cross should suit up for Providence in the fall.

Cross plays a simple north-south defensive game with a physical edge. He possesses an above-average point-shot but must continue develop his transition and puck-possession games. His future as a special-teams contributor will likely remain limited to penalty-killing. He’s faced some serious knee injuries and the organization takes a collective ‘deep breath’ any time he hits a rut in the ice.

While his overall upside is somewhat limited, Cross remains an intriguing prospect. Like many Providence-bound blueliners, Cross will have to fight for minutes – and may even see a trip to S.C. Still, expect him to finish the year in Rhode Island as a much-improved defender. 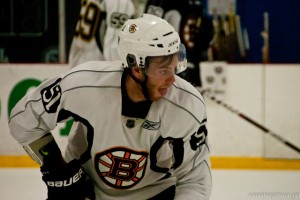 Bruins prospect-watchers were pleased with the standout performance of OHL winger Camara at the B’s Development Camp last summer. Initially pegged as an ‘energy player’, Camara showed solid skating, puck-skills and his usual potent physical game in his brief visit to Ristusccia Arena; leaving observers predicting a breakout campaign back in Saginaw. His offensive numbers nearly doubled across the board (16-17-33), but many had higher hopes.

Of course, setting personal bests while playing for two different teams (he was traded mid-season to Barrie) is no small feat. Rather, it may force a re-evaluation his development curve. On his energy/pugilistic game alone Camara possesses NHL potential. He’s one tough hombre and more than willing to throw his weight – and fists – around. If his offensive growth keeps pace, a third-line opportunity could follow.

Camara is playing on a line with Winnipeg top-prospect Mark Scheifele and should see his numbers bounce significantly yet again in ’12-’13. He started the season with a hat-trick on opening night to boot. Continued offensive improvement will only help his stock. 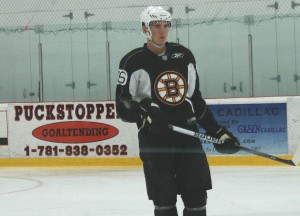 The big, extra-mobile defenseman completed his senior season with Milton Academy this past spring. While the Mustangs were unable to repeat 2010-11’s New England championship, O’Gara continued to develop, setting personal bests in goals, assists and points (5-20-25) in Milton’s 24-game season.

O’Gara turned heads with his performances at the past two development camps despite being one of the youngest and least experienced participants. He doesn’t project as a plus-offensive player at the NHL level, but he has the chops to be a competent two-way defenseman. With his outstanding size (6’3), intelligence and excellent skating chops, he may be the Bruins’ highest-upside defenseman after Hamilton.

The problem comes with his path – which is unconventional to say the least: He heads from prep school to the somewhat less-than ‘pro-pipeline’ of Yale. He probably won’t be destined for the pro ranks anytime soon. Consequently, he’s not ready for my top-fifteen quite yet.

Hutchinson – a third-round selection in ’08 – overcame whispers of ‘inconsistency’ to fuel a sterling 2011-12 campaign. Hutch’s numbers tell the tale: In 29 games as Anton Khudobin’s backup in Providence, the second-year pro posted three shutouts, a 2.36 GAA and a stratospheric .927 Sv%.

Hutchinson was plagued by inconsistency issues early in his career but has superlative size and a solid all-around technical and athletic game. He has all the pieces to earn a NHL job, but another full year of solid AHL action is a must.

This season, he’ll battle the newly-acquired Svedberg for starting duties at the Dunk. If he’s able to mirror last season’s totals with expanded icetime, the B’s may come calling in ’13-’14 with Anton Khudobin’s expiring contract.

The B’s acquired Svedberg in May, following his outstanding performance leading Brynas to the Elitserien championship this past spring. After several solid but nevertheless unspectacular seasons in the SEL, Svedberg broke out in the playoffs, posting a 1.70 GAA, four shutouts and a .947 Sv%.

Svedberg plays straightforward butterfly with limited ‘extra’ movement, preferring to ‘square-up’ to the threat rather than reacting to make the save. He’s not an overtly aggressive goalie – but will challenge shooters if necessary. His pro-caliber size benefits this style and makes him a challenger for the starting job in Providence this fall.

As the youngest of Boston’s trio of undersized blueline prospects, Matt Grzelcyk just squeezes into my preseason top-twenty. Like Torey Krug and David Warsofsky, Grzelcyk is listed at 5’9 – League-wide, only five defensemen of similar or lesser stature dressed for more than two games in ’11-’12.

His defensive game isn’t elite – but he has a good head on his shoulders and reads the play well. While his physical game projects as a NHL ‘minus’, he’s not adverse to going into corners and battling or throwing the occasional hip-check.

As a college-bound athlete, Grzelcyk has time to bulk up and round out his game before turning pro in a few years. With his skillset, I’m bullish on his NHL potential, but his size puts a limit on our ultimate expectations for the Bruins’ 2012 third-rounder.

During the 2011-12 USHL regular season, Gothberg became the league’s leader in save percentage (.921) and shutouts (7), second in goals against average (2.23) and fifth in wins (24). The University of North Dakota commit has been a huge reason why the middling Force allowed the second-fewest goals in the USHL and qualified for the postseason.

Gothberg twice participated in the World Junior-A Challenge, helping the US to medal on each occasion and posting a 0.50 GAA and .979 Sv% for the Americans last November including a shutout in the bronze medal game.

This season has obviously been a great one for Gothberg – and he’s ending it on a high-note: Three times since mid-January he’s been named the USHL’s “Goaltender of the Week”. He’s still a long way off – a few years from contending for a spot in Providence and a few more from competing for a NHL job – but he’s trending upward. Gothberg is a real battler and ‘instinctive’ goaltender, not so different from the stylings of fellow Bruin properties Anton Khudobin and Tim Thomas.  He has to work on his technique and angles, but don’t be surprised to see him grace the top-ten (or higher) in the next edition of these rankings. 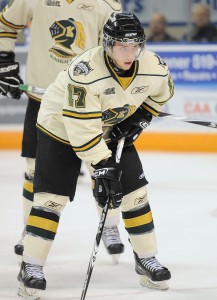 The Bruins traded Benoit Pouliot to Tampa in order to get a shot at the once passed-over forward from the London Knights, Seth Griffith. After lighting-up the OHL to the tune of 45 goals in 2011-12, Griffith announced to the hockey world that passing him over again would be a mistake.

The knocks on Seth’s game are considerable: He’s undersized. He lacks strength. He’s not fast.

However, in the past few seasons, Griffith developed a very intriguing offensive skillset. He has quick hands and impressive agility. His vision and hockey-sense border on ‘elite’. I love his upside as a puck-possession forward.

If Griffith continues to grow his defensive-game and add muscle, his offensive skillset alone should warrant a top-nine role at the NHL level. Obviously, improving his speed would improve his chances even further but his ‘shiftiness’ may be enough.

This season, he’ll lead the younger (but still contending) Knights as they look to make noise once again in the OHL. After earning ‘Player of the Week’ honors right off the drop of the puck (thanks to five goals in his first two games) – expect him to contend for the OHL’s scoring title and earn an NHL contract in the spring.

Methodology: Both Griffith and Grzelcyk could be considered ‘project picks’ – but as a rule defensemen take longer to develop. I value Grzelcyk’s upside higher than Griffith’s – but not enough to overcome the significant risk that comes with his size.

Trotman took major strides in 2011-12, jumping five spots to the verge of my top-ten. He exploded for a double-digit goal total with Lake Superior State and added three points in his first stint with Providence.

His skating-game took significant strides (pardon the pun) over the past calendar-year, showing up at the Bruins’ 2012 development camp as one of the most mobile d-men in the system. His shot is very heavy (though he needs to work on getting it consistently lower and more tip-able) and he has a future as a powerplay triggerman.

He plays with a good physical edge and has an active stick but some question his play-reading and puck-moving upside. If he continues to develop these areas, he has definite middle-pairing potential.

Trotman must contend with the blueline depth in Providence and the challenges of being a first-year pro. However, if his improvement over the past year is any indication – big things are on the horizon for the Bruins’ former last overall pick.