“I’d never before seen a player  leave the bench and go into the medical room in the middle of a game unless he was injured and needed immediate attention … [it was] a watershed moment in the history of the franchise.”

, the newly published memoirs of Dr. John Finley, a man who served as the team physician for the Detroit Red Wings from 1957 to 2003. Who left the bench? Why? And why was it a watershed moment in the storied history of the Red Wings?

You’ll have to buy the book to find out.

And you don’t need to be a Red Wings fan to enjoy Hockeytown Doc. I confess to going into this book prepared to be critical, not because of its focus on the Wings, but because the author is a physician. Great physician-communicators are even more rare than great physicist-communicators; physicians tend to speak in their own language and think that it’s as entertaining to the rest of us as it is to them. Furthermore, you don’t keep a job like Dr. Finley’s job for nearly fifty years if you have any trouble at all with confidentiality.

That said, if Dr. Finley’s writing style were on skates, he would be no Fedorov; yet nor is he awkward or stilted or at all convinced of his own importance. Rather, he looks back on his long and impressive career in Hockeytown Doc with his own subdued brand of awe that, if not edge-of-your-seat gripping, is entertaining none the less. Some lighter moments include:

THE DOCTOR ON INJURIES

In some ways, Dr. Finley’s book reads like an anachronistic telling of Dickens’ A Christmas Carol, with the ghosts of Hockeytown’s past and present, as well as the ghost of hockey’s future, weaving in and out of the text. Rather early in the book Finley discusses hockey-related injuries at some length, always using some unfortunate player’s fate as an example. The scene he depicts as he and others work to stitch up a player anxious to get back on the ice is reminiscent of an episode of M*A*S*H, and the impression is that both then and now, the medical staffs who work behind the scenes in pro hockey are the next best thing to battlefield surgeons. His discussions of steroid use in the NHL as well as the severity and gravity of concussions–including Chronic Traumatic Encephalopathy (CTE)–are both relevant and readable.

THE DOCTOR ON ICONS 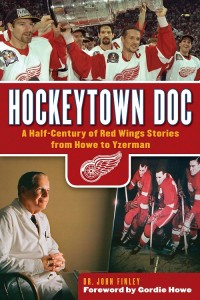 As the book unfolds, Finley begins devoting chapters to specific icons in Red Wings history (including Olympia Stadium), and it’s here where the book is at its best and at its worst. His profile of legendary coach Jack Adams can hardly be called flattering, but Adams was such a massive personality that any profile that hopes to be honest can’t possibly be too flattering. To his credit, Finley does a fair job of remembering the recalcitrant Adams, noting how he would stalk the dressing room with train tickets visible in his jacket, a reminder to any player that if his performance was sub-par he could be on that night’s train to the minors.

His profile of Mr. Hockey is perhaps a bit too colored by his fondness for and long friendship with Gordie Howe, openly contributing to the myth-making of Howe as the ideal physical specimen and most perfect hockey player of all time. That said, I sheepishly admit that as much as I grew up to Gretzky, the stories attached to Howe and his subtle, vengeful, yet wholly productive brand of hockey represent, for me, the game at its finest, and I can read all day long of Gordie putting rookies in their place, scoring oh-so-timely goals, and getting revenge on players months after the fact. Plus you have to smile at the advice Howe gives to the author’s kids while skating around on a backyard rink one day: if they need to teach an opposing player a little respect, just “rap the back of his calf with your stick blade, just above the top of the boot.”

Even fans who despise the Red Wings give props to Steve Yzerman, and Finley’s profile of Stevie Y is compelling in part for the laundry list of injuries number 19 played through. Equally admiring are the profiles of Ted Lindsay and Nick Lidstrom, although his recollection of Detroit’s famed Russian Five was, for me, the most intriguing. The only puzzling profile is the one devoted to forgettable coach Ned Harkness. I can not for the life of me figure out why it’s in the book.

Hockeytown Doc is richly illustrated with dozens of photos spanning the decades, and in some cases the photos are not for the squeamish: before-and-after photos of massive lacerations to Borje Salming and Greg Smith, for example, graphically display both the vulnerability and the resiliency of the hockey face. Another features legendary coach Jack Adams as a kid playing on a YMCA team from 1914, hardly at all suggestive of the fierce, intimidating competitor he would become; and a great shot from 1976 of Olympia Stadium, made even better by the marquee’s announcement that KISS was playing that night.

Whether the hardcore Wings fan finds much of the material in this book new or not, I can’t say, but a lot of it was new to me. I found it especially revealing that Dr. Finley comes very, very close to admitting that he discouraged Wings GM Jimmy Skinner from drafting Bobby Clarke in 1969 on account of Clarke’s diabetes. While it’s no secret that Clarke dropped in that year’s draft to the second round,  #17 overall, because of his diabetes, it was compelling to read Finley’s brief account of his advice to Skinner, in which he says despite knowing athletes with diabetes, Skinner should keep in mind that Clarke may not heal as quickly from injuries and may be susceptible to infections. He goes on to note that the Wings instead took goalie Jim Rutherford, and that “both players went on to have great careers.”

Umm, no. Fortunately that’s the only blatant falsehood in this otherwise entertaining and recommended hockey read from the rare perspective of a team physician.

Published by Triumph Books, Hockeytown Doc is available through the usual sources such as Amazon.com and Barnes and Noble. Furthermore, at noon on October 6, Dr. Finley will be at Hockeytown Authentics in Troy Michigan with Hall-of-Famer Bill Gadsby signing copies of his book.