Jeff Skinner scored his team-leading 13th goal and Kyle Okposo also scored for Buffalo. Defenceman Nathan Beaulieu had two assists, and the Sabres improved to 10-6-2 for their best start since opening 11-7 in 2011-12.

The Sabres’ three-game winning streak is their second of the season. Buffalo won three straight just once a year ago, when the team finished last in the NHL standings for the third time in five seasons.

Anthony Cirelli scored for the Lightning, who lost consecutive games for the first time since an 0-3 skid from March 24-29 last season. Tampa Bay was coming off a 6-4 loss to Ottawa in which the Senators rallied from a 4-2 third-period deficit.

The Lightning’s best chance to tie it came in the final seconds when Steven Stamkos fed a pass through the middle to Nikita Kucherov, whose one-timer from the lower right circle was stopped by Hutton. 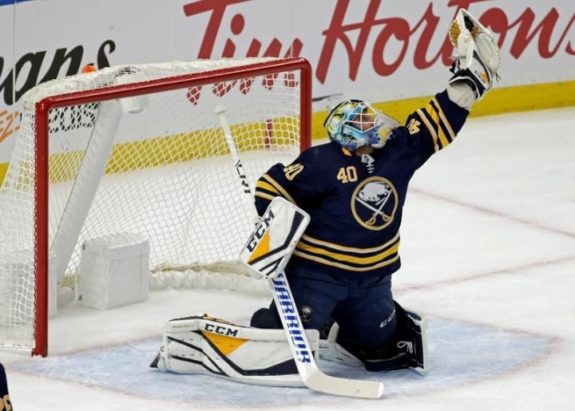 Kucherov also had a shot from the same spot hit off the post and carom out the other side about 30 seconds earlier.

The Sabres limited the NHL’s top-scoring offence to one goal, and after Tampa Bay had scored four or more in each of its past five games.

Skinner opened the scoring with 2:15 left, when he was parked in front and converted a rebound after Domingue stopped Sam Reinhart’s shot from the top of the right circle.

The Sabres somehow matched the Lightning in scoring one goal apiece in the second period despite being outshot 14-2.

Hutton held the fort in making numerous clutch stops starting from the opening minute, when he foiled Stamkos driving in alone across the front. Hutton also stopped Alex Killorn on a 2-on-1 break with 90 seconds left.

Okposo put Buffalo up 2-0 at the 5:43 mark of the period when he used defender Victor Hedman as a screen and scored on a low shot from the right circle that fooled Domingue.

The Lightning responded 15 seconds later, when Killorn flipped a pass from his own blue line and over two Sabres defenders, including a leaping Rasmus Dahlin. The puck landed on the stick of Cirelli, who scored on a breakaway by beating Hutton high on the glove side.

Lightning forward Adam Erne left the ice holding his jaw after being struck by a shot from teammate Ryan Callahan with 6:44 left in the second. Erne returned before the period was over.

NOTES: Lightning D Erik Cernak made his NHL debut after being called up from Syracuse of the AHL earlier in the day. The 21-year-old replaced Anton Stralman, who missed his second game with an upper-body injury. … The Sabres are 6-2-1 at home, a year after matching a franchise low with 11 home wins. … Sabres C Patrik Berglund was a healthy scratch, with C Zemgus Girgensons returning after being a healthy scratch against Vancouver on Saturday. … A pair of hockey Hall of Famers, goalie Dominik Hasek and forward Dave Andreychuk, watched from a private suite. The two were Sabres teammates, and Andreychuk finished his 23-year career with the Lightning.