The present is unequivocally the best time to be a Blackhawks fan in the franchise’s 88-year existence. Fresh off a memorable playoff run and second Stanley Cup in four seasons, Chicago is riding high.  While the optimism is sensible in light of the team’s current competitive prosperity, a murky cloud nevertheless hangs over the Blackhawks’ future. That cloud will truly take form in the 2015-16 season and bring with it a situation familiar to Chicago fans; indeed, a circumstance exceptionally similar to what occurred immediately following the Stanley Cup victory in 2010. Our “cloud,” of course, is the salary cap. The two-word phrase, vexatious to Blackhawks fans circa 2010, appears quite likely be so once again very soon.

For some perspective, we’ll first examine what the Blackhawks’ status regarding the salary cap presently looks like. Chicago has $495,822 of cap space under a $64,300,000 ceiling. The space for maneuvering is clearly limited, but this is almost uniformly the case for championship-contending rosters across the NHL. The Blackhawks have a slew of large per-year hits on the books; 30% of the roster (7 contracts) eats up 61% of the team’s total cap room.

Each of these 7 deals extends into the 2014-15 season, in which the salary cap ceiling is set to rise to $71,100,000. For the Blackhawks, this increase will be essentially canceled out by the then-kicking-in raises for Andrew Shaw, Niklas Hjalmarsson, and Corey Crawford. Crawford will reap the largest salary increase of any member on the Chicago roster, with a 125% raise propelling his yearly earnings to an annual $6,000,000 – the biggest single-season cap hit of any Blackhawks player other than Toews or Kane.

Crawford’s deal has been criticized by some and defended by others, but whichever side one takes is largely immaterial; the reality is that Chicago will become even more top-heavy in 2014-15 with regard to their salary allocation. Given that the depth in both 2010 and 2013 is nearly unanimously labeled as each team’s most transcendent and advantageous trait, too much money apportioned to the very top of the talent pile may well prove problematic. This, then, constitutes a major problem leading into the 2015-16 season, in which a number of the Blackhawks’ most important players are due new contracts.

Chicago currently has just $40,813,462 committed to player contracts for the 2015-16 season. As you may have guessed, however, this figure is quite deceiving; among others, Toews, Kane, Brandon Saad, Nick Leddy, Johnny Oduya, and Marcus Kruger are all up for free agency. Further, that ~$40 million number encompasses just nine players: five forwards, three defensemen, and a goaltender.

The dilemma has now materialized. There is no guarantee that the cap ceiling will increase any more; it may well stay in place or perhaps even decline slightly. If we very generously employ a $73,500,000 ceiling for 2015-16, that leaves the Blackhawks with just $32,686,538 to sign eight forwards (most teams carry 13), three defenseman, and a backup goalie.

Toews and Kane signed identical 5-year contracts in late 2009. For simplicity’s sake as well as their comparable on-ice value, we can assume for our purposes here that they will do so again. Ryan Getzlaf and Corey Perry’s recently signed extensions (totaling $16,875,000) with the Anaheim Ducks serve as reasonable precedents for Toews and Kane. Actually, that’s likely a tad on the low end of what we can expect Chicago’s duo to ultimately receive; having won 2 Cups with Chicago is a powerful bargaining chip, and both are three years younger than Getzlaf and Perry. I would estimate the combination of Toews and Kane’s deals to be somewhere in the neighborhood of an annual $18,000,000, give or take a little.

Brandon Saad’s entry-level contract expires at a rather unfortunate time for the Blackhawks, with his (much deserved) salary boost coming alongside Toews and Kane’s. James van Riemsdyk and his $4,250,000 annual cap hit is probably the best comparison for Saad. However, we need to add a few footnotes to that: it was August of 2011 when van Riemsdyk signed, a time both before the 2012 lockout and with a lower cap ceiling than our projected $73.5M. Additionally, he was just a 40-point player at the time. Saad, meanwhile, is on pace for a 26-goal, 57-point season, and has put up those numbers while averaging just 16 minutes per game and splitting duty in the top-6 and bottom-6. Considering all this, let’s tentatively envisage a flat yearly hit of $5,000,000 on Saad’s extension.

Nick Leddy has been groomed for several seasons as Hjalmarsson’s eventual partner on Chicago’s second defensive pairing. His own-zone play has progressively improved over the years while his offensive ability has consistently put the Blackhawks into good positions. Leddy’s speed and on the whole effortless stride (illustrated below) fit tremendously well into Chicago’s puck possession scheme. 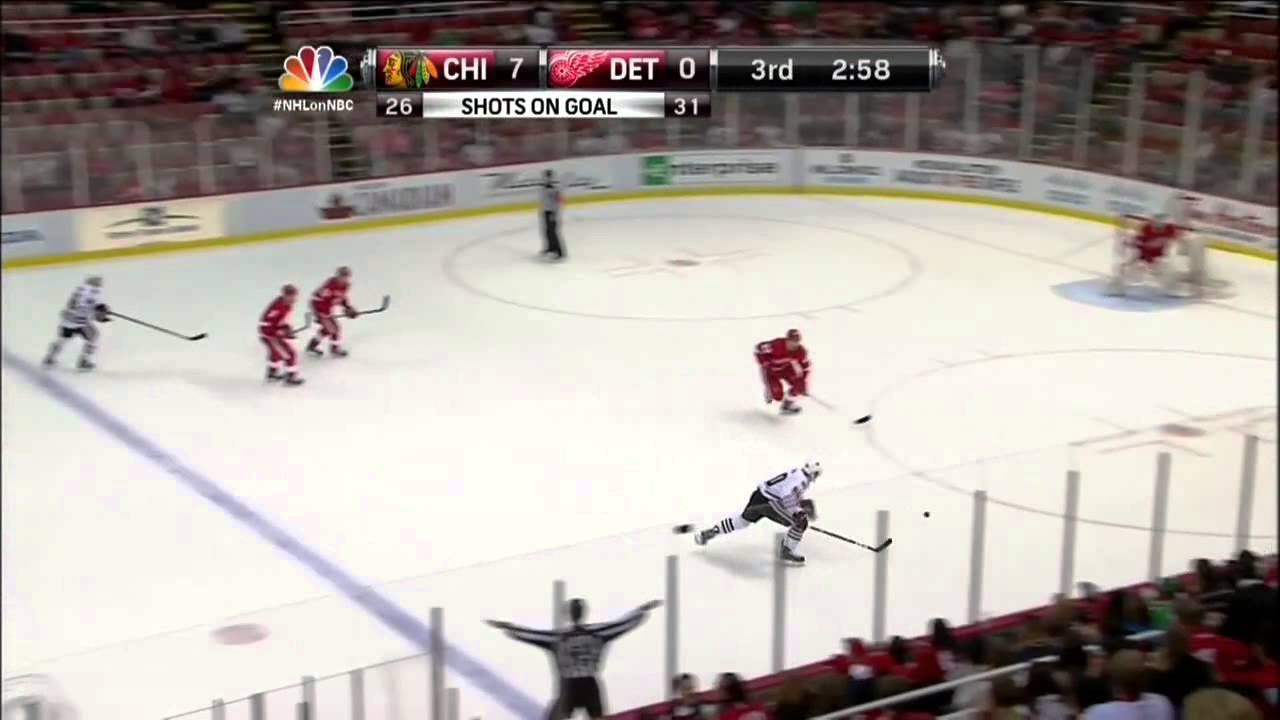 Slava Voynov’s contract, signed last summer, is a fantastic parallel to what we can expect for Leddy. Voynov’s backloaded deal carries a cap hit of $4,166,667. Leddy is generally held in marginally lower regard than Voynov, so we can fairly designate his next contract with the Blackhawks as taking up somewhere around $4,000,000 per season.

Keep in mind that this assumes a $73.5 million cap ceiling, which could very easily not be the case… as well as the fact that any of Toews, Kane, Saad, or Leddy could (quite justifiably) collect more on their upcoming contract extensions than I’ve predicted.

Complicating matters further is the small chunk of cap space teams regularly leave for emergency situations such as a short-term injury to a roster player (in which injured reserve would not be an option). The $5,686,538 figure is thus a bit high; Stan Bowman would likely give himself only about $5 million of that to spend on filling out the roster. It seems easy to simply say “just toss some free agents some league minimum contracts to complete the roster,” but the league minimum will be higher than the current $525,000 in 2015-16. Additionally, Chicago has a number of prospects who would likely fill these open spots as opposed to fringe free agents. These prospects do not come with a large price tag individually, but their respective deals are (generally) above the aforementioned minimum by a few hundred thousand each, and these differences add up. Teuvo Teravainen, for example – the Blackhawks’ best prospect – has a $925,000 cap hit in 2015-16.

It appears probable, then, that Chicago will need to unload at least one (and perhaps two) of its larger contracts to avoid sacrificing any semblance of an ability to ice a competent fourth line, third defensive pairing, and backup goaltender in 2015-16. I imagine that the quick response to that statement will be an entire fanbase’s loud exclamation to get rid of Bryan Bickell. The shortsightedness of that aside, there is no guarantee that any team would be willing to take on Bickell’s deal, or even that somebody would be particularly eager to help out the Blackhawks at all. Furthermore, Bickell’s contract alone would probably not clear enough space on its own.

Why not? Because Brent Seabrook and Andrew Shaw are due for nice raises of their own after the 2015-16 season. Especially Shaw, who will at that point have played two years with an annual salary of $2,000,000 – at least a full one million below his real yearly on-ice worth.

Blackhawks fans sincerely hope that the salary cap come 2015-16 will not constrain Chicago in the same manner it did during the summer of 2010.

We’ll have to wait and see. It will be exceedingly interesting to watch this unfold.