The Nashville Predators know that Pekka Rinne will be their number-one goalie barring any unforeseen disaster. After the great Finn, the picture on the depth chart gets hazy.

Carter Hutton was the backup last season, and did good in limited work behind Rinne. However, he is an unrestricted free agent and some of the moves that General Manager David Poile has made behind the 30-year-old make fans wonder if Hutton will be back next season.

The Predators had a pair of young prospects in Marek Mazanec and Juuse Saros that both earned time with Nashville’s American Hockey League affiliate, the Milwaukee Admirals. Saros eventually wrested the starting job and looks like he could be the goalie of the future.

A wild card was tossed into the mix when Swedish netminder Jonas Gunnarsson inked a one-year entry-level deal on June 1. The signing now makes people think who will backup Rinne and eventually be his successor.

Mazanec doesn’t have the flash that Saros has, but getting a new contract might mean a chance for him to be the backup if Hutton is not retained. The Pisek, Czech Republic native will get an extended look if he is the backup and he could hold some trade value. The same situation happened with Magnus Hellberg in the last offseason when he got shipped to the New York Rangers for a draft pick.

The Forssa, Finland native took the ball and ran with it for the Admirals with a 29-8-0 mark and 3.10 GAA, which got inflated after some early struggles. The 21-year-old also has a sterling record at the IIHF Worlds as he’s not been scored on in the two tournaments he’s appeared at for his home country.

Experts believe that he will be “the next big Finn” in between the pipes for Nashville. He’s still a couple of years being the backup or even competing for the starting spot, and he’ll need some more seasoning in minors. The moves being made are clearing a path for Saros to get the experience he needs.

The Thunder Bay, Ontario native has been with the team for three seasons and was the team’s starting goalie in 2013-14 when Rinne suffered a hip infection. He’s often underappreciated, but was solid with a pretty good 7-5 record and a 2.33 GAA.

RELATED: Carter Hutton Proving to Be a Solid Backup for Nashville Predators

He helped out when Rinne stumbled in the regular season and even earned back-to-back starts. Some took swipes at him because he wasn’t at a level to give the starter a break, but he was a capable backup this year.

He even made one of the most memorable saves in team history. 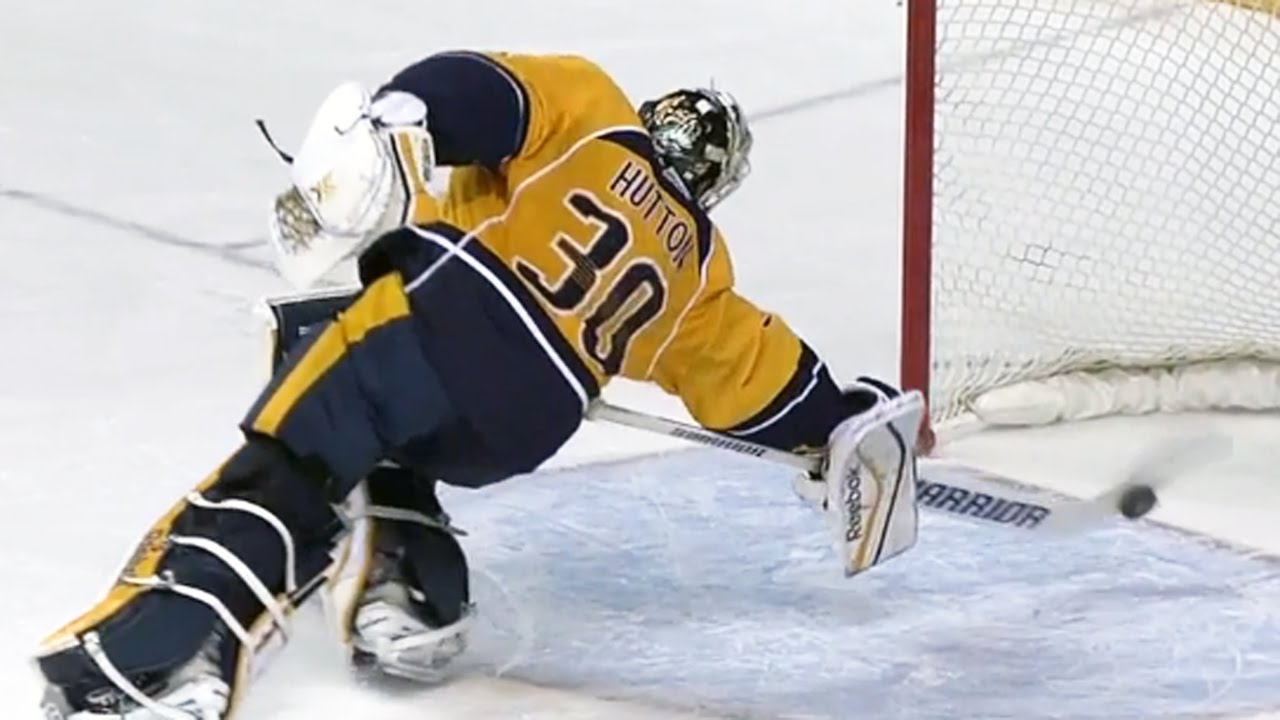 The Predators should re-sign Hutton to a one-year deal and deal Mazanec. Hutton played well enough last season to earn more starts, and the Preds need a goalie who can play a solid 15-20 games to comfortably allow Rinne more rest next season. On-ice play aside, Hutton is a great guy to have in the locker room and always has a positive attitude.

A short-term deal would also buy time for Saros to develop into an NHL-ready goalie.

Further, Mazanec’s high upside is certainly attractive to many teams throughout the league. A new organization not clogged with talent in net could benefit Mazanec.

The wild-card is the signing of Gunnarsson, as it means Hutton is likely on the outs. The 24-year-old Swede didn’t have the most dazzling statistics, but Malmö wasn’t a good team. Poile thinks that he has a diamond in the rough with the Eksjö, Sweden native.

Gunnarsson played in 44 games in the Swedish league and had a 2.47 GAA and .913% Save Percentage (SVP). The Redhawks were carried by Gunnarsson and he can handle a heavy workload.

Nashville could go another direction and re-sign a backup goalie like a James Reimer or a Cam Ward if they want a short-term solution while Saros readies himself.

The Predators could let Hutton go and then deal Mazanec for picks or prospects if they go this route. Ward has been open to staying in Carolina, but will get less than the $6.3 Million he got this season.

What’s Likely for the Nashville Predators?

It looks like Hutton is gone at the start of free agency and Mazanec will back up Rinne for at least this season. Saros will get the bulk of starts in Milwaukee and Gunnarsson will be the backup.

It’s going to take until the start of free agency on July 1 before the cloudy backup goalie situation clears up some.