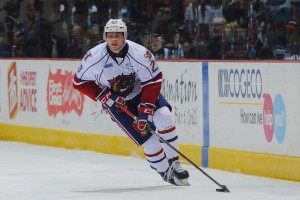 Cole Candella is quietly making a name for himself on the Bulldogs’ blue line. (Brandon Taylor/Hamilton Bulldogs)

Candella was drafted by the Belleville Bulls in the second round of the 2014 OHL Draft – 23rd overall. While he struggled to adjust to the OHL game in his first season with Belleville, recording just six assists in 60 games in 2014-15, Candella found the next step to his game this season.

With the Bulls’ move to Hamilton – becoming the Bulldogs in 2015-16 – Candella’s notched four goals and 20 points in 37 games. While his minus-12 is not the most impressive stat, it can boil down to the overall play of Hamilton this season.

Candella was forced into a leadership role on a young blueline after their back end mainstay, Justin Lemcke, went down with an injury. While he’s taken advantage of the opportunity offensively, Candella’s game in the defensive zone has also been exposed slightly.

He’s a big body that isn’t afraid to go into the dirty areas. He should be able to grow into a two-way defenceman with a powerful shot from the blue line – and has the ability to control the tempo of the game with his puck possession skills.

At only 18, Candella still has a lot of time to develop his skills further. However, the 6’1” defenceman has the all-around skill and physicality to be a solid shutdown blueliner. While he’s not one of the top defensemen in the draft, Candella should have his name tossed around early in the fourth round.

Candella is a second year defender who has really stepped up in [Lemcke’s] absence to take control of a young defense corps. A jack of all trades kind of defender, Candella has been showing a lot more offensively in recent weeks, and as his confidence grows, so will the production. With good size and a well-rounded skill set, he’s certainly a candidate for a top three round selection.

While Candella does have to work on some of the smaller points of his game, he’s quietly made a point to become a late third-round pick in the NHL draft. He likely won’t slot in as a defenceman on the top pairing, but could make a solid three or four if he can hone in on his ability to see the ice and control the tempo of play. He could grow into a solid powerplay quarterback with quite a bit of offensive upside.

Shots From the Slot:

Candella has shown an ability to stay out of the box while remaining a physical asset to the OHL’s Bulldogs. While he’s just started to show his offensive skill in the OHL, Candella recorded 54 points in 60 games with the Minor Midget Vaughn Kings in 2013-14. He loves to rush the puck up the ice and says he looks up to defenceman like his favourite player – Drew Doughty.