The Colorado Avalanche are just days away from what could be one of the most interesting draft days in recent history. There are three phenomenally talented players to choose from at the top of the draft and a number of teams who seem to have possible interest in making a move to get to the top of the draft board.

Joe Sakic has made it clear that the Avalanche intend to make their pick when the time comes, and that that pick will most likely be used on one of the three big forwards in the draft, but wanted to maintain open lines of communication in the event that something came along that was just too good to pass up. So, what might something that is too good to pass up look like? 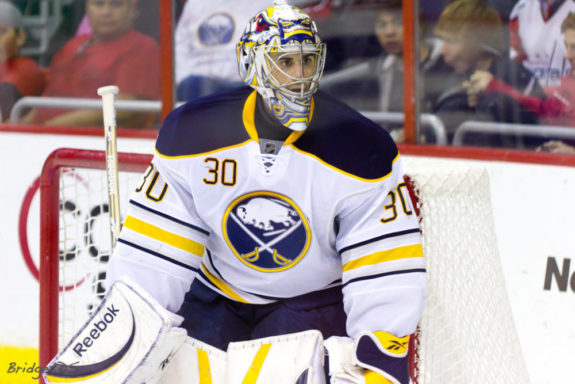 The Buffalo Sabres are a team that has had conversations with the Avalanche regarding a trade for the top pick, so we’ll start with them. The Sabres might be a team that the Avalanche would consider dealing with because this team is in a bad way right now and are absolutely desperate to try and solve their issues. That desperation might lead to a willingness to make a bold trade.

Once these comments came out, soon followed the speculation. Most of it came down to the Avalanche receiving Ryan Miller, Mikhail Grigorenko, a defensive prospect and the Sabres’ first-round pick (8th overall) this year. Avs beat writer, Adrian Dater, made it pretty clear what he thought about this possible deal in the linked article.

To me, the Sabres could be a possibility but would have to up the ante if they wanted to get this pick. Any trade with the Sabres would have to include either Grigorenko or Tomas Vanek, Tyler Myers, another defensive prospect and their top pick. You want a franchise player like MacKinnon or Jones? Time to pony up then.

If Calgary wanted the Avalanche to take this seriously, they will have to be a bit more bold than they have been. Throwing in next year’s first round draft pick as well might help persuade the Avalanche, but the Avalanche would be even more persuaded if the Flames were to offer a roster player (especially on the defensive side) that would help the Avs roster out right away. There really aren’t that many players on Calgary’s roster that would do that, and Calgary also burned any bridge they had with the Avalanche when they offer sheeted Ryan O’Reilly. If the Avalanche were to trade with Calgary, the Flames would not be getting the good side of that deal.

Florida might be the team that is the most likely to make a deal with the Avalanche, since they have the second-overall pick and might be the only team the Avalanche would consider trading with since they would still be in the top two, would still be able to get one of the big three prospects and possibly another roster player that can help out right now. Plus, they really want Nathan MacKinnon.

According to Adrian Dater, if the Panthers wanted to swap spots with the Avalanche, it would cost them Erik Gudbranson, whom the Panthers selected third overall in the 2010 NHL Entry Draft. Gudbranson has size and skill but hasn’t managed to thrive in the NHL as of yet.

On the Gudbranson front, my thought is that if you want a young defenseman that you’re going to have to really work that hard to develop, you might as well just take Seth Jones with the top pick and be done with it, but I’m not in the draft room for the Avalanche. The other thought is why not switch out Gudbranson for Kulikov and call it a day?

Might another team come out of the woodwork and make an offer the Avalanche can’t refuse? Of course, but these are the teams most likely to make some kind of an offer. Will any of these teams make an offer that is just too good to refuse? I doubt it, but it wouldn’t be a big surprise to see the Avalanche use up every last second of their draft time just in case.