There’s not much left in the 2018-19 season for the Detroit Red Wings. But as the organization prepares for the 2019-20 campaign, they could learn a thing or two from the team they just beat: the New York Islanders.

After allowing the more goals during the 2017-18 season than any team over the past 10 seasons, new head coach Barry Trotz refined his team’s defensive approach. It’s already paying off – they’ve allowed the fewest goals so far this season.

The Red Wings would greatly benefit from the same kind of commitment that Barry Trotz has been able to instill in his Islanders club. (AP Photo/David Zalubowski, File)

In a recent article by Pierre LeBrun of The Athletic, Trotz shared his thoughts on team defense and how he helped improve the Islanders:

“Defensive hockey is about pride and commitment and work ethic. It’s not skill-based, it really isn’t. I’ll say character-based. I asked our group, ‘We finished last in goals against with the highest goals against in the last 10 years. That’s 301 teams or whatever. That’s not very good.’ I just said to them, ‘I know this is an area that we can absolutely correct. I know that the group of people we have here have a lot of pride and we’re going to put some structure and pride in this area and if we do, then we’ll improve this immensely.’” (from ‘LeBrun Notebook: Jordan Binnington’s sensational rookie season aided by both old-school and modern approaches’ – The Athletic NHL – 3/18/19)

So heading into next season, why can’t the Red Wings follow in their footsteps? Perhaps more importantly, why couldn’t they achieve something similar this season?

Related: Red Wings on the Verge of Salary Cap Flexibility

Diving deeper into more advanced analytics, the story remains the same. The Islanders’ expected goals against per 60 was 2.78, while Detroit’s is a tenth of a goal lower through 72 games this season.

From a roster composition perspective, there are some similarities, though the Islanders could certainly score more. Remember the four-goal, third-period collapse?

Both teams featured a young forward core and an underwhelming defense. Goaltending wasn’t terrible for either team, but their netminding duos were not among the league’s best. 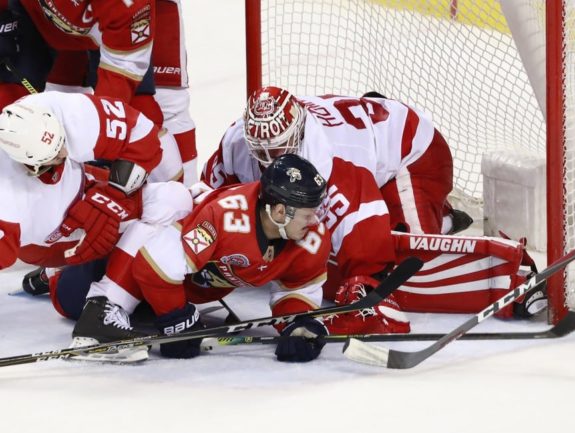 The difference is that the Islanders were able to implement a high-energy, aggressive forecheck that has been followed perfectly this season. To that point, on the Mar. 18 episode of NHL Now on NHL Network, goaltender Thomas Greiss shared that it’s a lot easier to tend the twine knowing where the five skaters in front of him will be at any given point. I’m sure Jimmy Howard and Jonathan Bernier would appreciate that sort of comfort.

Maybe there was something to Lou Lamoriello bringing in Valtteri Filppula, Leo Komarov, and Matt Martin over the summer? *Ducks*

While more aging, bottom-six forwards may not be the solution for the Red Wings, finding an appropriate strategy and establishing complete buy-in might be.

In the absence of talent, effort should be paramount. Plenty of times this season, neither talent nor effort were apparent.

Who’s to blame? Jeff Blashill for not holding his players accountable or implementing a game plan that suffocated opposing offenses? The players for not executing correctly or working as a five-man unit? The veterans for not leading or holding everyone accountable? 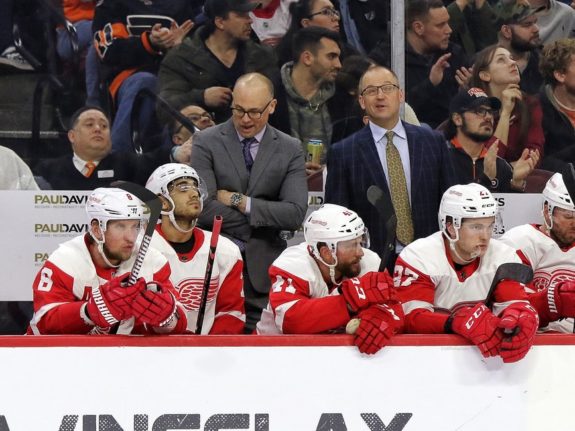 Blashill’s system is designed to be aggressive in the opposing team’s defensive zone, attempting to create turnovers there, rather than in the neutral zone. However, players are often out of position – whether that’s a forward in the wrong spot or the defense not playing aggressive enough.

On the opposite side of the rink, Detroit’s five skaters often have trouble breaking the puck out for a few reasons. First, the defense doesn’t do a great job retrieving the puck – either by getting there too slow or misidentifying the opposing forecheck strategy, as former THW and The Athletic contributor Prashanth Iyer noted. Second, the subsequent passes to break the puck out rarely stretch out opponents and allow the Red Wings to get caught in a small-ice trap.

And finally, if the puck is turned over, the scrambling to protect and defend thereafter frequently includes miscommunications and open players. Put together – a lot of shots and scoring opportunities for Detroit’s opponents.

Inspired a bit by @HockeyViz's tide charts, here's shot share by game minute for the Red Wings over the course of the season.

Wings seem to start well, completely bottom out in the 2nd period, and then score effects takes over late in the 3rd pic.twitter.com/bWO5DyT3xK

Like Trotz’s Islanders, the Red Wings need to buy into the strategy 100 percent to be successful. That hasn’t happened so far. But, it’s possible.

Until the Red Wings become a well-rounded team, they need to rely on their speed to win games. Not only can it help them generate scoring chances and draw penalties, but a tenacious forecheck in the neutral zone can suffocate opposing offenses and minimize high-danger chances against.

Want proof (other than the Islanders)? The 2017-18 Vegas Golden Knights reached the Stanley Cup Finals by playing a high-energy defensive game. During the two seasons prior, the Pittsburgh Penguins neutralized the high-powered Washington Capitals with a similar approach, before the Trotz-led Capitals beat the Penguins at their own game this past spring.

Can the Detroit Red Wings fix their defense under Jeff Blashill? Share your thoughts below.