DETROIT — Andreas Athanasiou scored twice, including a penalty shot, and Jimmy Howard made 40 saves in his 500th game to lead the Detroit Red Wings to a 3-2 win over the Ottawa Senators on Thursday night.

Frans Nielsen scored to break a 2-2 tie late in the second period.

Nielsen got the winner with 3:00 left in the second period. He got his ninth goal, from the bottom of the left circle, by converting a pass from Darren Helm after a turnover by Senators defenceman Dylan DeMelo. 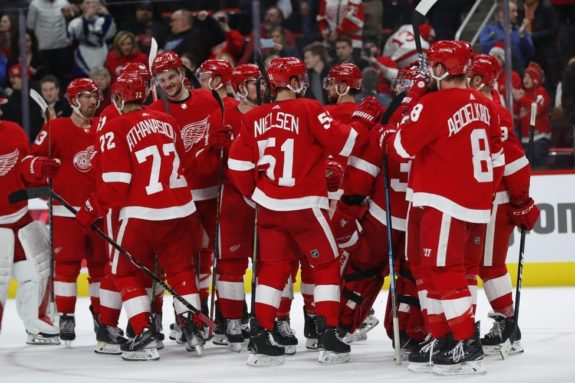 Duchene tied it at 2 with 6:21 left in the second. He skated around Detroit defenceman Jonathan Ericsson and beat Howard for his 26th goal.

The Red Wings led 2-1 after the first period.

Athanasiou scored his first goal with 9:16 left in the first. He cut in off left wing, skated across the crease and beat Nilsson with a backhand shot.

Tkachuk tied it with 3:36 remaining in the opening period when he put in a loose puck from in front. It was Tkachuk’s 13th goal.

Athanasiou restored Detroit’s lead when he scored on a penalty shot with 2:18 left in the first. Ottawa defenceman Christian Jaros impeded Athanasiou on a breakaway attempt. It was Athanasiou’s career-high 20th goal and third in two games.

NOTES: Detroit F Martin Frk cleared waivers and was assigned to AHL Grand Rapids. … Ottawa was without G Craig Anderson (eye) and D Mark Borowiecki (lower-body injury). … The Red Wings lead the NHL with four penalty shot attempts this season. They’ve been successful on two (both by Athanasiou), which ties the Vancouver Canucks for the league lead.

Senators: At Winnipeg on Saturday night.