Tyler Johnson, Mikhail Sergachev and Alex Killorn also scored to help the Lightning improve to 6-0-2 in the last eight games and reach 90 points in 58 games this season. Andrei Vasilevskiy stopped 32 shots for his fifth shutout of the season and 17th of his career to tie Ben Bishop for most in team history. 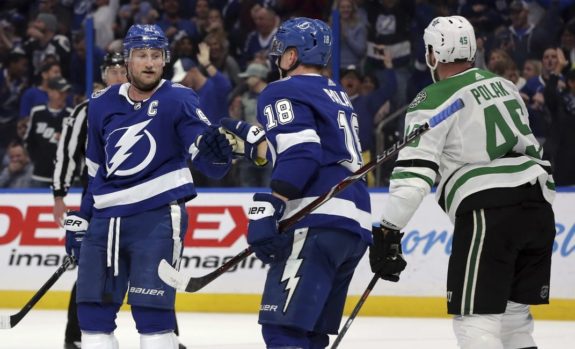 Dallas goalie Anton Khudobin was pulled from the game twice, allowing five goals on 21 shots. Landon Bow finished with four saves in 27:07 of ice time for Dallas, which fell to 1-2-1 in the past four games.

The Lightning scored three times in a span of 5 minutes, 24 seconds — including goals 14 seconds apart by Sergachev and Johnson — to chase Khudobin with 7:07 left in the first period. Bow allowed a goal to Kucherov on the first shot he faced with 5:20 left.

NOTES: Bishop practiced on Thursday but missed his fourth consecutive game with an undisclosed lower body injury. Stars head coach Jim Montgomery said Bishop was “50-50” to play on Saturday at Carolina. … Tampa Bay D Erik Cernak missed his second consecutive game with an undisclosed lower-body injury. … Johnson recorded the fourth 20-goal season of his career. … Tampa Bay’s four goals in the first period tied a season high. … The Lightning scored at least six goals in a game for the 14th time this season. … Dallas D John Klingberg did not play the final 13:45 of the game after blocking a shot.

Stars: At Carolina on Saturday.

Ovechkin’s All-Star Decision and the Logic Behind It