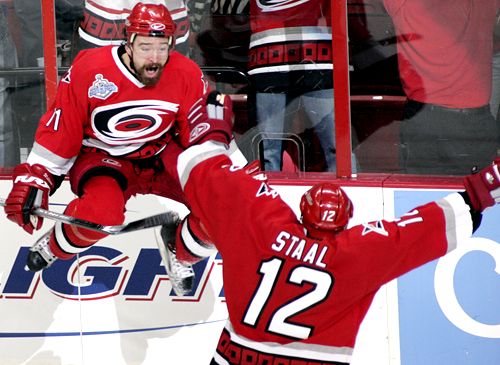 When I first heard that Erik Cole would be back in Carolina, I was on cloud nine. I always liked the guy: his attitude, his gritty style of play, his offensive upside and his instant chemistry with the Hurricanes’ star player, Eric Staal.

Cole has proven himself to Carolina fans. The guys in suits behind the bench may have changed since July, but Cole thrived under Maurice’s system for years. And except for a few new Finns, the roster is exactly the same as when he left it. This should be a great move…right?

However, then the doubts began to surface. Who did Carolina give up to bring Cole back to Carolina? Rutherford’s crystal ball must have been cracked this summer, because all he would have had to do to get the team in more or less the same shape it’s in right now would have been to fast forward a few months. It would have saved a lot of time, effort, and frequent flyer miles, that’s for sure.

So who did the Hurricanes give up? Obviously, Justin Williams. Williams is a “young” talent (everyone keeps saying that, but at 27, he has moved into the middle-aged athlete category) whose best years may very well be ahead of him. However, check my possible trades blog; it was his time to move on. Let’s be honest, Williams would not have stuck around for as long as he did had he not been the one leaping into the air in that somewhat iconic picture above, taken after he scored the empty-netter during Game 7 of the 2006 finals. Most GMs would have passed him on down the food chain after yet another long-term injury crippled his game. Los Angeles is building for the future, but the ‘Canes have to start being realistic about the present, and Williams was no longer a part of that. He will be missed – as much as you can miss someone who is never in your line-up.

Which brings me to Patrick O’Sullivan, the former L.A. King who was a Hurricane for all of five minutes. The more I hear about this kid, the more I wonder if Rutherford should have dropped the pen and stepped away. Fast and gifted with good hands, O’Sullivan is 24 years old, and though last year, his first full year in the NHL, was “disappointing,” he was on a good pace this season with 37 points in 62 games. He also had great chemistry with the young Kings team and played in several situations. In addition, his hometown is listed as Winston, North Carolina – there can not be many NC natives rolling around the NHL, if any.  The ‘Canes’ roster certainly isn’t getting younger, and O’Sullivan could have been a good fit. However, Rutherford’s last gamble on a promising but unproven high draft pick – Patrick Eaves – hasn’t exactly panned out, so perhaps he’s being cautious. So cautious he won’t trade for anyone who hasn’t spent a weekend knocking back mojitos with him at his summer house on the Outer Banks, that is. (Joking.)

The doubts continued after reading an with NHL.com’s Shawn P. Rourke, where Cole basically said that he was bummed over having to leave Edmonton before he really got settled in (though let’s be honest, you’d probably be ticked after being jerked around like that. Cole and his family had probably just finished unpacking the last box from the move, and now it’s time to bust out the tape gun all over again.) Of course, happier interviews followed once Cole touched down in Carolina. But still…

So this three-way head-scratcher is one in which a winner can only be declared after some time had passed. Edmonton seemed to get exactly what they wanted at the deadline and L.A. traded a part of its young core for a proven scorer and All-Star. Once Cole steps out onto the ice on Friday and delivers a few bone-crushing hits right before turning on the jets and plowing into the net with two defenders’ sticks planted in his midsection, all will be forgotten with his fans. However, more analytical observers and his critics will need a little more persuasion.

Of course, there is a third option, and that is that this was all part of Rutherford’s master plan. “Naw, that’s impossible!” …right?

This move seems to have been made almost entirely with Staal – Cole’s padawan learner and former road roommate – in mind, as the former hasn’t looked quite the same since the latter left. But we’ll see whether this safe choice pans out, down the stretch and in the long run. Welcome back, Erik. Now work some of your old magic.

4 thoughts on “They must have kept the receipt: Both sides of Erik Cole’s return to Carolina”