After being drafted in the NHL with a 2015 4th round pick by the Vancouver Canucks, Dmitry Zhukenov is having a good first season in North America, playing for the Chicoutimi Sagueneens of the QMJHL.

In this translated interview, originally appearing on the popular Russian website sports.ru, Vancouver prospect Dmitry Zhukenov talked about his move overseas, life in Canada, and experience with the Canucks.

– Dmitry, more than half a season passed when you first got playing in North America. What are your feelings?

– All is ok. I knew where I was moving to and why. I wanted to play in Canada since I played the World U-17 Hockey Challenge. I liked playing on the small ice surface. I also enjoyed the different atmosphere, the fans, the level of organization. I carefully weighted the option to get here to play. I talked with my parents and with my agent and we determined that for my future development it would have been better to move overseas.

– Your appreciation towards small ice was more important than your prospects with Avangard?

– I am not sure what my prospects would be with Avangard. I never talked about anything with them. Speculate is pointless. No one knows what will happen or what could have happened. I spent a lot of good time in Omsk. There live my relatives and friends. It wasn’t easy to leave my home town. But I took my decision. I think I was right and I don’t regret about leaving. Everyone has his own path.

– Avangard president Vladimir Shalayev spoke sharply about your and Dmitry Sokolov’s departure to Canada. Did you hear about it?

– You mean about that we won’t play well here? I never talked with Shalayev in person. All the negotiations were conducted by my agent. It’s not a player’s business. And regarding Shalayev’s words… well, let’s say that they only motivate me more. Only time will tell who is right. I think I’m doing well and I’m satisfied. Here there are all the conditions necessary to grow as a player. Here I am busy with hockey and nothing else.

– Chicoutimi is a small town. Are there enough entertainment options?

– I wouldn’t have much time for them anyway. I’m living with a billet family which billets players for 10 years already and know everything needed. I get out of home at 8 AM to get to the practices and get back for lunch at 2 PM. Sometimes at 4 PM there is another practice, and that pretty much means to spend the whole day at the rink. You can only rest a little bit before the game and that’s all. But I like it, nothing can distract me from the most important thing. There are also charity events. We visit schools, or other places for the children, we talk with them and we give autographs. I like talking with little kids. There is some good motivation both for me and for them. 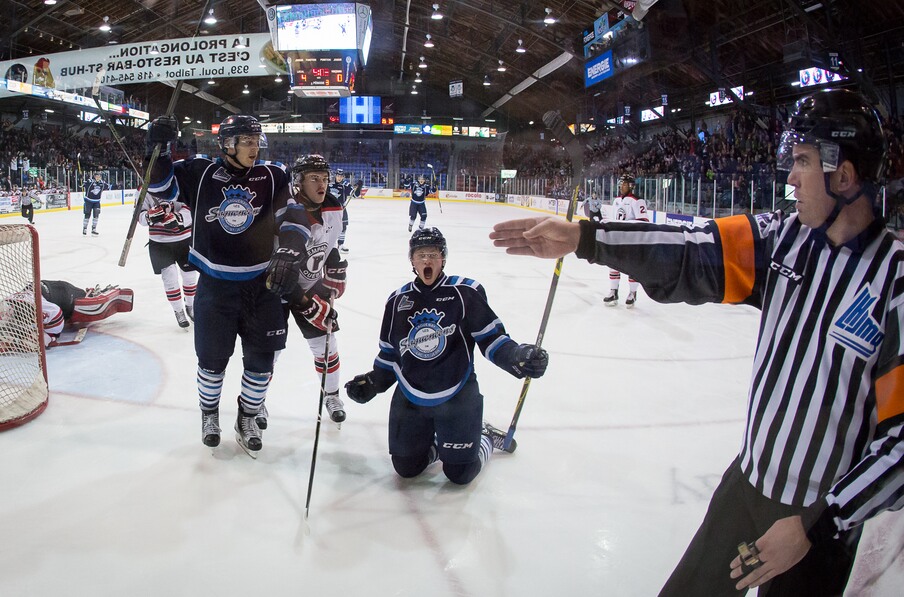 – You play in a very young team. Don’t you have a concrete goal for the season?

– No, we’re young, we’re working on the future. Many of our players are 99-born. But we play to win anyway, fans don’t like a team where players don’t give the hundred percent. Here people goes to hockey to have good time, they get here with the whole family. Watching at the stands is a true pleasure.

– If I’m not wrong, in Chicoutimi used to play the well-known goalie Felix Potvin.

– Yes, here played Antoine Roussel too. I am now playing with Xavier Potvin, Felix’s son. He’s a good goalie, but maybe he lacks a little bit of consistency. By the way, I’m not the lone Russian here, I’m playing with Artem Maltsev, from St. Petersburg, a good physical defenseman, he’s playing well and has a good reading of the game.

– Does the difference in mentality prevents you to successfully communicate with Canadian people?

– No, but there are some things… For example, here in Canada it seems to me that no one celebrates their birthday. It’s not usual to congratulate someone within the team, let alone making gifts. But this doesn’t stop the communication, of course. I have many friends within the team. I also talk with other Russian guys in the league, like [Vladimir] Kuznetsov and [Yegor] Popov of the Acadie-Bathurst Titans. I am friends with Dmitry Sokolov since we were five years old. I also have friends without hockey. With English language now it’s all much different if compared with when I was here first. But many people here talks French. Sometimes it’s hard to explain what you need in a store. My first purchase by myself was a pack of socks (laughs).

There was another funny thing. We were away, spent the night at a hotel and I wanted to call my teammate. His number starts with 991, but I mistakenly dealt 911. A girl replied me, asking me something in French language. I didn’t understand a thing and closed the communication. And then you could see police cars out there! Luckily I had some people to understand for me that I just had a mistake, that I don’t understand French. Otherwise it would have been a good fine (laughs).

– You were drafted by the Vancouver Canucks. Perhaps this is your biggest achievement so far?

– It’s hard to explain how happy I was. The actual team wasn’t important for me, I would have been happy with any pick. There was another interesting story. We were in America for a pre-season camp. So I was following the ceremony online and when it’s Vancouver’s turn internet crashes! One minute before I get a call from my agent, Rostislav Saglo, to congratulate with me as I was picked up by the Nucks.

– Of course! I attended two camps. The first one was a preparation camp with the other drafted players, while the second one had a tournament for “young stars” and then practices with the main team. It was a great atmosphere. It was great playing there and I was of course very impressed by the high level of the organization.

– What was the biggest victory and the worst defeat of your career?

– Thus far my biggest victory was the Russian championship of my birth year. And the worst defeat was of course the U18 WJC last season. The way we lost to Switzerland… I can’t explain even now what happened during that game. You know, when I get to watch an interesting hockey game, I wish to be on ice in that moment. All the best is still in front of me.

RELATED: Get To Know Dmitry Zhukenov