Coming into the 2015-16 NHL season, the Anaheim Ducks signed a few players to one year deals that have had an impact on the team now and could in future seasons. Anaheim picked up Chris Stewart, Mike Santorelli, and Shawn Horcoff in the off season. Recently Bob Murray added David Perron to the mix. All four of these players are unrestricted free agents at the end of the season.

The trade deadline is approaching quickly and Murray has several restricted free agents(RFAs) to re-sign. Once Murray has addressed the RFAs on the team, he will then turn his attention to the four above mentioned players. Depending on finances, Murray should try to keep some, if not all, of these four players and here is why.

When Stewart first played he didn’t record any points in his first nine games and was benched a few times by Bruce Boudreau. Stewart responded by playing better scoring three goals in his next five games. He continued to play better despite being a bottom six forward. He is willing to go to the net, forecheck, and fight on occasion as well.

The later addition of David Perron sparked his play and Stewart. They both were teammates in St. Louis for part of the 2010-11 season and then the following two seasons(2012-13 and 2013-14). Once the move was made for Perron, Bruce Boudreau changed his entire offensive lineup. He put Perron and Stewart together on the same line with Ryan Getzlaf. In the nine games they played together, Stewart registered six points(two goals and four assists). During that time Perron scored three goals and had six assists. Getzlaf’s play picked up scoring two goals and recording 10 assists during that time. Getzlaf had five multi-point games while the three played together.

Unfortunately in the game against Columbus on February 11, Stewart fractured his jaw in a fight with Dalton Prout. Stewart is projected to be out four to eight weeks.

With Stewart sidelined, Santorelli filled his role with Getzlaf and Perron. In six games on that line, Santorelli has five points, two goals and three assists. He is more of a bottom six forward, but he has filled in well during Stewart’s absence. He has nine goals this season and is fourth in goals scored behind Corey Perry(23), Rickard Rakell(16), and Ryan Kesler(13). He can play the center and wing position for added versatility in a lineup. He also plays a disciplined game with only eight penalty minutes through 55 games this season. If Bob Murray doesn’t keep Perron and/or Stewart, then he should consider bringing Santorelli back next season. 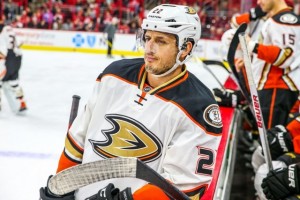 Anaheim Ducks center Shawn Horcoff (22) during the NHL game between the Anaheim Ducks and the Carolina Hurricanes at the PNC Arena.

Horcoff has been utilized more in a defensive role with the Ducks this season. In the beginning the season he played with Carl Hagelin and Andrew Cogliano, which did a great job of slowing down the opponent during even strength play. Horcoff can play wing and center, which does add lineup options for Bruce Boudreau. He was also used on the penalty kill was has been ranked in the top of the league for most of the season. The penalty kill has slipped since Horcoff’s suspension. In the 14 games he has been out, the penalty kill has only been 79.2% efficient. Clayton Stoner has also been out for a majority of that time and could have contributed to some of the decline too.

Horcoff may be the least desirable option out of this group to bring back however because the Ducks this past week just reclaimed Chris Wagner off waivers. Wagner is a much younger option, who can play wing and center also. He also makes bone crushing checks on a nightly basis. He started scoring goals this season making him a well-rounded future player for Anaheim.

Murray and the Ducks may not have the finances to keep all four of these players in the off season, especially after addressing the RFAs, but he can’t go wrong in trying to keep any of them. They each have made an impact on the team that is worthy of being on the roster next season and possibly in the long term.