Not all redemption stories can have happy endings. This is a reality in life that seems unfortunate, but is a necessary byproduct of a system such as modern sports, where every game and season must have winners and losers by nature.

One of the things that is most captivating about sports is their ability to bring together the realms of personal struggles and athletic struggles. After the tragic passing of Martin St. Louis’ mother last spring, the hockey world saw a New York Rangers team rally around the veteran winger. We saw them attend her funeral as a team, providing brother-like support to a man that had only been their teammate for about two months. They overcame a 3-1 second round deficit and went on to capture the Prince of Wales Trophy as the champions of the Eastern Conference. Our hearts soared when St. Louis buried a pivotal goal… on Mother’s Day.

Stories like that draw us as fans in. They allow us to see a different side of the athletes that we already adore, and realize that in many ways, they’re just like us- people who must overcome hardships and tribulations to function in life and fulfill their work-related duties.

St. Louis’ struggles last spring were unimaginable, and I’m merely using his story as an example. In no way am I comparing the intensity of what he went through to what any other player goes through. The reality is that we can never truly know what any player is going through, and while last year’s story of Martin St. Louis and his mother was tragic and inspiring to the highest degree, there are surely similar, maybe less tragic and devastating, but equally personal stories of struggle among players in the NHL.

When you talk about Alex Ovechkin, in my mind you’re talking about a man who could never get enough credit for how amazing he is, both as a player and as a person. On a personal note, I will soon be 20 years old. My childhood was spent in Raleigh, North Carolina as the most loyal Carolina Hurricanes fan you could imagine. For Ovechkin’s entire NHL career, he has been a member of a rival both divisionally and geographically to the franchise I support. Despite this, I can’t think of a player who better encapsulates the spirit of what hockey is all about to the members of my generation than The Great 8.

His development has been an absolute pleasure to watch unfold, from his entry into the league as the unbelievably talented and incredibly passionate rookie he was in 2005-2006 to the mature, far more level-headed, yet still just as talented leader he is today. From 2005 to 2010, Ovechkin was revered as a practically deistic manifestation of hockey talent. His goal totals from his first five full seasons in the NHL? 52, 46, 65, 56, 50. Those numbers are rather incredible, to be certain.

The Capitals never made a whole lot of noise in the postseason in that span, but questions about Ovechkin’s “will”, or “desire to win”, or “work ethic” had been limited to that point, and rightfully so. Nobody in their right mind would claim that Alex Ovechkin was in any way responsible for the Capitals not winning a Stanley Cup.

Then came the 2010 postseason. With Washington coming off an unparalleled 54-15-13 season in which they racked up 8 more points than the league’s second place team and scored an astounding 46 more goals than the league’s next closest team, they were the pre-eminent favorites to capture the league’s crown that postseason. Then they lost. They lost to the 8th seeded Montreal Canadiens in the first round, in seven games, undone by the improbable, heroic, other-worldly goaltending of Jaroslav Halak. This is where it all began to go awry for Alex Ovechkin. 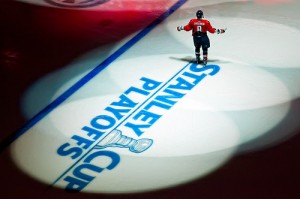 That fateful 2010 defeat at the hands of the Montreal Canadiens was where it all began. Heading into Game 7 of that series, the media set him up for what would take place over the next few years. Like a deer in a hunter’s crosshairs, Ovechkin was targeted by ESPN, NHL.com, The Toronto Star, and many more. You can read all of it, the links are right there. The message was sent, and the message was clear. That one, single Game 7 was to be a referendum on the success and maybe even the possibility for future success in Alex Ovechkin’s career. And they lost. They lost 2-1, despite Ovechkin’s assist on the lone Capitals goal. After the game, here’s what Ovechkin  had to say:

“I’m in shock right now. I don’t know what to say,” Ovechkin said, his voice low, his eyes staring at the floor of the locker room. “It was great going up 3-1 in the series. But it’s only one step. We didn’t do it.”

It’s rare in sports that you can point at one single moment as the start of an athlete’s downfall, but for Ovechkin, it was clear that this was it. Fair or not, Ovechkin’s reputation as a great player who couldn’t get it done on the big stage was set in stone on April 29th, 2010.

Maybe you think I’m being dramatic, but I don’t think so. The entirety of who Alex Ovechkin was as a hockey player was under attack from that point forward. The media belabored a message that for his team to be successful, something about his game needed to change. With Sidney Crosby just one calendar year removed from a Stanley Cup, the dichotomy of where they each were in their respective careers was never more contrasting than it was in the 2010-2011 season, in which they faced off in the Winter Classic. Before his concussion that season, Crosby had an astonishing 66 points in 41 games. Ovechkin, on the other hand, scored just 32 goals that year, by far a career low.

Ovechkin bought into the message that he needed to change, and his franchise did too. During the 2011-2012 season, they fired Bruce Boudreau, who is one of the most successful coaches in the NHL to this day. They brought in Dale Hunter to preach defensive responsibility, shot blocking, and a style of play that would be conducive to winning, or so they thought. But Ovechkin again failed to reach the 40 goal mark that year, as he put up 38 goals and just 65 points in 78 games.

The man who once put up 65 goals in a season and was unanimously the holder of the fictional “world’s best goal scorer title” was outscored by Michael Grabner, Brenden Morrow, and Daniel Briere in 2010-2011.  It was slightly better in 2011-2012, as OV’s 38 goals were good enough to get him 5th in the league, but that was still a vast departure from his prior form. And for context, some players who were within 1-3 goals of matching him that year: Scott Hartnell, Radim Vrbata, Erik Cole, Michael Ryder, and Milan Michalek. Not the goal scoring company we had come to expect from Ovechkin.

After using the lockout in 2013 to spend some time playing in Russia and getting back in touch with his roots, Ovechkin came back to the United States for the short season a new man. He captured the Hart Trophy as the league’s MVP for his excellent performance that year, but his team yet again fell in the first round.

If we ever needed proof that Washington’s inability to capture the Stanley Cup was not at all Ovechkin’s fault, the 2012-2013 and 2013-2014 seasons were definitively just that. While the teams around Ovechkin from 2005-2010 were very good, they were never good enough to go the distance. In those two seasons however, the Washington Capitals just weren’t a very good team. It didn’t matter that Ovechkin was performing at an MVP-esque level in both of them, they still couldn’t get out of the first round in 2013 and the following year they missed the playoffs entirely.

The 2014 calendar year was very rough for Ovechkin. He faced so much adversity, from his team missing the playoffs to the great disappointment that was Team Russia’s performance at the 2014 Olympics on their home soil. Based on what happened in 2010, it would be completely reasonable for one to expect Ovechkin to again shrink back to the form we saw from him in the two years following that one, but the maturation process Ovechkin had undergone from 2010 to 2014 was an incredible one, and that finally brings us to this year.

Heading into this season, the Capitals let go of Head Coach Adam Oates and General Manager George McPhee, signaling a culture change that would shift the franchise for the better. Brian McLellan would be the new general manager, and Barry Trotz would be the new head coach.

While there were questions about how the two would get along heading into the season, it turned out that Alex Ovechkin and Barry Trotz were a player/coach match made in heaven. Trotz implemented a more defensively oriented system, and Ovechkin’s offense did not suffer at all as a result. His production from last season to this season was virtually identical, and the only difference in his numbers was the vastly improved plus/minus rating that came as a result of a team whose defensive game had improved significantly.

Make no mistake, Alex Ovechkin’s story is one of redemption, but like I said earlier, not all redemption stories can have a happy ending. Ovechkin’s Capitals were again bounced from the playoffs in the second round, once again at the hands of the New York Rangers… for the third consecutive time.

Despite having gone through two seven game series and suffering yet another heavy disappointment in his career, Ovechkin jetted over to the Czech Republic to join Team Russia at the World Championships in their pursuit for gold… only to be defeated by a dominant Team Canada squad in the gold medal game.

You have to feel for Alexander Ovechkin. pic.twitter.com/hK9thHXLFg

Again, Ovechkin’s heart had to be broken. In a year when everything seemed different for his Washington club, it turned out it was just another second-round caliber team. He watched his season end from the bench, as Derek Stepan buried the Game 7 overtime winner.  He then dropped everything to proudly represent his country, as he so often has with the utmost level of loyalty and respect, only to fall at the hands of Sidney Crosby and Canada.

We learned a lot about this man’s character this year that we didn’t know before. We learned that he’s secretly been supporting several Russian orphanages financially. We saw the heartwarming friendship between him and a young girl with Down Syndrome that showed a truly compassionate, caring side of Ovechkin that we hadn’t seen before. On the whole, we’ve seen him mature from a highly skilled Russian kid with a lot of draft hype to a man who I would argue is now the best role model off the ice that the NHL has to offer, and that kind of growth is really what life and redemption stories are all about.

But it would be such a shame to see a player who will undoubtedly go down as an all-time great, who has devoted his entire life to this sport, go without ever capturing its ultimate prize. The marriage between Alex Ovechkin and the Washington Capitals seems to be one that is set in stone, and they’ll have to figure out together what the best way to achieve a Stanley Cup championship during his career might be.

However long and twisted the path that gets him there may be, I know I’ll be rooting for him, and you should be too.