Each Monday, we’ll take a look at the past week in fantasy hockey. Specifically, we’ll dive into which players are heating up, which players are cooling down, players to target on the waiver wire, and an update on fantasy-relevant injuries. From week to week, a lot can change in a player’s fantasy outlook due to line combinations, injuries, or just a simple tweak in their game and we will have you covered.

It’s not question it’s been a disappointing season overall for the Chicago Blackhawks and their star players. While Jonathan Toews is certainly having a down year on the score sheet, he has picked it up in a big way of late.

Over his last six games, he’s tallied an impressive nine points (three goals, six assists), which brings his season total to 49 points (19 goals, 30 assists) in 70 games. While he may not have been the Jonathan Toews you were hoping for all season, he’s starting to heat up for the stretch run.

A change of scenery appears to be just what Paul Stastny and his fantasy owners needed. Prior to his trade to the Winnipeg Jets, Stastny had gone pointless in his last four games with the St. Louis Blues. Since joining the Jets, he’s tallied seven points (two goals, five assists) in six games, while playing on the top line and number one power play unit. Stastny owners appear to be in for a nice finish to the season.

After being listed in the ‘Trending Down” portion last week, Will Butcher may have finally revived his offensive game. After going 16 games with just one assist, Butcher has tallied four assists over his last three games. He now sits with a solid 34 points (2 goals, 32 assists) in 68 games he’s played in his rookie campaign, and perhaps is showing signs of finishing the season the way he started it.

Prior to his recent drought, there was nothing to complain about, from a fantasy perspective, in Tylers Myers’ game. 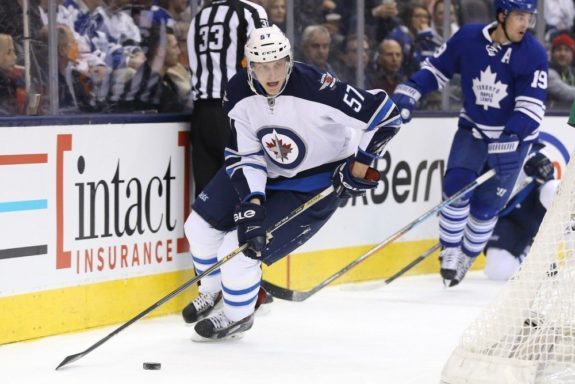 While he still has already smashed his previous career-high in points, he’s currently going through a bit of a dry spell, tallying just a single assist over his last eight games. Nothing has changed as far as his usage goes, so it’s likely only a matter time before he finds his form again, and adds to his 34 points (6 goals, 28 assists). Don’t give up on him just yet.

It was never in doubt Vladislav Namestnikov’s fantasy value would drop drastically when he was traded to the New York Rangers. Unfortunately, it has held true. Other than his two-point debut with the Rangers, he’s been held without a point. As of right now, the Rangers are only using him on the third line and number two power play unit, so he’s certainly not seeing the looks he was in Tampa Bay. It’s looking like a “wait till next season” type of situation with Namestnikov.

Surprisingly, another Jets player trending down. While the Jets continue to play good hockey as a whole, Mathieu Perreault has fallen off the face of the fantasy hockey world recently, currently on a nine-game point-less drought. His ice time has no doubt taken a hit following the arrival of Stastny, but a drop off in production of this magnitude was not expected. He’s impossible to trust going forward.

It appears the New Jersey Devils have found their new power play quarterback, which is what you want to hear in the fantasy hockey world. 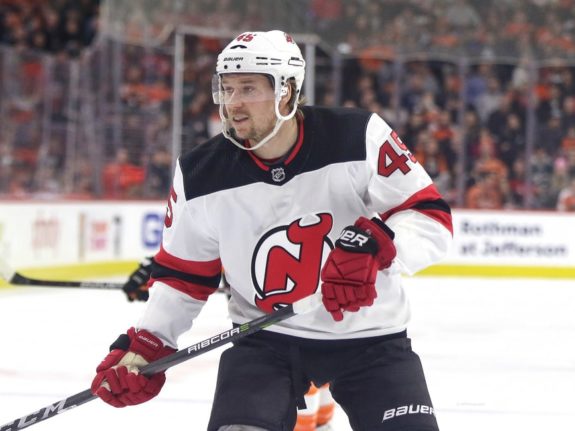 Sami Vatanen has recently taken over the role of quarterbacking the number one power play unit, in addition to playing on the top pairing. He’s seeing boat loads of ice time, and it’s showing on the scoresheet. Vatanen’s now up to 29 points (4 goals, 25 assists) in 60 games this season, including six points in his last six games. He’s a must-add for the remainder of the season.

While he is owned in nearly 50 per cent of fantasy leagues, there’s still a chance Adam Henrique is available in your league, and he may make for a quality add for the stretch run. He currently sits with a solid 41 points (20 goals, 21 assists) in 68 games this season, and may be in position to increase his current scoring pace. His main highlight at this time is his role on the Anaheim Ducks number one power play unit, which has been effective of late. If you have the space, he’s worth an add to see if he takes advantage of this role.

After being listed here last week, Brendan Gallagher’s ownership has increased four per cent, and for good reason. With Max Pacioretty out for the season, Gallagher as seen a bump in ice time, along with his role on the number one power play unit. He currently sits with 41 points (24 goals, 17 assists) in 68 games this season, and should continue to be effective down the stretch, given his high usage. He makes for a solid add in the majority of fantasy settings.

The fact that Alex Galchenyuk is owned in just 35 per cent of leagues seems crazy, given his talent and usage. Yes, he had a slow start to the season, but he has picked it up over the last month. He currently sits with 40 points (16 goals, 24 assists) in 68 games this season, and is now being relied upon heavily by the Montreal Canadiens to produce offense. He’s used in all the major roles on the ice, and is in prime shape for a strong finish to the season. Remember what he’s capable of, as seen in his past seasons. Don’t miss out.

While he may not be scoring at an elite pace like his brother, Jordan Staal is producing at a consistent, reliable rate. He currently sits with 37 points (15 goals, 22 assists) in 65 games this season and continues to play in all situations on the ice, including the number one power play unit. If you’re in a deeper league and are in need of forward depth, Staal most definitely fits the bill.

Weber has been ruled out for the rest of the season to undergo surgery to repair a torn tendon.

Crawford was placed on IR Dec. 27 with an upper-body injury. He remains out indefinitely, and recent reports are saying he may be shut down for the season, given the Blackhawks’ disappearing playoff hopes.

Shattenkirk underwent surgery to repair a meniscus tear and will be out indefinitely. He participated in morning skate on Tuesday, and is reportedly closing in on a return.

Palat suffered a lower body injury Jan. 20 and will miss six-eight weeks. As of Feb. 24, a mid-March return date is being projected. He recently stated he won’t be rushing back from his injury.

Johansson suffered a concussion Jan. 23 and is out indefinitely. He skated on his own Tuesday and Wednesday, but remains without a timetable for return.

Elliott underwent core muscle surgery on Feb. 13 and is expected to miss five-six weeks. A recent update says he should resume skating this week.

Thornton suffered a knee injury Jan. 23 and left the game. He has underwent arthroscopic surgery on his knee and is expected to miss several weeks. Sharks GM Doug Wilson said he believes Thornton will return before the end of the season.

Trouba suffered an ankle injury Jan. 25 and is expected to miss six-eight weeks. He skated for the first time since the injury on Feb. 26.

Eichel suffered a high ankle sprain Feb. 10 and is expected to miss four-six weeks. Eichel skated for the first time since Feb. 10 on Saturday.

McDonagh returned to the lineup March 10.

Bernier returned to the Colorado Avalanche lineup March 10, but was forced to leave the game with another possible head injury. 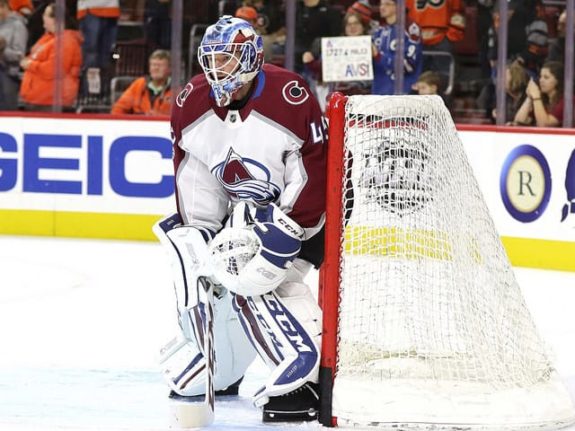 Johnson suffered an upper body injury Feb. 18 and is out indefinitely. As of March 2, he’s still potentially “weeks away” from a return.

Price suffered a concussion Feb. 20 and is out indefinitely.

Matthews suffered a shoulder injury Feb. 22 and is expected to miss at least one week. He’s been skating every day since the injury, but remains without a firm return date.

After returning from illness, Neal suffered a hand injury in his return on Feb. 26 and has missed the past seven games. He’s considered day-t0-day, but has been skating on his own every day.

McAvoy suffered a sprained MCL March 3 and will be re-evaluated in four weeks.

Bergeron is dealing with a fractured foot and is expected to miss two weeks, putting his likely return at the middle of March. Bruins head coach Bruce Cassidy said he doesn’t expect him to play on this current road trip.

Pacioretty suffered a knee injury on March 2, and will miss four-six weeks, all but ending his season.

Murray suffered a concussion in practice Feb. 26 and has missed the past three games. He skated on his own Monday morning.

Raanta suffered a lower body injury in pre-game warm ups March 5, and has yet to be able to return to action.

Marchand suffered an upper body injury March 10 and is considered day-to-day. He missed Sunday’s game as a result.

Backes was suspended three games for an interference incident on March 6. He’s eligible to return March 13.

Okposo suffered a concussion March 8 and is out indefinitely.

Bishop suffered a knee injury March 5, and has missed the past three games as a result. He skated without pads on Sunday, but remains day-to-day. 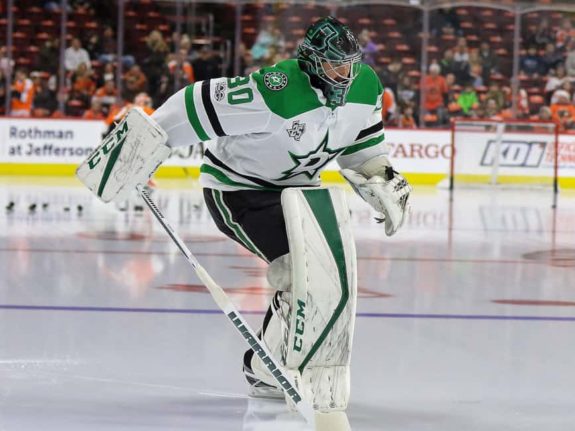 Nielsen suffered an upper body injury March 6 and has missed the past two games as a result. He’s considered day-to-day.

Klefbom has been ruled out for the next two games, as of March 10, to undergo a procedure on his shoulder.

Stone suffered a leg injury March 9, but the extent or severity is not yet known.

Boeser suffered a back injury March 5, and will miss four-six weeks.

Smith suffered an upper body injury March 6, and has missed the past two games as a result. He’s considered day-to-day.

Scheifele suffered an upper body injury March 6 and has missed the past two games. The Winnipeg Jets plan on “being careful” with Scheifele’s injury.