A franchise record nine straight wins, ten of their past eleven, and a full calendar month since the Calgary Flames last lost in regulation – a 5-0 setback to the Arizona Coyotes on February 13th that feels like an eternity ago.

It’s not just that the Flames are winning at this clip, it’s how they’re doing it.  With three decisive wins last week, highlighted by a 5-0 drubbing of the league’s second-hottest team, the Montreal Canadiens, the Flames are rapidly becoming a team that nobody wants to face in the playoffs.

There’s no hiding the fact that, to this point in the season, the Flames have been very fortunate to remain as healthy as they have.

Per NHL Injury Viz, the chart below shows each team’s CHIP (cap hit of injured players), which highlights not only man-games lost to injury, but the importance of those injured players to each team’s rosters.  Notice Calgary right near the bottom. 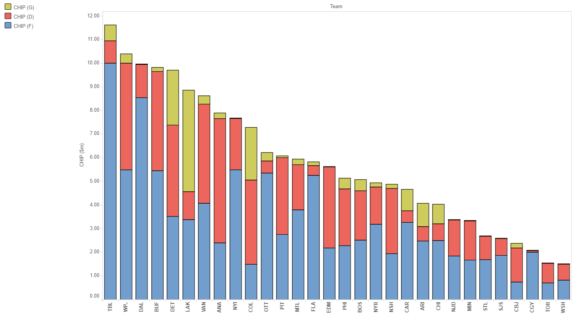 So, when Dougie Hamilton and Michael Stone both went down in Thursday’s win and did not return, it looked like might finally be Calgary’s turn to battle the injury bug, and the fear of Dennis Wideman returning to the lineup sparked a bit of panic among fans.

Thankfully, Hamilton has returned, and Stone’s injury is not as serious as first feared, so Wideman’s stay in the lineup looks to be short-lived.

#Flames Michael Stone skated on his own this morning, but Glen Gulutzan had no further update.

Regardless, in the four periods the team has played without Stone, they have yet to allow a goal, and looked extremely solid in the process.

With the high-flying Pittsburgh Penguins in town tonight, though, the task will be slightly tougher than it was on Sunday against the mediocre Winnipeg Jets.

Now with an eight-point cushion in the playoff race, it’s safe to say that the thinking can now shift away from just hanging onto a spot and more to who the Flames might face in the first round of the playoffs.

As everyone knows, the renewed Battle of Alberta in April would be an incredible series for fans and media alike across the province, and the prospect of it is exciting for everyone.  That being said, a quick look at the Flames’ records against each of their most-likely round one opponents might suggest otherwise:

Should the Flames finish in a wild card position, their first-round opponent would likely be either the San Jose Sharks or Minnesota Wild, who the Flames are a combined 5-1-0 against.  Finishing in either second or third in the Pacific Division, however, would see the team face either the Anaheim Ducks or Edmonton Oilers, where the Flames sport a combined 1-5-1 record.

Ultimately, securing as high a seed as possible is ideal – especially if it means home-ice advantage – but it’s worth noting how much the team has struggled against the technically lesser teams.

Starting with a date tonight with the defending cup champion Penguins, the Flames kick off a four-game home stand that will see the Boston Bruins, Dallas Stars, and LA Kings visit the dome this week.

Having come off back-to-back shutouts and not surrendering a goal in over a week, the Flames are in tough to continue that trend tonight against a Penguins team that boasts the league’s highest-scoring offense.  Doing so without Michael Stone means that the team must hope that the bottom pairing of Matt Bartkowski and Dennis Wideman aren’t victimized, and that Brian Elliott can continue his stellar play.

Things don’t get much easier after tonight’s game, as the Boston Bruins come to town on a tear, having won seven of their last ten and drastically improving their play after dismissing Claude Julien last month.

With a game in hand on the idle Ducks, a win tonight would see Calgary vault into second place in the Pacific, although still seven points back of the division-leading Sharks.