Josh Healey is both a professional hockey player and an entrepreneur who remembers the challenges he faced when he was younger and looking for direction in his hockey career. Because he was too small to be considered a serious prospect for the WHL, he decided to play in the Alberta Junior Hockey League (AJHL) for the Sherwood Park Crusaders, where he quickly grew and developed a reputation as a hard-hitting defenceman.

Healey remembers feeling confused and unsure about his options and who he should trust as an advisor for his hockey career when a few player agents approached him at the end of his junior career. He decided to accept an offer to attend Ohio State University where his reputation as a physical player continued while he anchored the OSU blue line for four seasons.

While pursuing his finance degree, he decided that he wanted to develop an app but was unsure what purpose it should serve. It was during his first season as a professional player with the Calgary Flames’ AHL affiliate Stockton Heat that he decided the app would be a platform to start a fund called The Sports Aux Player Fund, to help give kids the opportunity to play hockey. The challenge was how to get funding to support the cause. Hence the genesis of The Sports Aux App.

Drawing on Past Experience

It was a trip to a local sports store with his mother, Pam, that proved to be a tipping point for Healey. He remembers walking into the local Source for Sports store in Edmonton and being shocked by the price of hockey sticks: “The sticks were priced at $320 which was outrageous. There had to be a way I could help out kids (financially) that want to play, but their parents can’t afford it,” he said.

Healey decided to draw on his experience with player agents to develop a funding source. The strategy he decided upon was to build a library of testimonials from players about their agents and their coaches. “I saw a need to help players and parents with decisions regarding agents and coaches and tying that into a source of funds to help kids that don’t have the resources to play the game. There is nothing out there on agents or coaches that provide verified opinions from current and past players.”

Healey is convinced that today’s elite players and their families will welcome a digital source of information about player agent representation. The initial funding for the development of the new app was the signing bonus he received from the Calgary Flames.

Healey’s app will also serve as a source of player information for scouts, coaches, agents and data-hungry fans on one platform. Players are encouraged to register their profiles on the site with their statistics updated daily by the eliteprospects.com website. Players are asked to answer a series of questions about their past and present coaches and agents with an audit committee in charge of the integrity of the content posted on the site.

Where the site is innovative is that it provides both accountability and transparency regarding how players rate their coaches and agents on job performance. In the past, players looking for professional career advice were forced to find an agent on their own, usually dependent upon referrals from other players.

The Sports Aux App asks players to provide anonymous reviews of these hockey professionals on performance, reliability, communication (agents), and administration (coaches). The agents and scouts receive a score on a scale of 1-10, and the players are encouraged to offer comments. Healey wasn’t sure what to expect at first. “As far as comments were concerned, many reviews about agents and coaches have been positive, which will benefit them in the eyes of players that are looking for advice.”

According to Healey, the app has already attracted 430-440 verified players and 600-700 agents, coaches and fans since its inauguration on Jan. 23, 2019. “We are focusing on increasing our user base, and then we will look at ways to monetize the venture and allow us to create the fund to help kids in need. We want to build a large library of player views about agents and coaches and to sell access to that information possibly. That may take the form of a subscription service; whether that is monthly or yearly, we will work that out.”

What Does The Future Hold?

When asked about the future of the app, Healey was as aggressive with his vision as he is when he competes for the Heat. “We are looking at adding warm-up, cool-down, and stickhandling videos for both players and goalies. We want to establish partnerships with development leagues (AHL, NCAA, USHL, CHL) so teams can purchase the right to allow their players access to the app to help with their training and development. We want to be where everything or anything related to hockey is available.” 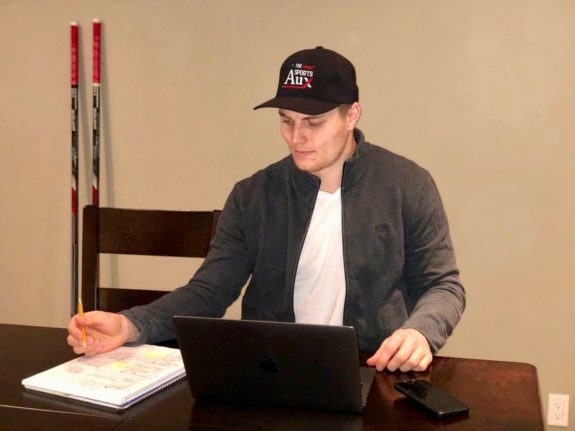 Healey’s value proposition to players and their parents is apparent:

I would hope that my app would help young players and parents make more informed decisions about their hockey careers and opportunities. We want to be a one-stop shop for players that don’t have access to the information they need or the resources to play the game.

I have never seen Josh play. Following our telephone interview, I came across a Twitter posting entitled “Wow. Does that Josh Healey kid ever hit hard”. After seeing the highlight video, I would put my money on Josh that The Sports Aux App will be a big hit with players, parents, and stakeholders in the hockey industry.