The THW Flames season preview highlighted 10 questions to monitor as the season progresses. Given that we’re now amazingly already just past one-third of the way through the regular season schedule, let’s reflect back on these burning questions and evaluate how the Flames are making headway with these respective issues.

{Click here to take a look back at my season preview and how I expected these questions to play out – Flames Season Preview: Brothers Sutter In The Line Of Fire – 10 Questions The Flames Must Answer}

1. Do the Flames now possess best blueline core in the NHL?

I discussed this in some detail back in October and the blueline has not disappointed. They were a little slow coming out of the gate and while I still don’t think they are firing on all cylinders, the Flames impressive group of rear guards are to be envied by the vast majority of NHL teams. Given that they currently sit 5th in the league in goals against reflects this past of the equation is working itself out. Of course, the other factors in this equation will be discussed below.

After watching Jay Bouwmeester live at the Saddledome from the lower bowl earlier this season, I observed:

“The super, silky smooth skating defenseman possesses an elite offensive and defensive awareness and a quantum level overall hockey IQ. From his enthusiastic skating to those loose pucks in the corner, to his constant head’s up ice surveillance with and without the puck, this guy is a rare breed indeed.”

Phaneuf has been up and down for a large portion of the seaon, but his play has steadied as of late. Sutter’s maintaining of the pairing of Phaneuf and Regehr is now starting to pay dividends as Phaneuf seems to be learning what it takes to be a true shutdown defenseman. While he still has a lot of growing and learning to do, he is definitely showing improvement – picking his hitting spots much better without leaving himself out of position as well as picking his spots when to join the rush in the same fashion.

Sarich is currently out with a lower body injury and the Flames had Regehr out of the lineup Monday night against the Kings as more of a precautionary measure.

2. Will the three year inflating goals against average and save percentage trend continue for Miikka Kiprusoff? 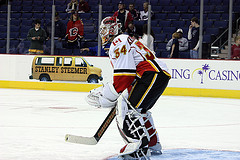 As I stated in the season preview, I suggested:

“The less porous defense, as noted above, a Flames team fully up to speed with Brent Sutter’s “system”, and a slightly less workload should all add up to Vezina-candidate type year for Kipper.”

Admittedly, I could not fathom just how superb Kipper would be. He currently stands at 5th in GAA in the league with a 2.21 GAA and tied for 4th with a .927 save percentage. More than his numbers, however, Kiprusoff has his brilliant reflexes and rebound control skills are honed in at this point of the season.

Oh yeah – in case you’ve missed it he might have made the save of the decade on Saturday night against the Sharks:

As well, in case you missed it, here is my interview with possibly the next Kiprusoff – prospect Joni Ortio.

I touched on Phaneuf’s play above. Erratic, inconsistent, but at times brilliant and dominant summed up his play early on. Again, being reunited with his junior coach with the Red Deer Rebels of the WHL, Brent Sutter, and being paired with defensive stalwart Robyn Regehr seems to be having its desired effect as Dion has steadied his game as of late. The Flames will be counting on him to continue his progression and elevation of his all around game.

4. Who will be the Flames #1 left winger, playing with Jarome Iginla and Olli Jokinen?

This is the $12.25 million dollar question (Iginla’s and Jokinen’s combined salaries this year).

Moss, Glencross, Bourque, Nystrom, Boyd, Sjostrom and most recently Nigel Dawes have all been auditioned and trialed by fire, with mixed results.

Ironically, possibly the player showing the most chemistry with the Flames recently got sent back to the minors with Bourque’s return from injury – Jamie Lundmark and his cap and waiver friendly 2-way deal. It was no surprise that Lundmark made his way back to Abbotsford in this age of the salary cap, but his hockey IQ and vision really helped him click with Iginla and Jokinen.

*Lundmark, the consummate professional, took the demotion in stride. The following clip is a re-enactment of when Lundmark received notice. The part of Lundmark is being played by Clark Griswald via Chevy Chase, with Darryl Sutter’s name being changed to Frank Shirley. {Fast forward to the 3:30 mark of the video to get to the point.}

5. Is Curtis McElhinney the answer as the backup goaltender?

McElhinney’s curse seemed to be well into effect again this season. In his opening game of the season, he was less than stellar in giving up 4 goals to the Stars in a loss at home.

To his credit he came back strong in his second game, also against the Stars, but this time on the road in Dallas. The Flames lead 1-zip going into the 3rd period and Curtis seemed unbeatable. The Stars stormed out in the 3rd, however, and took a 2-1 lead. Seemingly not wanting McElhinney’s effort go to waste, the Flames tied it up in the last minute of the 3rd and went on to win in OT. The backup backstop had 40 saves on the night.

He got his 2nd win on November 28th in a shootout win over the Blue Jackets. He now sits with a solid 2-1 record, giving the Flames what appears to be a reliable backup. His consistency, of course, will have to be monitored as the season moves along.

6. Do the Flames have the best 4th line in hockey?

As I reported in the season preview:

Ability to chip in offensively? Check.”

As the season has went along, the inevitable line shuffling has also presented itself, making it difficult to clearly analyze this question. Brian McGrattan occasionally suits up and both Sjostrom and Nystrom have been moved throughout the lineup (even the odd 1st line shift!) when called upon to fill in.

7. Is adding another Sutter to the mix good for the hockey club?

Without a doubt, one of the best off-season signings in the NHL, Brent Sutter may not be amongst the 20 see the ice game-day, but his impact is evident game in and game out.

The Flames expectedly took some time to learn his precise positioning style of play and, in fact, continue to grow in this system. However, the Flames record already shows Sutter’s presence has been felt.

Of course, when the Flames have on ice performance has not been up to snuff, Sutter could always break out his infamous gauntlet.

8. Who will be this year’s breakthrough player?

My pick for this season’s edition of breakthrough player of the year was Mark Giordano, as I noted:

“His mobility, agility, high hockey IQ and puck poise will all finally come together this season for the undrafted free agent signed in 2004.”

“Gio” has been solid and had a great start to the season. I have liked his all around play, but he can be out-muscled in the defensive zone. He is capable of even better offensive numbers.

With 16 points in 28 games and now seeing time on the #1 line, Nigel Dawes might come out of the season with this unofficial award.

9. Do the Flames have enough fire power? 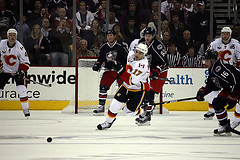 Thus far, my projections have come to fruition as although the Flames have dropped to 10th in goals for from 7th overall last season, the Flames have improved significantly on the defensive side of things moving up to currently 5th best in the league after finishing 17th last season.

Iginla’s annual November revival, Jokinen play of late, Bourque’s further emergence along with a balanced attack have proved to be an adequate offensive force. No doubt GM Darryl Sutter will be surveying league wide should the opportunity arise to improve this further if he feels it’s required.

10. Should the Flames have signed Theoren Fleury?

“In the end, it was more about Fleury leaving hockey on his terms. Despite not playing in any regular season games or even signing a contract at all, he got what he wanted. He got reinstated by the NHL and will now retire as a Calgary Flame. As an aside bonus, he gets some publicity for his upcoming tell-all book. For Theo, this was about closing a dark chapter in his life and he could not have done it in a classier fashion.”

I’d like to supplant question #10 with this bonus question:

*Will one particular game prove to be the spark that ignites a red hot season?

Last season, the November 13th 6-1 blowout loss to the Sharks in San Jose was deemed to be just that turning point in the season after which the Flames played with much more vigor.

This season, the obvious culprit might be the 7-1 embarrassing loss at home to the elite young gun squad out of the Windy City – the Blackhawks. Since that game, the Flames have looked extremely solid, topped off by its strongest performance of the year, a 2-1 victory over the league leading Sharks. While losing last night to the Kings 2-1, the Flames still finished up their longest road trip of the season an impressive 4-2.

There are many more questions and issues to discuss and future articles will attempt to address some of these intriguing matters.